Butera Does It All In Red Raiders’ Win Over Falls

Jamestown’s Jaylen Butera hauls in a pass from quarterback Trey Drake (5) that resulted in a touchdown in the fourth quarter. P-J photo by Scott Kindberg 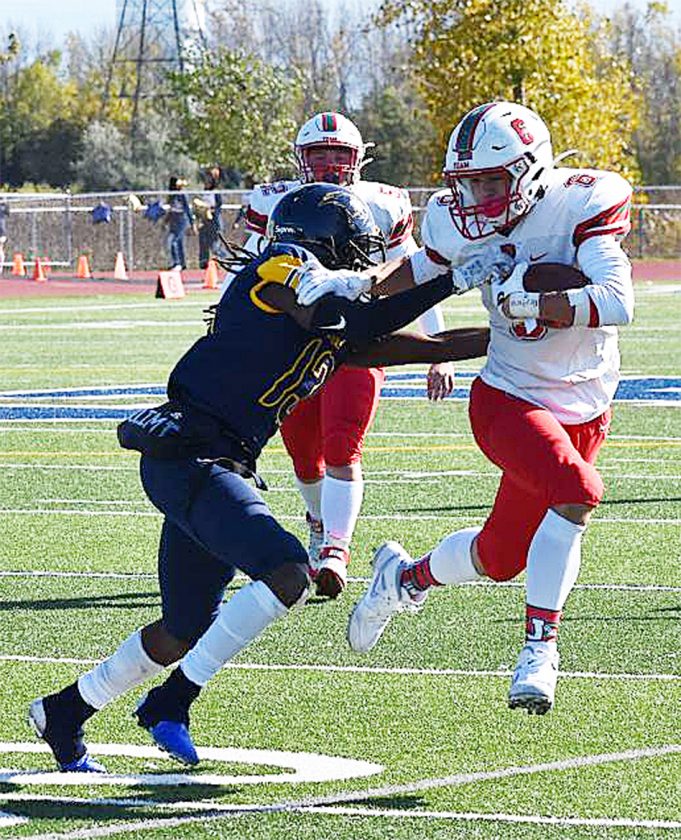 NIAGARA FALLS — Carrying a large, red flag — the familiar green “J” smack dab in the middle of it — Jaylen Butera led the Jamestown Red Raiders onto the field for their Class AA football game at Niagara Falls High School on Saturday.

As it turned out, it was only fitting, because the sophomore running back was the standard bearer all afternoon anyway.

Playing a little over three quarters before leaving with an injury, Butera logged 228 all-purpose yards — 136 on the ground, 46 on three pass receptions, including a touchdown, and 46 more on a kickoff return — to lead Jamestown to a 39-24 victory over the Wolverines.

The win raised Jamestown’s record to 5-1 overall and 4-1 in the division, setting up a showdown with unbeaten Orchard Park (6-0, 5-0) next Friday at Strider Field. The winner of that game secures the division title.

Another strong game from Butera would pay huge dividends. 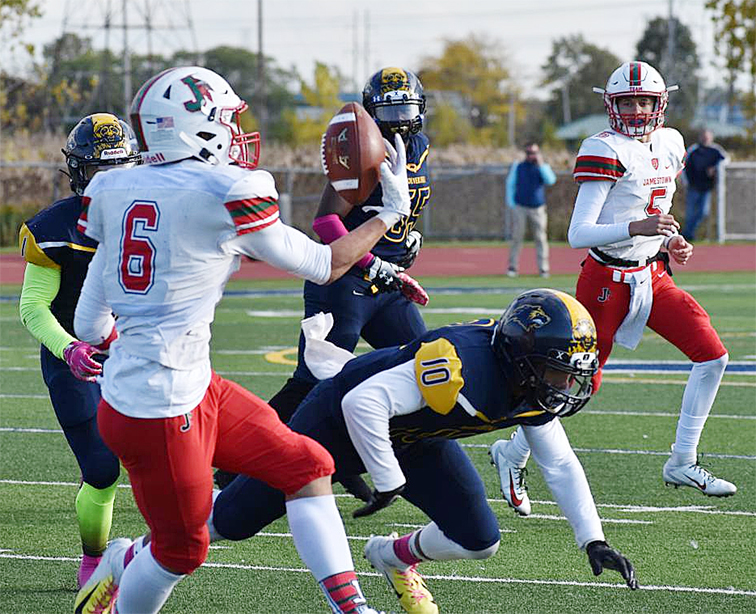 Jamestown's Jaylen Butera hauls in a pass from quarterback Trey Drake (5) that resulted in a touchdown in the fourth quarter. P-J photo by Scott Kindberg

“He’s a really special player,” Red Raiders’ coach Tom Langworthy said. “When he runs the ball, his vision and cuts and how tough he is to bring down is really unique, it’s really special.”

Against Niagara Falls (4-2, 3-2), the 6-foot-1, 176-pounder was the best player on the sun-splashed, but windswept field, although he didn’t begin to exert his dominance until the Red Raiders were already in front, 7-6, midway through the first quarter. On his first carry, he gained 12 yards. When his number was called a second time on Jamestown’s third possession he ripped off another 22.

And after Niagara Falls took its only lead of the game, 12-6, in the second quarter, Butera returned the ensuing kickoff 46 yards to help set up freshman quarterback Trey Drake’s 34-yard pitch and catch to junior Elijah Rojas, who slipped a couple tackles on his way to a touchdown.

Butera was just getting started.

He gained 30 yards on the first drive of the second quarter, culminating in a 2-yard touchdown plunge by junior Savon VanSickle (24 carries, 113 yard, three TDs) that pushed Jamestown’s lead to 21-12 with 6:24 left in the first half. For good measure — after a Cam’ron Mays interception — Butera had runs of 28 and 16 yards that set up Andrew Dix’s 32-yard field goal that extended the Red Raiders’ advantage to 24-12 at the break. 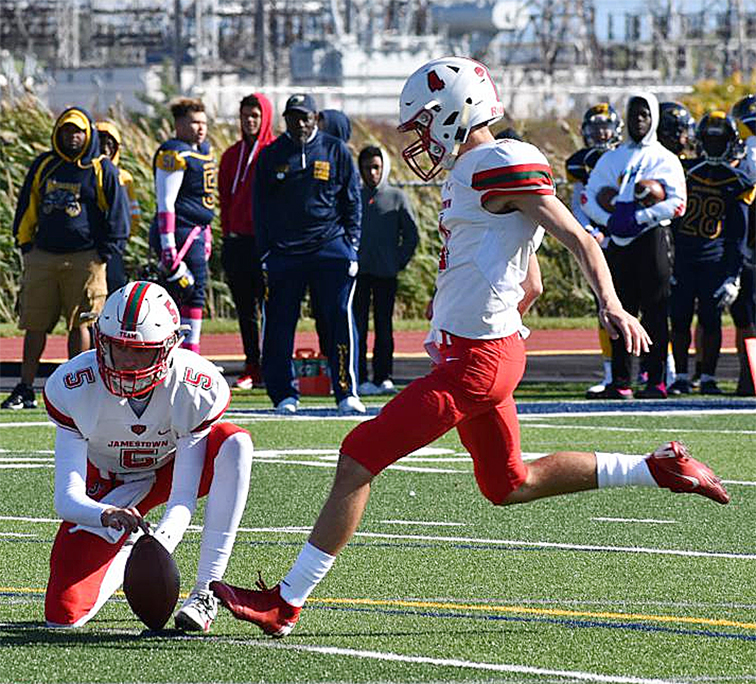 “He’s completely unselfish, he’s just all about the team and he’s super coachable,” Langworthy said of Butera. “The teachers at the school rave about how nice he is. … Some of the teachers at the beginning of the year didn’t realize he was such a good player, because he’s so humble. He has great character. He’s making a lot of great plays on both sides of the ball.”

In the second half, it was more of the same.

After the Wolverines used another long TD pass to cut the deficit to 24-18 early in the third quarter, Langworthy went back to his Mr. Reliable and Butera didn’t disappoint, combining two carries and two receptions into 39 yards that gave Jamestown a first-and-goal at the Niagara Falls’ 10. Three plays later, VanSickle scored his third touchdown of the afternoon with 3:16 remaining in the period.

Any excitement from that touchdown, however, was quickly erased. On the play, the Wolverines’ Matthew Kaminska was injured and he laid motionless in the end zone for an extended period while players from both teams took a knee at that end of the field. Upon being treated by trainers and medical staff, Kaminska was placed on a stretcher and into a waiting ambulance.

When play resumed, Drake connected with Demarri Jones on the two-point conversion pass, building the Red Raiders lead to 32-18. Four minutes later, Butera capped his banner performance when he caught a swing pass from Drake and took off toward the end zone 18 yards away and dove to the pylon for the touchdown. Shaken up on the play, Butera watched the final 11 minutes from the sideline, but with Jamestown armed with a 39-18 lead following Dix’s fourth successful point-after boot, the visitors were in control.

“As (Butera) grew older, you can see how special he has been,” said Langworthy, who had Butera as a student in middle school. “It’s fun to coach kids like that. He just listens to everything and he’s just willing to do whatever it takes to help the team win and those are the type that make you excited as a coach.”

When the game ended and the teams exchanged handshakes, Langworthy gathered his players at the scoreboard end of the field to congratulate them on their third straight victory, which sets up their showdown with Orchard Park.

“Their quarterback (Jack Sharp) is tough, they like to throw the ball around, they play good defense and they have a couple good linebackers,” Langworthy said. “Like I told the guys, if they want this, they got this. It’s in the palm of their hands, and you don’t get to play for a championship every day, so when you do you want to make the most of it.”

For one day, though, Jamestown could bask in the glow of an impressive win against a very good Niagara Falls team. And while Butera’s long walk to the locker room did not include the flag that he carried onto the turf nearly three hours earlier, the message that appeared under the green “J” — “Raider Pride” — certainly applied.

“This is a really good win on the road against a team that had a lot of momentum, so I feel good about it,” Langworthy said.