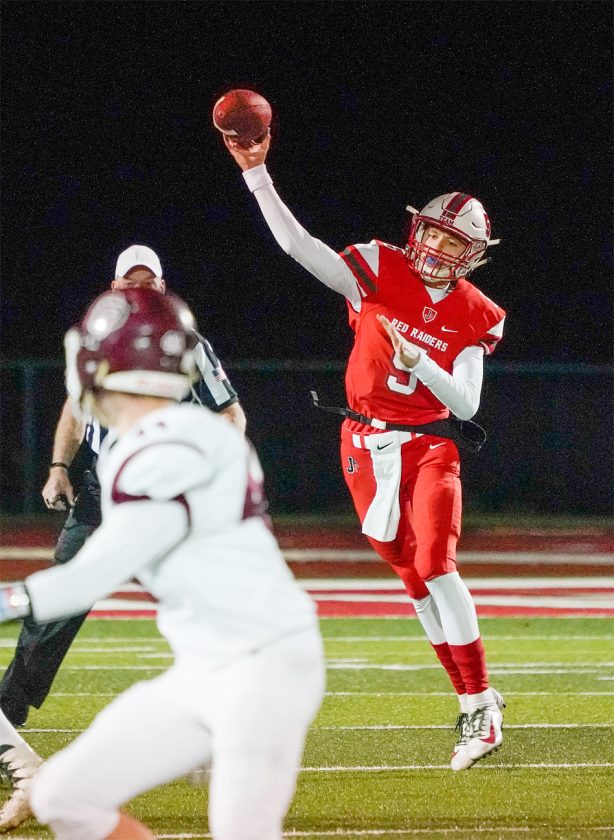 Orchard Park’s Jack Sharp is a special quarterback, a talented and poised senior who is capable of making all kinds of throws.

Jamestown has a signal-caller that appears headed in that direction, too.

Freshman Trey Drake completed 8 of 15 passes for 173 yards and two touchdowns, including a third-down, 44-yard strike to Simeon Leeper with under eight minutes remaining, and then watched his defense intercept Sharp twice in the closing moments to spark the Red Raiders to a 16-12 victory over Orchard Park at Strider Field on Friday night.

The win not only improved Jamestown’s record to 6-1 overall and 5-1 in the division, but it also secured its first Class AA regular-season title since 2014. The Red Raiders, the No. 1 seed, will now meet Frontier next Friday, back at Strider in the Section VI quarterfinals. The Quakers, the 12th-ranked team in the state, fell to 6-1 and 5-1. 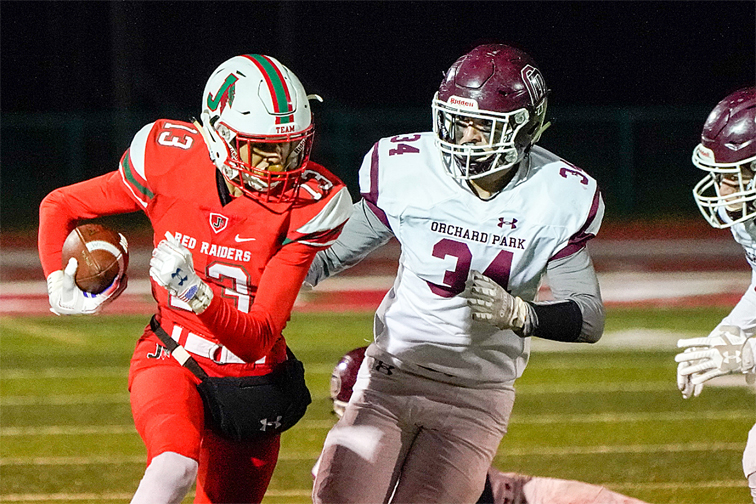 Jamestown’s Simeon Leeper takes off after making a catch while being pursued by Orchard Park’s Kross Rapini during Friday’s Class AA football game.

The “Jamestown way” this season has been heavily loaded on the running game, given the explosive talents of juniors Savon VanSickle and Demarri Jones and sophomore Jaylen Butera, but on a night when rushing yards were hard to come by Langworthy went to the air at critical times, and his young quarterback delivered.

Never bigger than early in the fourth quarter with Orchard Park leading, 12-9.

Facing a third-and-19 from the Quakers’ 44, Drake dropped back and found Simeon Leeper open down the left sideline. The tall wideout made the catch and then raced into the end zone for the go-ahead score. Andrew Dix booted the extra point and Jamestown led, 16-12, with 7:40 remaining in the game.

It was the final points of the cold evening. 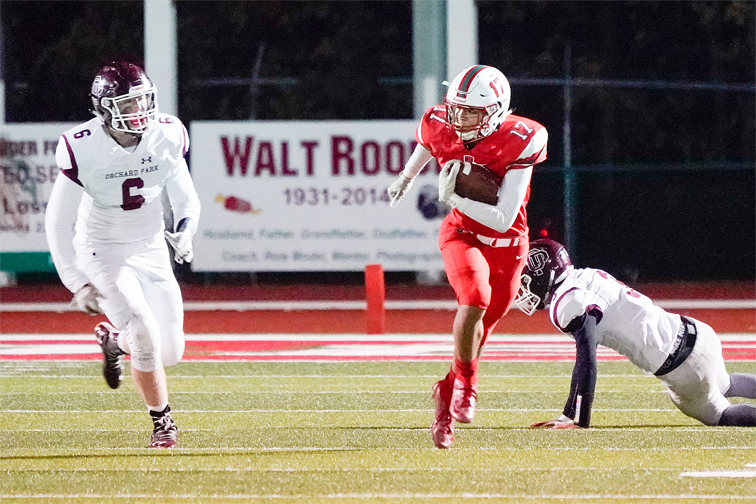 Jamestown’s Elijah Rojas (17) sprints away from an Orchard Park defender after making a catch.

The Red Raiders opened the scoring on Drake’s 43-yard touchdown pass to Jones with 1:09 left in the first quarter. Dix’s extra-point try made it 7-0.

Orchard Park answered right back with a 65-yard drive, capped by Sharp’s 9-yard pass to Peter Liberatore. The two-point conversion pass was incomplete, however, and Jamestown remained in front, 7-6, with 9:19 left in second quarter.

The Quakers had two golden opportunities to take the lead later in the period, driving into Jamestown’s red zone, but on both occasions the Red Raiders’ defense stiffened, stopping their rival on a pair of fourth-and-1 plays, and the half ended with Jamestown leading, 7-6.

An interception by Charlie Bartolotti on the Red Raiders’ first possession of the second half set up the Quakers’ go-ahead TD, courtesy of Sharp’s 1-yard burst. The two-point conversion pass was incomplete, but Orchard Park took the lead for the first time, 12-7, with seven minutes left in the period.

Following that score, the game really took a crazy turn. The Red Raiders moved the ball from their 38-yard line to the Orchard Park 1, but they were unable to punch it in on three tries. On the Quakers’ first play from scrimmage, however, Sharp was sacked by Jamestown’s Jadiel Johnson in the end zone for a safety, pulling the hosts to within, 12-9, inside the final two minutes of the third quarter. 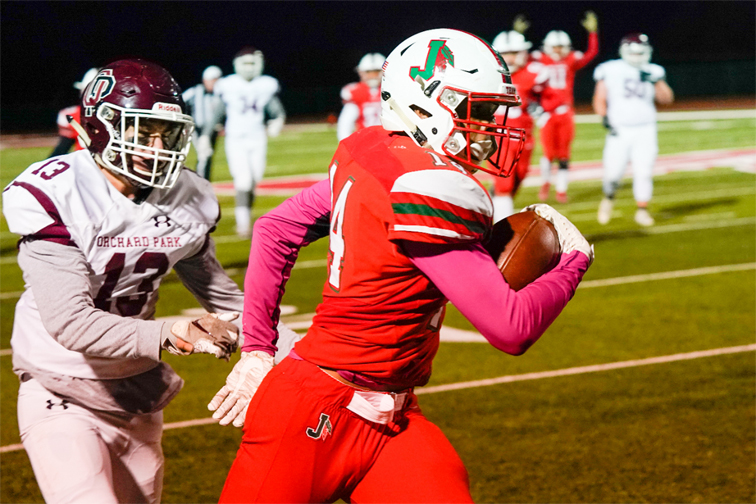 Jamestown’s Demarri Jones takes off down the sideline on his way to a first-quarter touchdown in Friday night’s Class AA football game against Orchard Park.

Jamestown forced an Orchard Park punt and the Red Raiders took advantage when Drake hit Leeper on the decisive 44-yard TD pass on third-and-19. Leeper had a magnificent game, catching three passes for 84 yards; Jones had four receptions for 71 yards; and Elijah Rojas had a 28-yard catch and run.

The big plays continued for the hosts, and this time it was the defense’s turn.

On the Quakers’ seventh play after the Red Raiders’ TD, Sharp’s pass was tipped and it was intercepted by Butera with 4:49 left in the game. The Quakers forced a punt and Tristan Lancaster returned it to the Jamestown 42 with 2:28 remaining, but on the first play, Markell Carter picked off Sharp again, giving the Red Raiders a first down at their own 38 with 2:16 left. The hosts were able to run out the clock, and the celebration was on.