Trojans Up To Coach’s Challenge At Portville 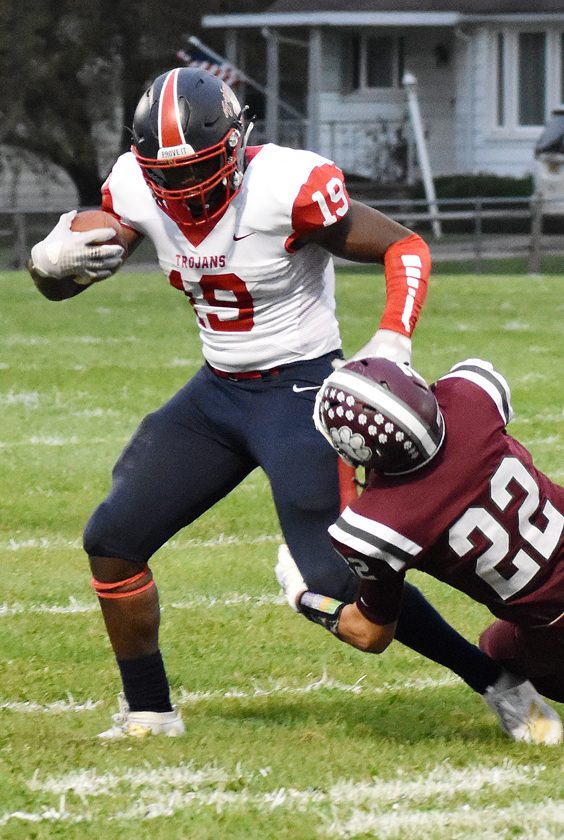 Tywon Wright, above, is their top rusher with 438 yards and six touchdowns. P-J photo by Jay Young

PORTVILLE — In the lead-up to a Week 2 meeting with Class C South opponent Portville, Southwestern head coach Jehuu Caulcrick had a goal in mind for his offensive line.

“I challenged the offensive line because I was disappointed in the way we ran the ball last week,” the Trojans head coach said.

That challenge was certainly answered on Friday night, as Tywon Wright and Conrad Thomas combined for 251 yards and three touchdowns on the ground to lead Southwestern (2-0) to a 40-8 win over the Panthers (1-1).

“Those guys played well, but it is a credit to the guys up front,” Caulcrick said. “I put a challenge out to them and they came and they answered.”

Apart from a minor blip during the third quarter when the hosts would pick up their only score of the day on a muffed punt, Southwestern suffered little adversity. 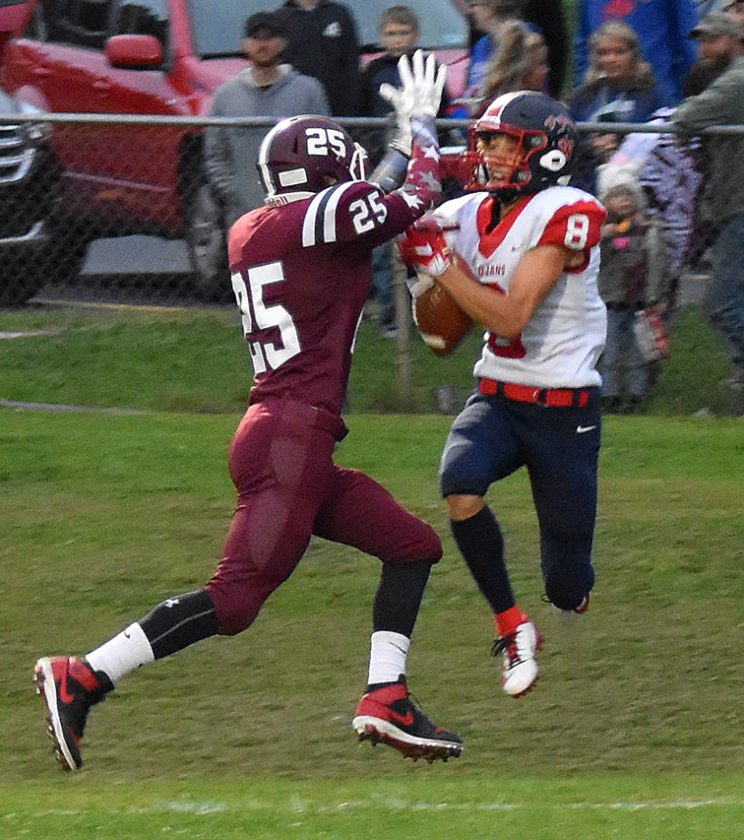 From the very first series of the day, Wright would have success in the backfield, breaking out for a rush of 18 yards on his first carry. Zishaun Munir would add a rush of 5 yards and would also haul in a pass for 7 more on a throw from Aidan Kennedy to continue Southwestern’s early march down the field. The Trojans would strike first when Kennedy found Garrett Swan in single coverage on the left side for an 18-yard touchdown strike to open up the scoring.

The Panthers would dig themselves a quick hole following that opening drive from the Trojans. On his first play back under center, Panthers quarterback Mike Stillman would look for a short swing pass out to the right side that was read and intercepted off by Dominic Certo for a 35-yard pick-six.

“It’s just him doing his job,” Caulcrick said of the interception. “We talk about each guy defensively doing their individual job and he came up big. It’s his birthday today, so he had to make some plays.”

Thomas would force another three-and-out from the Panthers, picking up a big sack near the end of the first quarter before getting an opportunity to show what he can do on the other side of the ball. With 7:12 remaining before halftime, the 6-foot-5 220-pound back took a handoff while in motion, sweeping his way from left to right and finding a gap to the second level for a 64-yard scamper which would grow the Southwestern lead to 20-0 after a kick by Nate Card.

On defense, Portville would find glimpses of success with their rushing attack and screen attempts to running back Jayden Lassiter, but time and time again the Trojans were able to force punts.

“We played that bend-but-don’t-break defense,” Caulcrick said. “We were really concerned with their screen game because we knew they were going to try and use our aggressiveness against us on the defensive side of the ball. So that was a big emphasis this week in practice.”

Kennedy would grab his second touchdown pass of the day on a 52-yard beauty up the middle of the field to Certo with 4:56 remaining in the third quarter.

Southwestern would add to its offensive total on bruising runs of 1 and 2 yards from Thomas and Wright, respectively, down the stretch.

NOTES: Kennedy would end his day 5 for 12 through the air for 114 yards. … Wright grabbed 126 yards on 20 carries while Thomas added 125 yards on five carries, also picking up 12 tackles, including four for a loss. … Gaven Dewey added six tackles for the Trojans and Cooper Pannes 11, including one for a loss.