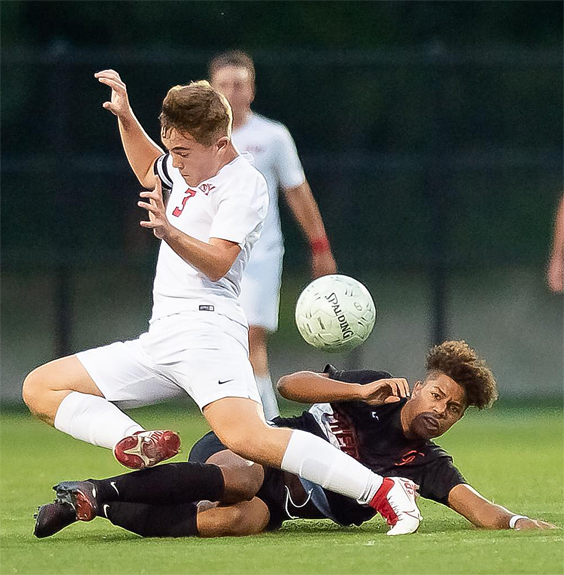 FREDONIA — Under the lights at SUNY Fredonia on Monday night, the Southwestern Trojans brought their best to the Fredonia Hillbillies, rolling to a 6-0 victory in a Chautauqua-Cattaraugus Athletic Association Division 1 West boys soccer game.

“The first part of the first half was our best play of the season so far, then that first few minutes of the second half was exactly how we needed to come out,” Southwestern coach Jason Deering said.

Added Fredonia coach Jim Rush: “Against a team like them, you can’t start slow. Once we settled in, we were fine. We’re learning and getting better each game.”

“Two-goal leads are the most dangerous leads in soccer, we needed to put at least a goal on. They did more than that. It was fantastic to watch,” Deering said.

The other Southwestern (2-3) goals came Simon Pirrello, who had two, Max Vaughn, McKay Young, and Michael Carnes, as the scoring distribution came pretty evenly for the Trojans. Declan Brown turned away every shot he faced in net, including a couple nice saves in the latter part of the first half. Deering knows that his team is starting to find their way.

“We’re not quite there, but it’s starting to come together. It’s fun soccer,” Deering said.

Southwestern will next move on to play Olean on Friday night, and Deering knows that game, just like any other, won’t be easy.

“Olean is always tough. Fredonia is too. You have to show up in our league. We have to be prepared,” Deering said.

Meanwhile, on the Fredonia (0-3-1) side, there are some positive notes to take away, like their play in the second half. Rush knows that every game has a learning experience, but he won’t dwell on the past.

“I won’t stand there and talk about the game to my guys. They were there. They know what happened, and it just happens sometimes,” Rush said.