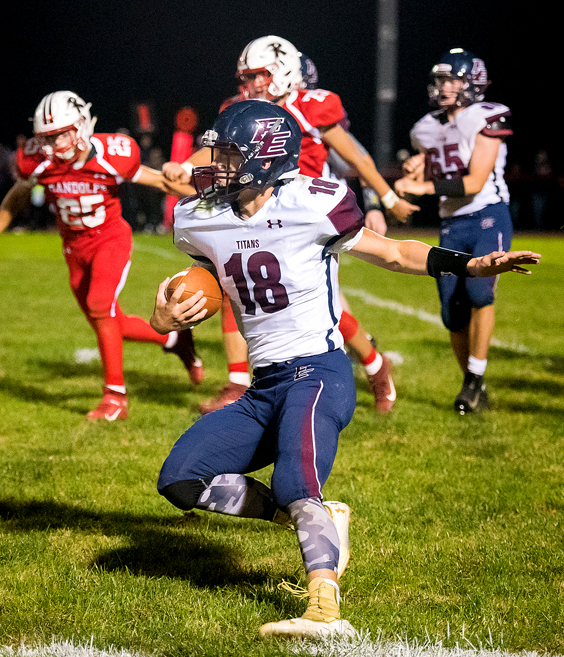 RANDOLPH — Through two weeks, Franklinville/Ellicottville’s defense has given up just two scores.

The Titans’ latest dominating performance came Friday night in Randolph where they held the Cardinals to just 57 yards of total offense in a 28-6 Class D victory.

“Our line was outmanned,” Randolph head coach Brent Brown said. “When you get in the trenches, we have some young kids down on there. They just couldn’t handle those kids.”

Quarterback Logan Frank was the engine behind the Franklinville/Ellicottville offense, rushing for 177 yards on 20 carries, including three touchdowns. Jordan Grinols added 101 yards on 14 carries for the Titans, who ran for 353 yards in all. 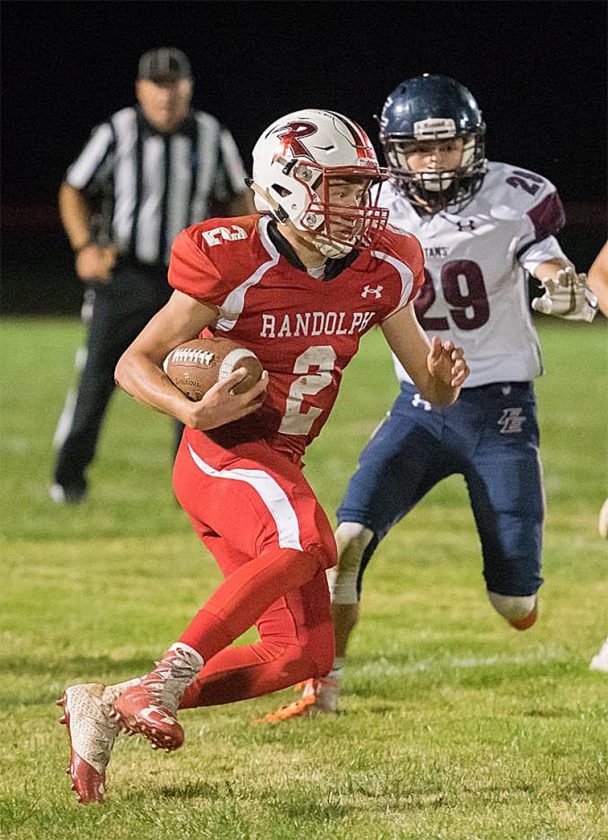 “We knew we were going to have to really grind one out. With the wind blowing the way it was, we knew it was going to be a ground game,” Franklinville/Ellicottville head coach Jason Marsh said. “Whoever got their ground game going the best was probably going to win this game. We really emphasized to our guys to dig in in the trenches and move bodies.”

Randolph struck first on its second possession of the night as Isaac Hind went 38 yards on a last-second pitch from quarterback Ty Hind to set the Cardinals up with a first-and-10 from the 22-yard line. Two plays later, Xavier Hind took another Ty Hind option pitch 22 yards for a score and a 6-0 lead.

“Randolph always runs that option really well. It forces you to play assignment football,” Marsh said. “We blew a couple of assignments there and they got some big plays.”

From there, it was all Titans.

Randolph’s Josh Brown sent a punt 56 yards on the second play of the second quarter to start Franklinville/Ellicottville on its own 32-yard line.

On the first play from scrimmage, Frank went 68 yards off the left side of the Titans’ offensive line for a touchdown that made it 7-6 after Bryce Butler’s first of four successful PATs.

“I think it was kind of off-tackle on the far side of the field,” Brown said of the run. “We’ll have to look at that and see.”

Brown’s next punt netted 36 yards after touching down in the end zone 56 yards away, but again on first-and-10 from their 20-yard line, the Titans shifted the field quickly as Tyler Clear went straight through the middle of the Randolph defense for a 50-yard run.

A late hit tacked on another 15 yards and five plays later Frank plunged in from 1 yard out to make it 14-6 heading into halftime.

“Field position is everything, especially on a night like tonight,” Marsh said of the big first plays following the punts. “The wind was howling … being able to grind it out and get that field position back in our favor was huge.”

Franklinville/Ellicottville added on late in the third quarter as a third-down pass interference penalty extended its drive. On the next play, Grinols burst through the Cardinals defense for a 40-yard touchdown run that put the game away.

“Logan (Frank) does a lot for our offense, but we have other running backs who are moving that pile as well,” Marsh said. “Jordan Grinols came out and ran the ball really hard in the second half. It was great to get him going.”

The Titans’ final drive covered 75 yards in nearly seven minutes and was capped by Frank’s third touchdown run, this time from the 3-yard line.

“Last year we kind of had our way with them. They were in our boat last year. They returned nine on each side of the ball (this year),” Brown said. “The quarterback is a good runner. He dragged the pile.”

The win sets the Titans up with a showdown next Friday night in Ellicottville against Clymer/Sherman/Panama, which beat Section V-Geneseo in Week 1 and plays at Silver Creek in a nonleague matchup tonight.

“We are going to see what we are made of next week,” Marsh said. “C/S/P is the defending state champ for a reason. They are well-coached and they have a lot of great athletes over there.”