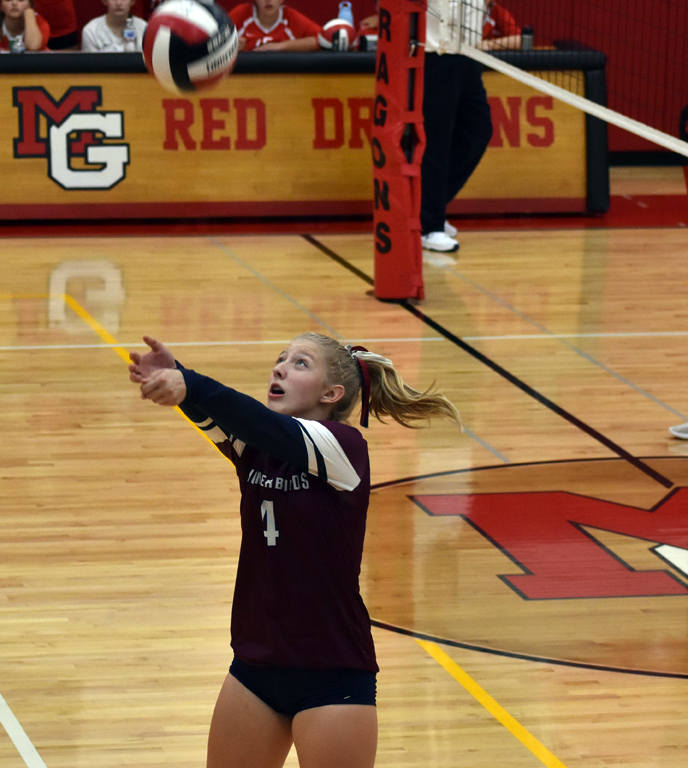 Chautauqua Lake (2-0, 2-0) and Maple Grove (0-2, 0-2) were both fielding young lineups for Thursday’s Chautauqua-Cattaraugus Athletic Association Central Division volleyball meeting, but it was the Thunderbirds who could have been mistaken for veterans as they claimed a 25-14, 25-18, 25-16 win, their second of the season.

“We had some major losses,” admitted Chautauqua Lake coach Joanne Meadows. “But I think the thing I love the most about coaching at Chautauqua Lake with our modified coach, and my brother our jayvee coach, is that it’s never a team for us. It’s always a program. I feel like, even though we lost some huge people, we have two eighth-graders who moved up and have stepped right in. I feel like that is going to be the case for a while. We just have a lot of talent all the way through the program.”

In years prior, the Thunderbirds have on occasion had their offense filter through one or two strong hitters, but this season could offer a more spread-out look.

Sophia Woodis picked up an overhand winner early in game one, and the Thunderbirds opened up a lead after Lily Woodis struck a hard return on a soft ball and a Jenna Waters set to work on the service line.

Maple Grove would return fire at the midway point, as Bre Hill ripped a kill down the line and added another overhand winner, but by that point the visitors were already looking at a 17-11 lead. 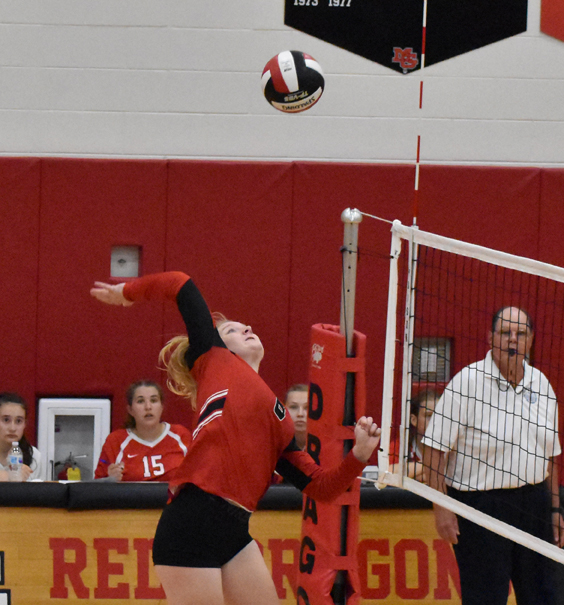 After a pair of great defensive saves by Waters and Lily Woodis, the Thunderbirds would take advantage of two misses for the final two points of the opener.

“Chautauqua Lake is always a great program and I always say their defense is phenomenal. It’s hard to play against them,” said Maple Grove coach Bayley Johnson, who is without six graduating seniors from last season. “This team this year is young and I’m very excited about it. They come to practice every day and work hard and I’ve already seen the progress in every match we have played. I think as we go down the line it’s going to be a good season for us. Bre Hill is a senior, she’s great player and a leader for the team. She’s going to be a big factor for us this year.”

The second game of the evening offered a perfect example of how hard Chautauqua Lake can be to play against once it gets a lead.

A few missed balls from Maple Grove were compounded by the strong serving of Mollie Meadows as Chautauqua Lake raced out to a 10-1 margin early.

The Red Dragons would improve their offense with some better serving after that start, but the lead was maintained all the way to 17-10 as Meadows set Sophia Woodis for a kill and Waters continued her strong defensive play with a difficult save.

The Thunderbirds would put a second game in the bag with a serve from Lily Woodis that could not find it’s way back over the net.

“I think the way they play together is what I really appreciate,” said Meadows. “I think this year we just have kids that play together well. We played in a tournament and they said it was hard to pick who our team leaders were because there’s not one standout. Sometimes that is tough, but I think with these kids that has turned into a strength of ours.”

Maple Grove would find its footing during the early stretches of the third frame, battling with Chautauqua Lake all the way to an 8-8 deadlock. A tip winner by Sophia Woodis and a missed overhand from the Red Dragons would give the Thunderbirds a three-point margin, and from there serving by Waters and more strong play by Lily Woodis would carry the visitors over the finish line.