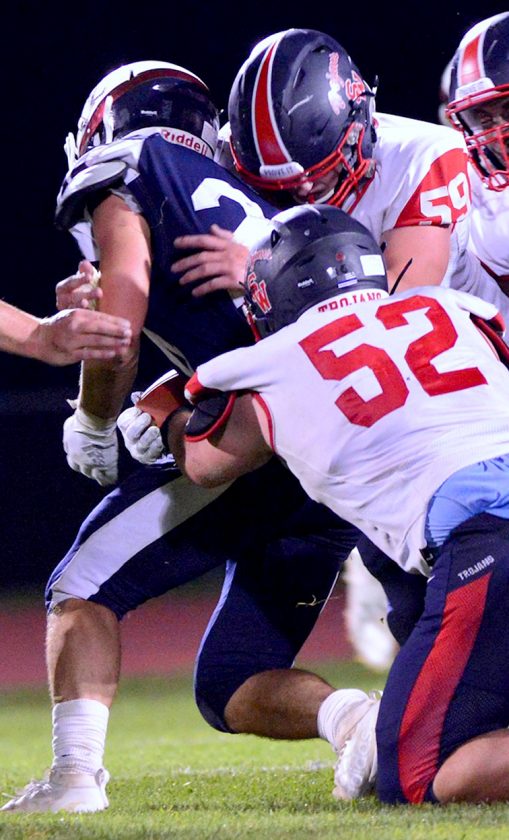 MAYVILLE — Jake Burkholder’s first game as defensive coordinator for Southwestern could not have gone any better.

The Trojans held Chautauqua Lake/Westfield/Brocton to just 115 yards of offense and turned three turnovers into a pair of touchdowns en route to a 42-0 shutout Saturday night.

“That’s definitely what you want from the defensive side of things. It makes it a lot easier for the offense and a lot easier calling plays,” Southwestern head coach Jehuu Caulcrick said following the game. “(Burkholder) did a great job of preparing the kids. He has a great scheme that is working for us right now.”

The highlight of the night came with 4:39 left in the first quarter when Conrad Thomas, a 6-foot-5, 220-pound transfer from Dunkirk, burst into the Thunderbirds’ backfield to pick off a pitch to the running back and raced 70 yards to the end zone to give Southwestern a 14-0 lead after Nate Card’s second of four successful first-half PATs. 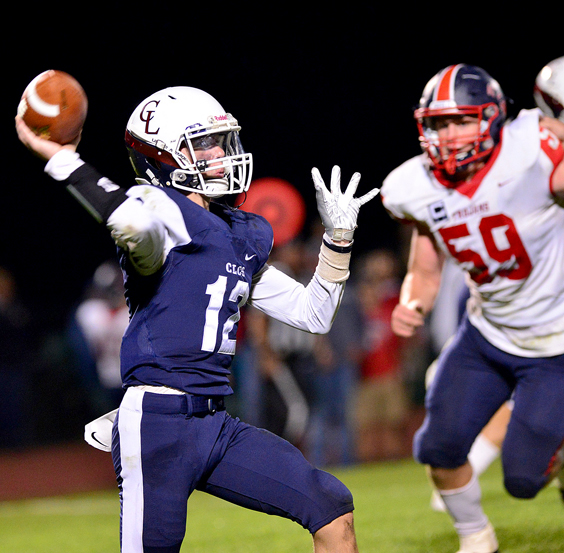 “Conrad is a heck of a player,” Caulcrick said. “He did that same thing in practice going against our No. 1s. The way you practice is what is going to happen in the game. He did that.”

Thomas and junior Drew Wigren led the Trojans with 11 tackles apiece while Zishan Munir had nine.

“With this type of defense, everybody has to do their job,” Caulcrick said. “We are bigger, stronger, faster and more athletic than we have been in the past. We are trying to use that to our advantage.”

The loss spoiled the debut of Chautauqua Lake/Westfield/Brocton’s Bryan Bongiovanni, who wasn’t officially approved as head coach until late summer and not even one half into his first game on the sidelines had to deal with an injury to his starting quarterback Zach Martin.

“We knew with the program that Southwestern has that it would be a challenge,” Bongiovanni said. “We feel we can play with anybody. What we asked of our boys was to play hard every single play. They did that. They only scored two touchdowns in the second half. … If you give that effort each and every game, you will be successful.” 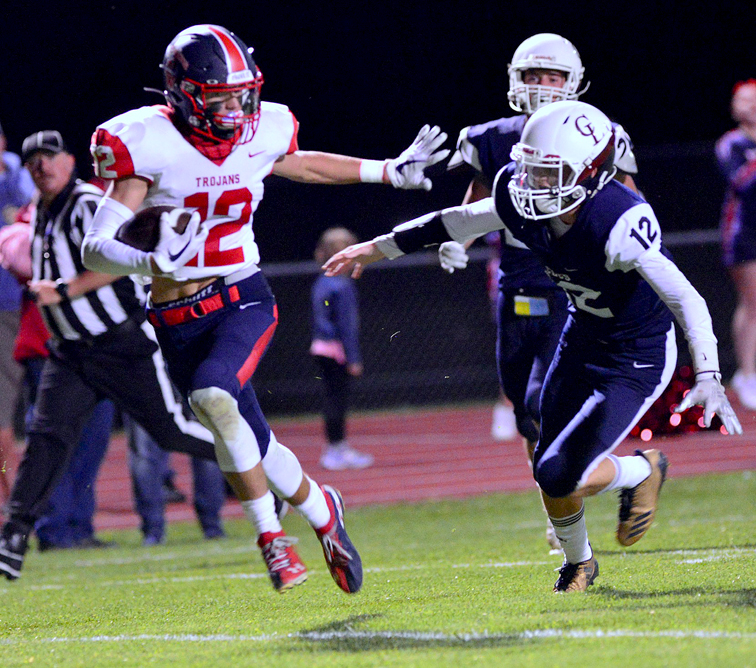 Dom Certo, above, leads the Trojans with 10 receptions for 324 yards and five touchdowns. P-J photo by Scott Reagle

The Trojans quickly took control on their first drive after recovering a fumble to end the Thunderbirds’ opening possession of the game. Sophomore quarterback Aidan Kennedy, starting his first game following the graduation of Cole Snyder, marched his team 39 yards in five plays. After hitting on completions to Munir and Garrett Swan, Kennedy scrambled 11 yards to make it first-and-10 from the 21-yard line. Two plays later, Kennedy found senior Dom Certo in the back corner of the end zone to make it 7-0.

“He made some great reads. He made great decisions,” Caulcrick said of Kennedy. “You couldn’t ask for a better first game for him.”

Two drives after Thomas’ defensive score, Southwestern struck again with a six-play 66-yard drive that included runs of 24 and 18 yards by Kennedy as well as a 16-yard completion to Munir. On second-and-goal from the 8-yard line Tywon Wright, another transfer from Dunkirk, powered into the end zone to make it 21-0.

“It was brief. We were moving the ball and that was a momentum swing,” Bongiovanni said about Thomas’ 70-yard score. “The guys really picked themselves up and they kept going at it. Those things are going to happen. There are going to be ups and downs.”

Following a Thunderbirds’ punt, the Trojans needed less than two minutes to extend their lead again as Kennedy hit Swan with a 40-yard touchdown pass to make it 28-0 at halftime. 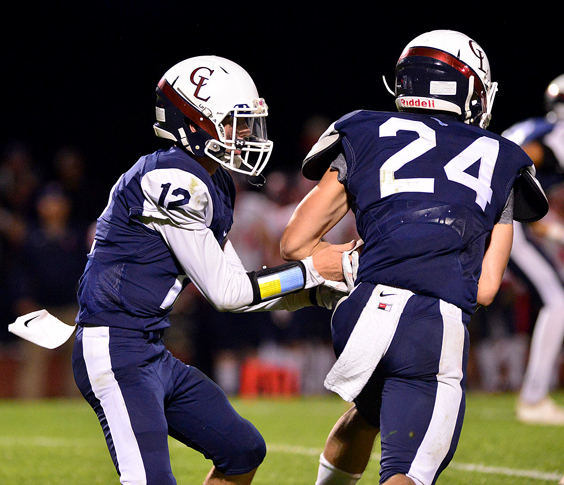 Southwestern needed just two plays — aided by a pair of 15-yard penalties — to score in the third quarter as Kennedy hit Certo for a 33-yard touchdown that made it 34-0 just 23 seconds into the second half.

“Dom played well. That is something that we knew he is capable of,” Caulcrick said of Certo. ” … It’s a matter of just doing it every time. He came out ready to play today.”

By that point, it was clear Chautauqua Lake/Westfield/Brocton would have no answers on either side of the ball as Jafarjian became the Thunderbirds’ only real option on offense. The senior finished with 83 yards on 32 carries.

“Ryan is a workhorse back. He did everything we asked of him,” Bongiovanni said. “He did not give up, he kept his legs churning and he kept pounding the rock.”

On Friday, Southwestern will travel to Portville — another impressive winner Saturday — while Chautauqua Lake/Westfield/Brocton will visit Gowanda/Pine Valley.

“The goal is to win every game. We just want to go day-to-day in practice,” Bongiovanni said. ” … We’ll focus on the tape this weekend for Gowanda/Pine Valley. We’re looking forward to that matchup and I think we’re going to be successful.”

NOTES: Jafarjian, who led the Thunderbirds with nine tackles, and Kennedy were named the Intense Milk/Cross Training Athletics Character Athletes of the Game for their respective teams. … Cooper Pannes and Wright each chipped in eight tackles for the Trojans. … Kennedy went 8 of 11 for 139 yards and three touchdowns through the air while also leading the Trojans on the ground with four carries for 58 yards. … Southwestern picked up 138 yards on the ground and 150 through the air.