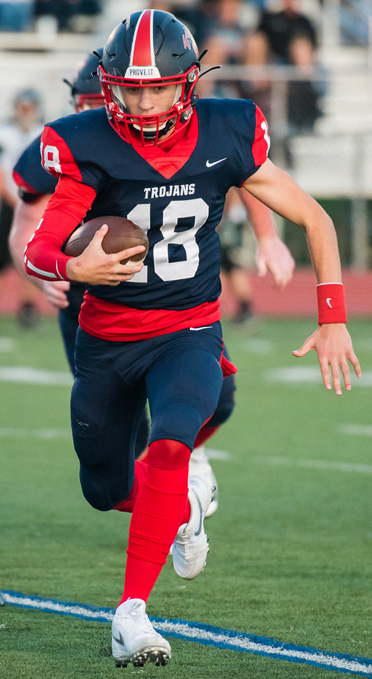 In the third quarter, Southwestern upped its lead to 35-0 in touchdown scampers by Munir and Wright.

Wright capped his night with an 80-yard touchdown run in the fourth quarter before Austin Rott made it 49-0.

The Gators (1-2, 1-1) then became the first team all season to score on the Trojans’ defense when Chad Carlson caught a 13-yard pass from Thomas Callen.

Dom Certo led Southwestern’s defense with a pair of interceptions while Nate Johnson also had an interception and Vance Alvarez had a fumble recovery. Seth Bennett had eight tackles while Cooper Pannes and Thomas each had six.

SALAMANCA — Despite being outgained 209-145, Salamanca was the recipient of four Gowanda/Pine Valley turnovers and turned two into touchdowns en route to a 28-6 nonleague victory at Veterans Park.

After the Warriors recovered a fumble in the first quarter, Isaac Brown capped a scoring drive with an 11-yard touchdown run that made it 7-0 after Aly Hill’s first of four successful point-after kicks.

Salamanca (2-1, 1-1 Class D) made it 14-0 later in the first quarter as Jarrett McKenna returned an interception 35 yards for a score.

Gowanda/Pine Valley (0-3, 0-2 Class C South) got its only points in the second quarter as Chelton Bellinger scored on a 19-yard touchdown run.

The score remained 14-6 until the fourth quarter when Lucas McKenna scored on touchdowns runs of 1 and 9 yards for the Warriors.

Lucas McKenna led Salamanca with 70 yards passing and Brown was the Warriors’ leading rusher with 69 yards. Austin Maybee intercepted a pass in the third quarter.

Gavin Phillips rushed for 69 yards for the Panthers.

RANDOLPH — Olean led 19-0 by the end of the third quarter and beat Randolph 19-8 in nonleague action.

The Cardinals (1-2, 1-1 Class D) stayed close to the Huskies (1-2, 0-0 Class B3) in terms of total yardage, but turned the ball over three times including a pair of interceptions.

Olean went up 6-0 at the 9:03 mark of the first quarter on a Railey Silvis 40-yard touchdown pass to Gavin Kulp. The same pair hooked up for an 18-yard touchdown at the 8:58 mark of the second quarter as the Huskies took a 12-0 lead into halftime.

After the break, Nick Pantuso scored on a 12-yard touchdown run with 42.8 seconds left in the third quarter.

Ty Hind got Randolph on the board with 7:37 left in the fourth quarter on a 9-yard touchdown run.

Isaac Hind led the Cardinals with 83 yards on the ground.

The score remained 6-0 until the third quarter when Burroughs gave Cattaraugus-Little Valley a 12-0 lead with a 1-yard run.

Perry’s Cameron Petrie then caught a 40-yard touchdown pass from Justice Fanaro, but Burroughs answered with an 11-yard touchdown run for the Timberwolves to make it 20-6 after Hunter Furl’s 2-point conversion run.

In the fourth quarter, the Yellow Jackets’ Chalis Farmer caught a 60-yard touchdown pass from Fanaro, but Furl answered with a 23-yard touchdown run for Cattaraugus-Little Valley.