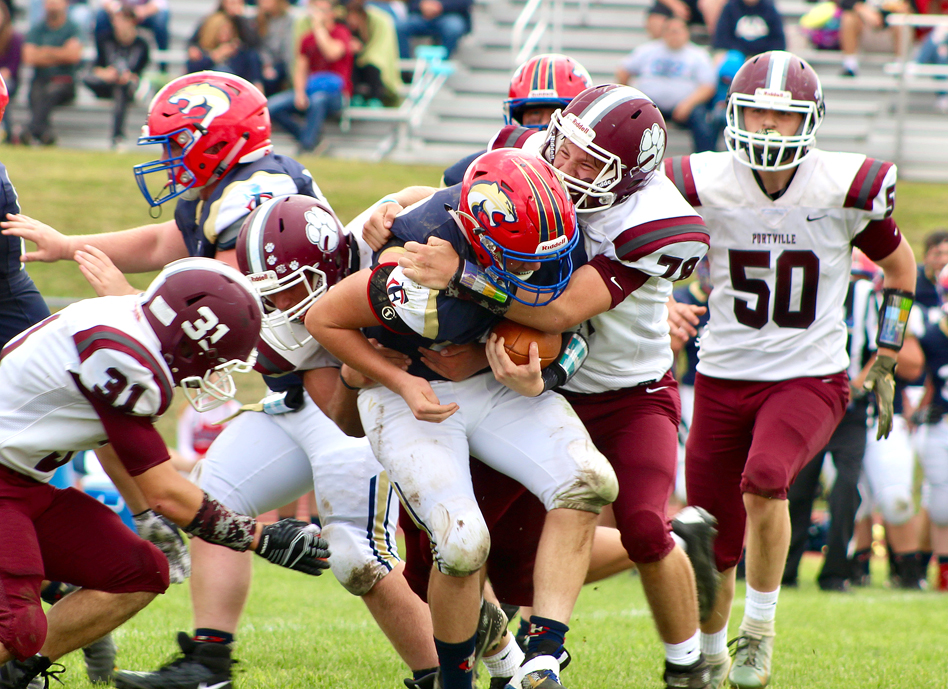 Sometimes circumstances like that can be proven wrong, which leads to the old saying “on any given day.”

Saturday was not that day for the Golden Cougars.

“We got our (butt) kicked,” Cassadaga Valley/Falconer head coach Joel Sopak said. “There’s no other way to put it. We thought we were prepared, but obviously they were more prepared than we were.”

From the first play of the game, Portville (1-0) was off to the races. Set up at their own 40-yard line after a penalty on the kickoff, Panthers running back Jayden Lassiter took a carry and gashed the Golden Cougars defense for a 60-yard touchdown run.

“Right from that first play on,” Sopak said, “it was trouble.”

Lassiter and the rest of the Panthers were just getting started. On the ensuing kickoff, the Golden Cougars nearly lost an onside kick, but were able to avoid the turnover. However, three plays later, the Golden Cougars turned the ball over on a fumble anyway.

Shortly after the fumble, Lassiter powered through the Golden Cougars defense once again, with multiple broken tackles on the way for a 54-yard touchdown run. With 9:38 left in the first quarter, Portville led 14-0.

“Obviously it was very exciting to watch,” Portville head coach Josh Brooks said. “We were hoping to get out to a fast start, but I don’t think any of us were expecting how we did start.”

Cassadaga Valley/Falconer (0-1) committed another turnover on the first play of the next drive, on a pitch play at their own 25-yard line. Shortly after, Lassiter broke through the defense again for an 11-yard touchdown run, his third rushing touchdown of the first quarter. The score was 21-0, less than four minutes into the game.

The Golden Cougars went three-and-out on the next drive and punted the ball back to Portville. Just past the halfway point of the first quarter, Lassiter caught a screen pass and took off down the Portville sideline. With defenders all around him, rather than stepping out of bounds, Lassiter cut back and headed upfield. After making multiple tacklers miss, Lassiter found the end zone for a 65-yard catch and run, his fourth touchdown of the first quarter and his third play of over 50 yards.

“Jayden (Lassiter) is a kid that puts a lot of work in during the offseason. He doesn’t just show up in August and become our starting running back and linebacker,” Brooks said. “He works his tail off. He had a great year last year and took that momentum into the offseason.”

Cassadaga Valley/Falconer followed with a 10-yard punt and Portville was set up in great field position again. It appeared as if the Golden Cougars defense was near its first stop of the game, but on fourth-and-10, Portville quarterback Mike Stillman found Dalton Tobola down the sideline for a 35-yard score, the fifth touchdown of the first quarter for Portville.

Despite a long kickoff return, Cassadaga Valley/Falconer’s ensuing drive stalled on fourth down from the Portville 14-yard line.

The Panthers scored on their next drive, as Tobola reached the end zone from 15 yards out for his second touchdown of the half. The score was 41-0 after a botched snap on the extra point. Portville scored a touchdown on its first six drives of the game, with the only stop of the first half by the Golden Cougars coming on a missed field goal attempt by Portville with just under two minutes left.

“It’s a credit to both our kids and our assistant coaches,” Brooks said. “It’s not magic that this happened. It’s a lot of hard work. We’ve had kids putting in work all offseason and they’re starting to see results.”

Neither team scored in the second half, with the best opportunity coming for the Golden Cougars after another long kick return in the third quarter. Cassadaga Valley/Falconer turned the ball over on downs for the second time of the game in the red zone later on the drive.

The fourth quarter featured five drives combined, including two three-and-outs, two turnovers on downs and a kneel down to end the contest.

“We wanted to be classy about it. … That was pretty much by design. We wanted to get some of our younger kids in. Some of the kids that played today thought they were never going to see the field,” Brooks said. “It’s a great thing to see for our culture. Our starters were rooting everyone on. It’s a lot of fun.”

Lassiter finished with four touchdowns, three on the ground and one receiving. Stillman had three touchdown passes for Portville, two of which went to Tobola.

Next week, Cassadaga Valley/Falconer hopes to get back on track, as the Golden Cougars host Section V’s Red Jacket on Saturday afternoon at 2 p.m.

“We’re going to come back on Monday and hopefully make some changes and regroup,” Sopak said. “We’ve got a talented team still. We’re just young and I think that hurt us today.”

“We’ve got a heck of a team next week at home, Southwestern,” Brooks said. “They’re well-coached with a lot of talent there, but we’re going to get to work. We’ll give them our best shot.”