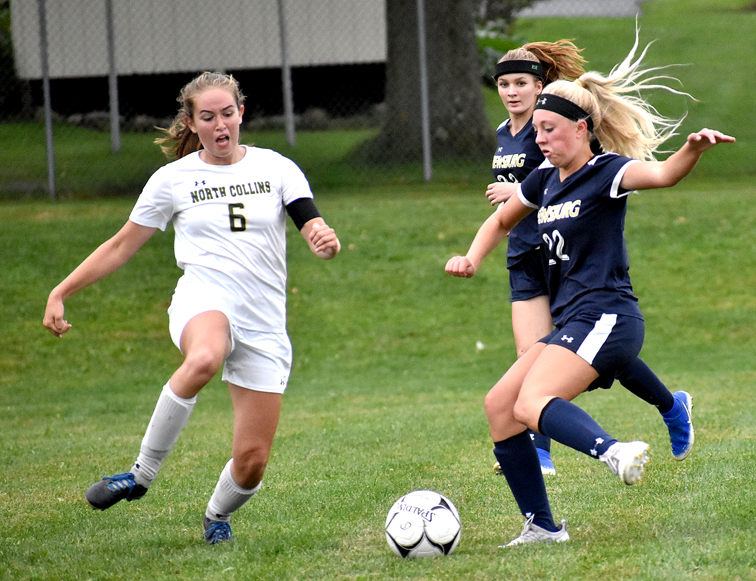 FREWSBURG — In the past, teams were able to focus on one or two players to shut down Frewsburg’s offense.

Through three games, the Bears are spreading the ball around.

Sophomores Rachael Kerhli and Makenna McBride became the third and fourth different players to score a goal for Frewsburg on Thursday evening in a 2-0 Chautauqua-Cattaraugus Athletic Association Central Division victory over North Collins.

“This is a different team than in years past. We are 17 or 18 deep. We have girls that can play,” Stone said. “Last year, a lot of these younger players were asked to play 60, 70 or 80 minutes. That’s not the case this year. … Those minutes are being spread around … and we are a better team for it.” 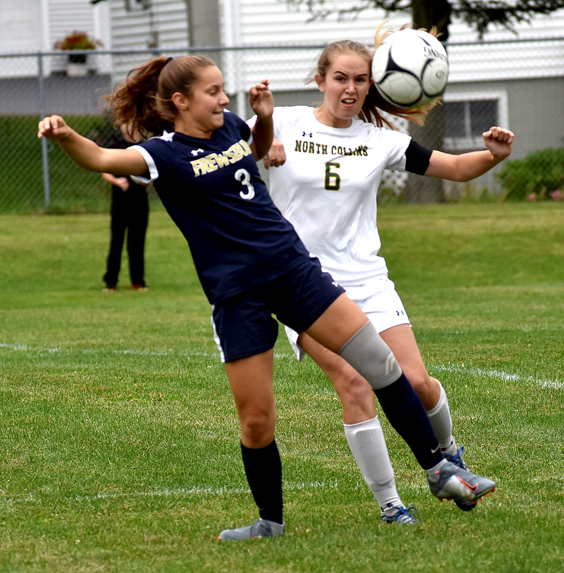 The win helped the Bears (2-1-0, 1-0-0) get off on the right foot in what figures to be an ultra-competitive Central Division that includes Maple Grove, Silver Creek and Westfield/Brocton among others.

North Collins (1-2-0, 0-1-0), which hadn’t played since its second game of the year Aug. 29, hung with the Bears for the opening half Thursday and kept them off the scoreboard, but was unable to mount much of an attack of its own.

“There were a lot of positives. We’ve had some turnover from the last couple of years,” North Collins head coach Vince Fininzio said. “We haven’t played in two weeks. We played two games and then sat for two weeks so we’re getting back into game shape and game speed.”

Frewsburg controlled play for the opening 40 minutes, but was unable to break through.

“I don’t feel like it was a slow start. That’s the way we wanted to play. We wanted to gauge them. It’s a long game. We just wanted to take our time and figure out what we had,” Stone said. ” … We weren’t trying to press early. … We just wanted to stay aggressive. There was no panic.”

It appeared the Bears may get on the board early in the second half when the Eagles were called for a handball inside the 6-yard box, but North Collins senior keeper Myah Gabel made one of her eight saves on Frewsburg freshman Alex Hultberg to keep the game scoreless.

“I thought that was going to kind of turn the tide and give us an extra boost,” Fininzio said of the save.

The Eagles used the momentum boost for a few minutes, resulting in their only shot on goal of the game, but Bears junior keeper Madison Voty turned the shot aside.

“We had a couple of good opportunities,” Fininzio added. “When you get two or three, you have to put one in the net.”

Shortly after, Frewsburg took the lead.

In the 62nd minute, Alex Hultberg took a hard shot that hit the crossbar and came straight down on the goal line behind Gabel. In a race for the ball, McBride got her left foot on it just before Gabel could secure it and the Bears had a 1-0 lead.

Sophomore Sam Annis nearly created the goal on her own as she beat three North Collins defenders inside the 18-yard box. She then sent a ball through the box to Kerhli, who finished with her left foot to make it 2-0.

“They’ve been working hard for the last couple of years,” Stone said of Kerhli and McBride. “For them to go out there and get a goal I think boosts their confidence even more.”

The Eagles were never able to really mount a comeback, largely due to Frewsburg’s possession of the ball. Even when North Collins did advance into the Bears’ end, a returning defensive core that includes seniors Rachel Annis and Amanda Dilts, sophomores Peyton Yost and Reagan Chitester, and freshman Jacey Cappa, was able to turn the Eagles away.

“Credit to our back four. We have a solid back four, we rarely sub,” Stone said. ” … We work hard on our defense, we pride ourselves on our defense. Today was just another example of that. They played great and didn’t give up a lot of chances throughout the whole game.”

“We’re trying to play a little different formation to control the middle of the field a little bit more with an extra midfielder,” Fininzio said. “It’s basically our third game trying to learn that. … It’ll come eventually.”

In their first two games — a 2-0 win over Fredonia and a 2-0 loss to Southwestern — the Bears received goals from freshman Ashlyn Samuelson and junior Ava Hultberg.