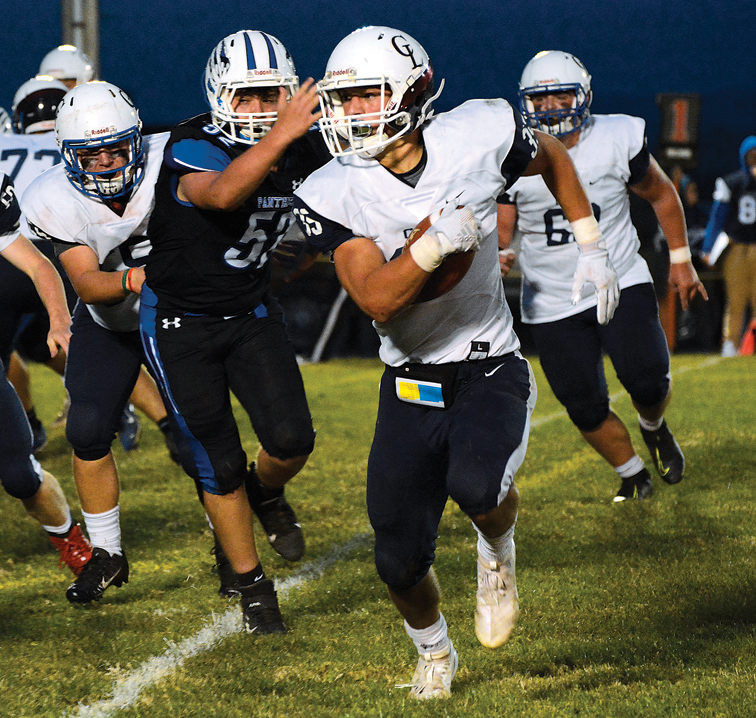 SOUTH DAYTON — On Friday night, the Gowanda/Pine Valley Panthers (0-2) battled both the Chautauqua Lake/Westfield/Brocton Thunderbirds (1-1) and the wind on their home turf in Pine Valley.

The Panthers found out that the Thunderbirds soar in the wind, as they flew to a 37-6 Section VI Class C South victory.

In the first quarter, both sides struggled against the wind, as they had a tough time controlling the ball. On each team’s first drive ball security was proven to be an issue, seeing uncharacteristic fumbles and botched snaps.

“I think both teams came out a little bit nervous,” Chautauqua Lake/Westfield/Brocton head coach Bryan Bongiovanni said. “The wind is pretty tough out here, ball security was kind of at a premium. We knew it was going to be tough.”

It was Gowanda/Pine Valley who first found success, as it worked its way into the red zone late in the first quarter. Just as the first quarter ended, the Panthers found themselves fourth-and-goal on the Thunderbirds’ 1-yard line. Instead of electing to kick the field goal in the horrendous wind conditions, Panthers running back Gavin Phillips punched in his first varsity touchdown, giving Gowanda/Pine Valley their first lead and points of the year, 6-0.

With a touchdown being scored to start the second quarter, it was a sign of things to come. The Thunderbirds offense responded immediately to the touchdown drive with a strong offensive effort themselves. Ryan Jafarjian led the drive from the backfield with two big drives, including a 21-yard touchdown run to even the game at 6-6, also giving the Thunderbirds offense their first points of the season.

Just as the Thunderbirds offense began to pick it up, their defense followed suit by putting a stop to any offensive momentum by the Panthers. Chautauqua Lake/Westfield/Brocton got the ball again with great field position from a poor punt into the wind. In the blink of an eye, Jafarjian was back in the end zone again for his second touchdown of the game, giving his team a 12-6 lead.

Jafarjian did not stop there as the Thunderbirds offense was granted another prime opportunity as the Panthers offense continued to struggle going into the wind. Halfway through the second quarter, Jafarjian found himself in the end zone again for his third touchdown of the game.

“Jafarjian’s our leader,” Bongiovanni said. “He’s just a workhorse back. He’s a guy that every play he’s going to give you everything he has. But you know he needs blocks in front of him to be able to get room to run, so it comes back to every man doing their job out there. Ryan did a great job and he was able to benefit from his teammates.”

Leading 18-6, Chautauqua Lake/Westfield/Brocton was sitting pretty, still running with the wind and its opponents running into it. After shutting down the Panthers offense again, another short punt gave the Thunderbirds a prime opportunity to score before halftime.

Early in the drive, it was obvious the Thunderbirds were going to give the passing game a look because of time concerns. The decision almost turned critical when a Gowanda/Pine Valley defensive back got his hands on a Zach Martin passing attempt, but that did not concern the Thunderbirds coaching staff as they stuck with it. A couple of plays later, it was fourth down, and the Thunderbirds decided to go for it. Martin soon connected on a pass, finding Caleb Chelton in the middle of the field for a touchdown, giving them the 24-6 lead headed into halftime.

“We were pounding the rock a lot,” Bongiovanni said. “Then we saw some options to take some shots through the air. Our line gave Zach Martin a lot of time. He was able to deliver some accurate passes, our receivers were able to break some tackles and get into open field, and we just kind of took advantage of the situation.”

In the third quarter, Chautauqua Lake/Westfield/Brocton picked up right where it left off with the offense rolling on all cylinders. After going to Jafarjian on the first few plays, the Thunderbirds went back to the passing game and immediately found success — Martin connected with Chase Baker for a 55-yard touchdown reception and 30-6 lead.

“It was an all-around team effort,” Bongiovanni said. “Just right from the get-go we came ready to play. Everybody did something positive on the field today.”

Despite another Jafarjian touchdown run to get the Thunderbirds up 37-6, the Panthers rallied behind their loud home crowd who had not seen a home game in years.

“It’s a beautiful place and there is a lot history here,” Gowanda/Pine Valley head coach Sean Gabel said. “I wish we could have given them better result, because we are very grateful for them.”

The 37-6 victory was Bongiovanni’s first victory at the helm.

“They hit us harder than we hit them,” Gabel said. “We didn’t quit, we finished. But we’ve got to compete — we got to play better. Tonight we just did not come out and hit.”