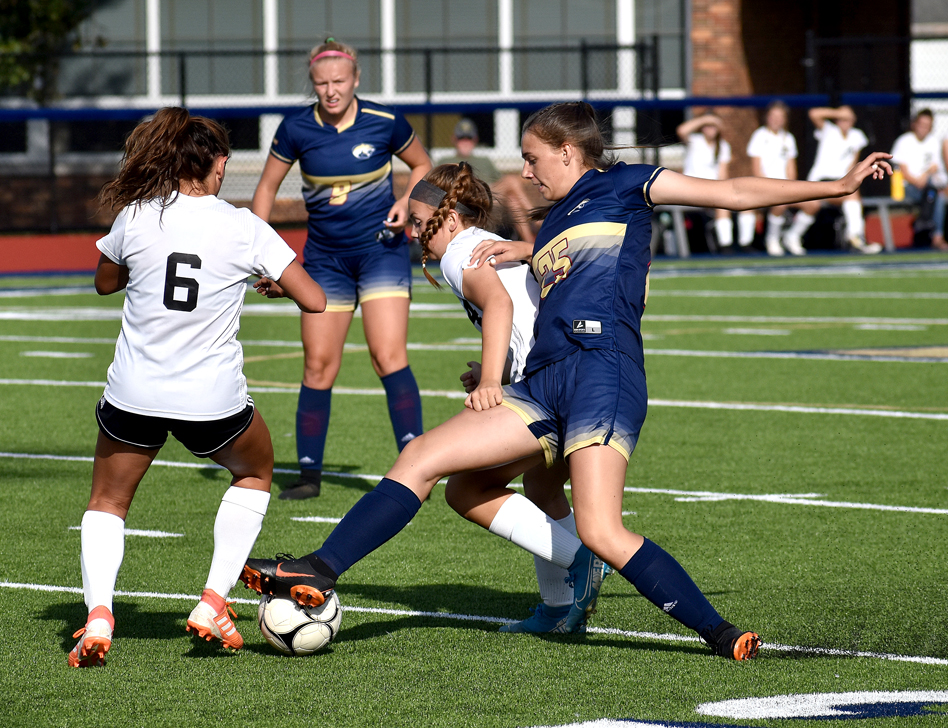 Thursday was no different.

Allegany-Limestone improved to 5-1-0 overall and 2-0-0 in the league, outscoring Dunkirk and the Golden Cougars by a combined 17-0 in its two West Division games.

The Gators got on the board in the third minute as Sofia Fortuna left a short drop pass in the 18-yard box to Abbey Gardiner, who beat Falconer/Cassadaga Valley goalkeeper Grace Lundmark to her right for her fifth goal of the season. 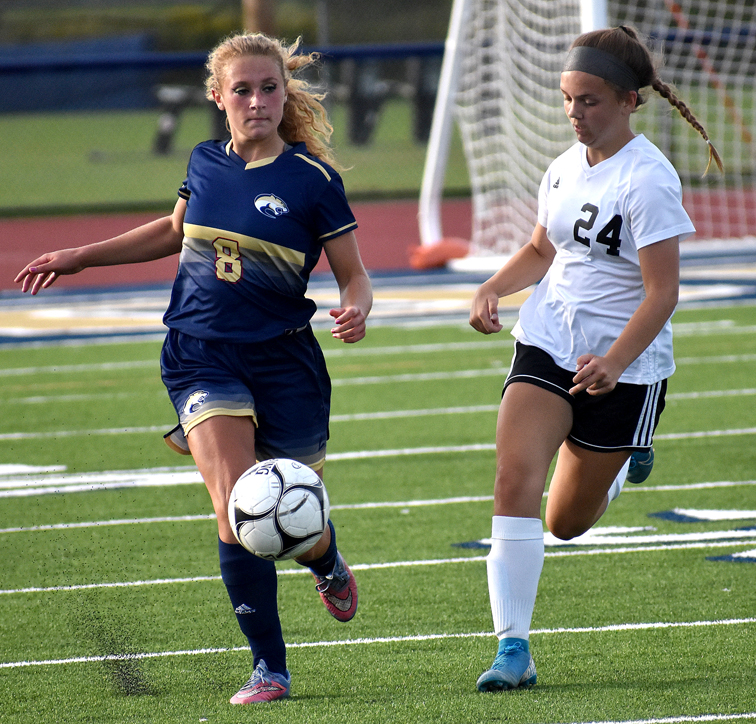 “Two times, what we worked on Wednesday night was used tonight,” MacArthur said. “Well, we used it a lot of times, but we were successful twice. That’s a good thing.”

The early onslaught came to an end just over two minutes after that as Gardiner was the recipient of a nice left-footed pass by Grace DeCapua point blank in the middle of the 6-yard box and put home her second of the day for a 3-0 Gators’ advantage.

“We didn’t start the game with the energy and potential that we know we have,” Falconer/Cassadaga Valley head coach Brett Johnson said. “When you get three goals put on you in 15 minutes, it’s a tough one mentally.”

The Golden Cougars (5-2-1, 1-1-0) held their own through the middle 40 to 50 minutes of the game, but with such a defensive mindset attempting to limit the Allegany-Limestone chances, most of their rushes were in the form of just one or two girls. 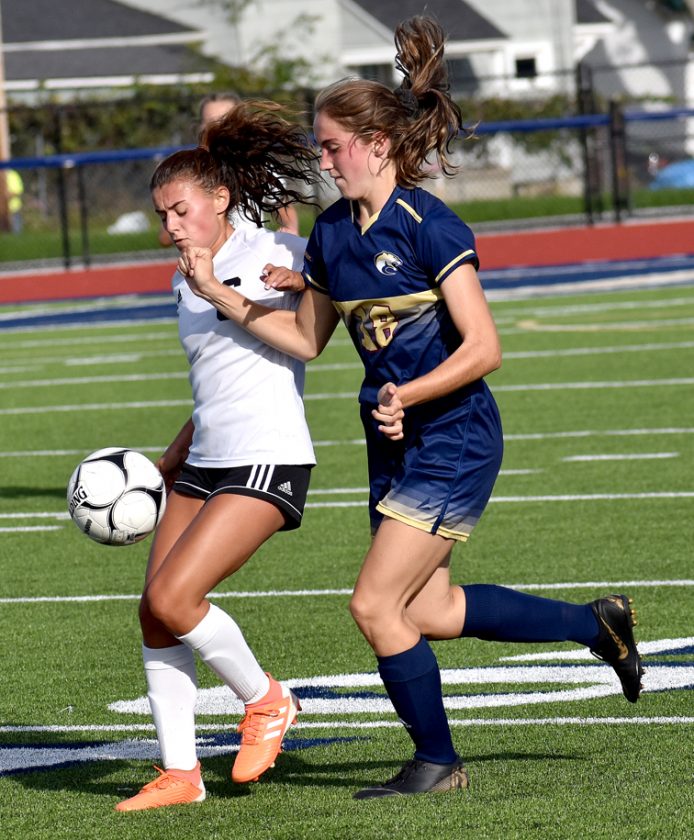 “Against such a talented team like Allegany-Limestone, when the ball is in your half most of the time, and then you get one counter-attack with two people up,” Johnson said, “it’s just a numbers game at that point and it’s not in your favor when you only have two people.”

Several times Izzy Penhollow was able to break down the right wing of the field, only to see her shots gobbled up by Gators goalkeepers Tierney Hemphill or Kesley Riordan, who combined for 11 saves in the shutout.

“I wasn’t all that comfortable at 3-0. The Penhollows are pretty dangerous players,” MacArthur said. “It only takes somebody to bounce one off their ear, and then they’re on a roll and you are fighting for your life. I felt we needed one more.”

Allegany-Limestone’s transition game gave Falconer/Cassadaga Valley fits throughout the afternoon, and it was never more evident than during the 19th minute of the second half. After breaking out of their own end of the field, the Gators eventually advanced the ball to Spring, who worked a perfect give-and-go with Kaitlyn Higby, before burying her second goal of the game and 12th of the season.

“You get back on defense and the other team gets pushed forward. The faster you can get up there, the more you are going to find numbers in your favor,” MacArthur said. ” … We try to spread people about a little bit, and we’re able to play a little bit more freely.” 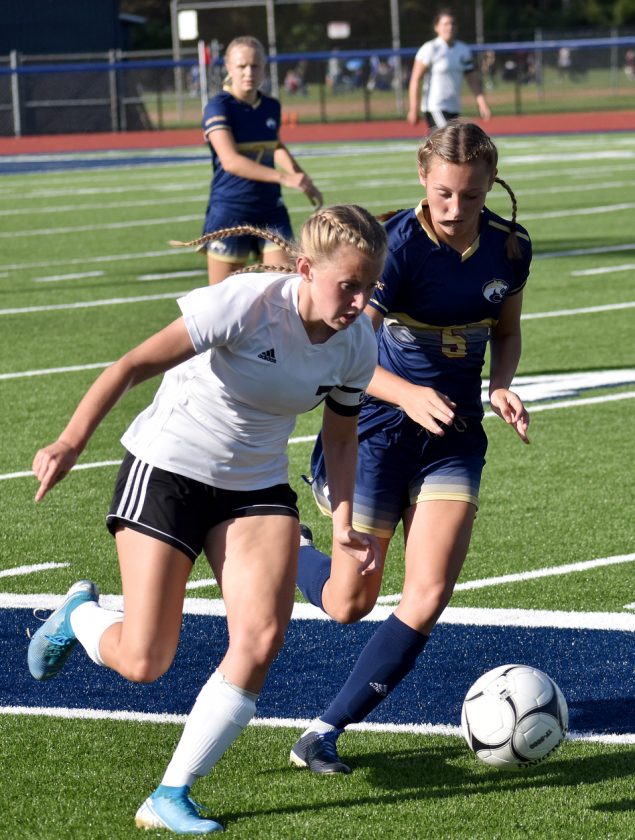 Spring returned the favor to Higby just over a minute later, dropping a ball out of the 18-yard box to the senior midfielder, who struck a well-placed ball into the top of the Golden Cougars’ net from around 30 yards out for her third goal of the season and a 5-0 lead.

“If you’re one dimensional you are easy to stop. We work very hard to try and get other people to score so that teams can’t focus on just one,” MacArthur said. “For a couple of years, we’ve been fairly successful at that.”

Falconer/Cassadaga Valley nearly broke up the shutout down the stretch, but Riordan made a point-black stop on a scramble in the box during the final 20 minutes, and Penhollow later rang a shot off the goal post.

“They are the best team that we see in the regular season, by far. They just know what they are doing and they are well coached,” Johnson said. “We played right with them (at times). … We talked about the positives you can take away from that.”

NOTES: Lundmark made 13 saves on 20 Allegany-Limestone shots while Falconer/Cassadaga Valley had five corner kicks. … The Gators had three corner kicks in the game.