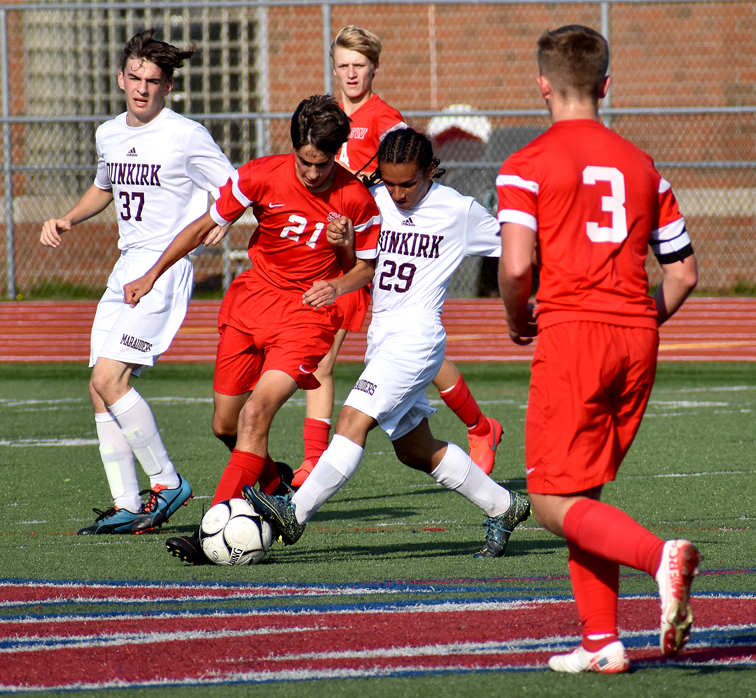 RANDOLPH — Allegany-Limestone topped Randolph 3-0 in a game between teams that could battle for the Chautauqua-Cattaraugus Athletic Association East Division crown.

After halftime, Noah Paterniti scored from Bryant Talbot in the 52nd minute before Connor Bates scored from Tyler Curran in the 62nd minute.

“It was a pretty evenly matched game in the first half,” Randolph coach Dave Levandowski said. “We came out and I felt like we had better control in the second half. We were bitten by bad luck. We had some bad bounces on each of their three goals.”

Mason Kwiatkowski made seven saves for Allegany-Limestone while Cameron Finch made five saves for the Cardinals (2-3-0, 0-1-0). 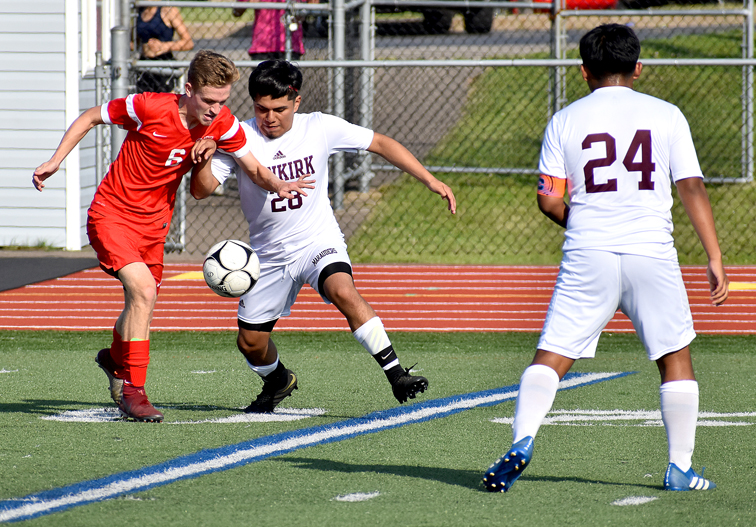 “We’ve had some bad games early on, but today we played well enough to win,” Levandowski said. “We just got zero breaks.”

T’BIRDS BATTLE TO A TIE

MAYVILLE — A second-half goal from each team ended in a 1-1 tie between Chautauqua Lake and Fredonia in West Division action.

Adam Sellari scored from Juan Matias in the second minute of the second half for the Hillbillies before Hunter Harris answered on a penalty kick for the Thunderbirds.

Erik Peterson made 17 saves in net for Chautauqua Lake while Tyler Rosen turned aside 11 shots for Fredonia.

Darwin Westlund tallied from Evan Frontuto at 12 minutes of the first half before Wayne Libby set up Frontuto for the second goal at 17 minutes.

FREWSBURG — Caleb Foley scored a pair of goals from Nick Golando to lead Maple Grove to a 4-0 win over Frewsburg in Central Division action.

The Foley-Golando combination opened the scoring in the third minute of the first half before Sam Eimiller followed with a goal from Kevin Ruhlman in the 31st minute.

After halftime, Foley and Golando made it 3-0 in the fourth minute before Golando scored from R.J. Helt in the 20th minute.

Bryce Butler grabbed a pair of assists in the win while Jamison Caldwell made five saves.

Jared Dorman had a single tally while Noah Richner and Austin Johns each had assists for the Golden Cougars (2-2-0, 1-0-0).

Quintin Allen and Maxwell Bee took care of the scoring for Olean (1-5-0, 0-1-0) while Stephen Hoffman grabbed an assist.