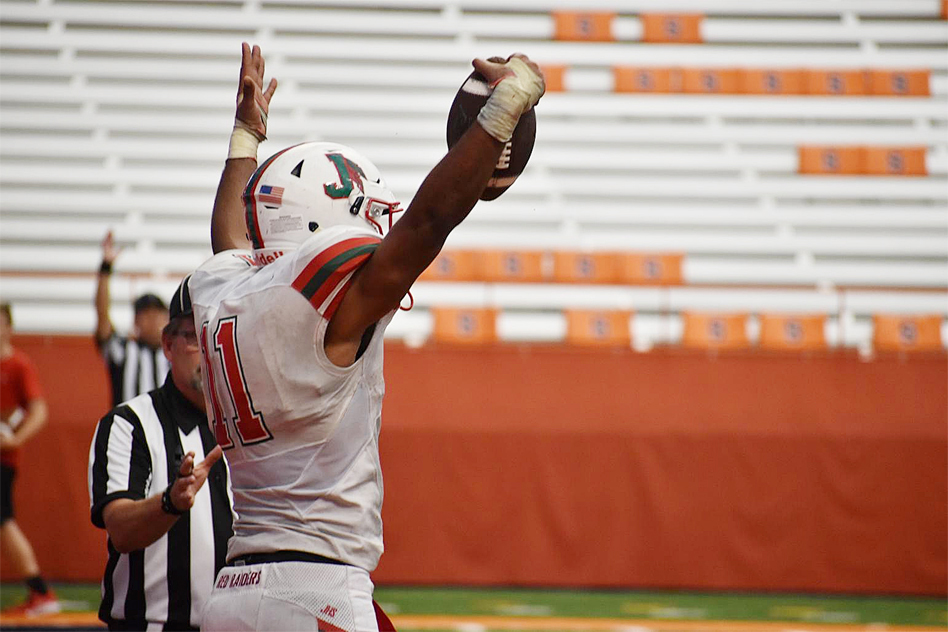 Moments before the start of practice Thursday afternoon, Jamestown’s Savon VanSickle laid on his back on the turf at Strider Field and was stretched out by team trainer Kari Newman. Judging from his performance in the Red Raiders’ season opener, however, the junior running back/defensive end appears to be in fine shape.

All VanSickle did in Jamestown’s 28-21 overtime victory over Section III Baldwinsville last Saturday at the Carrier Dome was rush for 177 yards on 31 carries and a pair of touchdowns, while recording four tackles, including a critical stop in OT, that helped secure the win. His efforts earned him Most Valuable Player honors.

“Being at Syracuse to open our season, that in itself was an experience,” VanSickle added. “I went out there fully healthy. Being out there with my brothers and playing Jamestown football, it felt good.”

Given the emotional and physical roller-coaster ride that VanSickle has experienced the last two years, it’s understandable why he felt especially happy when he boarded the bus for the return trip home. 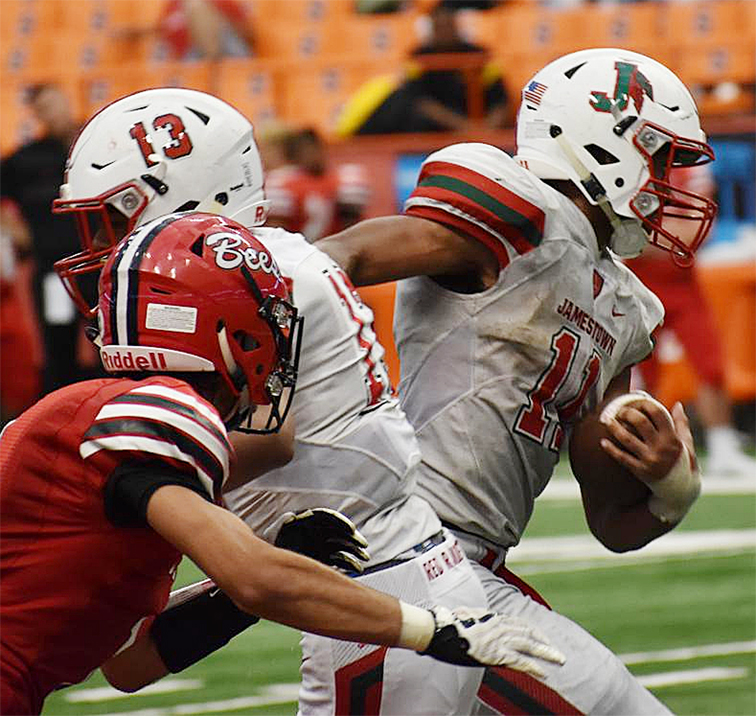 In 2018, VanSickle suffered a knee injury in the first quarter of the first game; he returned to play in three more contests, albeit on a limited basis; and finished the year with 207 yards rushing. In 2017, he ran for 627 yards and nine touchdowns, while catching seven passes for 173 yards and two scores. But those gaudy freshman numbers were overshadowed by an injury to the other knee in a Section VI Class AA quarterfinal double-overtime victory at Clarence, a contest in which he amassed 264 yards and four touchdowns in a little more than three quarters.

“He just took that game over,” Langworthy recalled. “We went into (it) planning to get him 30 carries, and we did. He would have got 40 if he stayed in the game probably.”

Those kinds of numbers never materialized in VanSickle’s injury-shortened sophomore season, but he left little doubt who the best player on Ernie Davis Legends Field was last weekend.

“There was no fear or doubt in my mind that something would happen,” he said. “I was just playing ball.”

Added Langworthy: “I thought he played really well for his first game healthy. He ran hard, he broke tackles, he showed he could run inside and outside, and he returned kicks. … That was a tough environment to play. It was hot (in the Carrier Dome) and he played the whole game with minimal breaks. I was really proud of him.”

For all his success running the ball, the 6-foot-2, 200-pounder may have made the biggest play on defense in the overtime.

“He had a really big tackle on (Baldwinsville’s third-down play) to get it to fourth-and-5,” Langworthy said. “We had (the quarterback) flushed out of the pocket and Savon didn’t stop, he didn’t quit on the play and he made the tackle. That’s probably the big play no one talks about. … That pretty much made (fourth down) a passing situation and we got the stop.”

For VanSickle, his best is yet to come, according to his coach.

“The sky’s the limit for Savon,” Langworthy said. “In addition to his ability, he also has the size. … He’s a junior, he’s still growing, he’s got speed (he was timed at 4.59 in the 40-yard dash at Boston College camp this summer), explosiveness, power, athleticism, and he’s a smart player. He’s got all the tools.

The Red Raiders open their Section VI Class AA portion of their schedule at 7 tonight at Strider Field against Hutch Tech, which lost its first game, 51-6, to Lancaster.

“They’re dangerous, they’re fast,” Langworthy said of the Engineers. “They have a lot of speed and a lot of athleticism. When you lose a league game (like Hutch Tech did), their backs are against the wall, so we need to get a win.”

“I think we’ll do great things,” he said.

NOTES: Jamestown athletic director Ben Drake has announced that the district is no longer charging admission to Red Raiders football games. Any student in eighth grade or below, however, must be accompanied by an adult in order to attend.