Gerry Rodeo Week One Of The Best In Recent Years 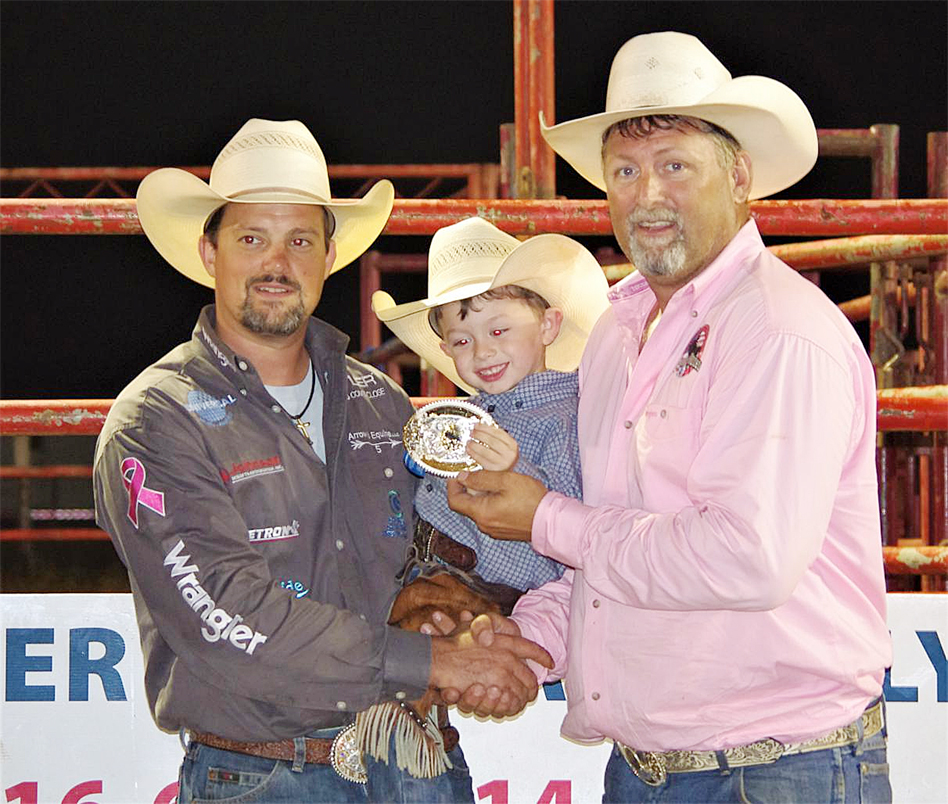 J.R. Myers, left, with his son, Gator, receives the “All-Around Cowboy” award from Gerry Rodeo chairman Tom Atwell for being the only contestant to win money in two events during the week. Photo by Sharon Atwell

GERRY — Perfect weather, some of the world’s best pro cowboys and cowgirls, outstanding rodeo stock, and many dedicated volunteers combined to make the 75th anniversary edition of the Gerry rodeo what rodeo officials are calling “one of the best in recent years.”

This positive result led the members of the fire department to vote unanimously on Saturday to continue bringing rodeo to Gerry for at least the next five years with the 2020 dates set for Aug. 5-8.

More than 8,400 rodeo fans filed through the gates, an increase of nearly 25 percent over last year’s event, with the attendance topping 3,000 on Saturday night. Chef Bruce Gustafson and his kitchen crew served more than 3,400 meals during the four evenings.

The 200-plus competitors, who traveled from 22 states, including Texas and Florida, as well as Quebec, Canada, competed for a record prize purse of more than $67,000. Several of those cowboys were ranked in the top 20 in the world standing, including some who have held or presently hold world titles.

In addition to the rodeo action, fans were treated to the antics and skills of one of rodeo’s all time great performers, Keith Isley, who has been honored by the PRCA as Comedy Act of the Year, Clown of the Year, and Specialty Act of the Year on multiple occasions. His trained horses provided perhaps the best animal act ever in Gerry.

Keeping the fans informed and moving the show along is a special skill, and veteran announcer Greg Simas, who has traveled all over the world as a rodeo announcer, returned for his eighth year to serve as the announcer from his seat on horseback in the arena. The horse he is presently using is one he purchased while he was in Gerry last year.

Rodeo chairman Tom Atwell, now in his 15th year in that position, says none of this would be possible if it were not for the dedication of the approximately 150 volunteers, many of whom take vacation time to fill the necessary responsibilities which vary from serving food to parking to ushering and many more jobs necessary to allow this event to occur each year. He also emphasizes the financial importance of the rodeo as all proceeds enable the fire department to provide fire and emergency services to the area.

Prize money for the rodeo comes from the Gerry Rodeo Committee, the various sponsors, and from the entry fees paid by each contestant.

Following are the top three money winners in each event for the four-day event: