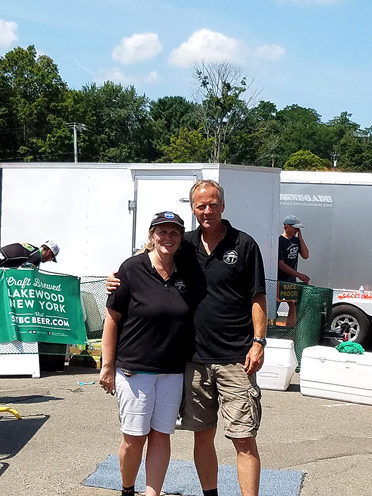 FINDLEY LAKE — Forget about Ironman and Tough Mudder competitions, Findley Lake has its own triathlon.

The small village of Findley Lake hosted its first triathlon last Saturday. Participants could choose to compete in the sprint triathlon, which entails a 750-meter swim, an 11.5-mile bike ride and a 5K run, or the Olympic triathlon, in which all those distances are doubled.

“It’s a beautiful lake and it’s a cute little town,” said Mark Wilson, an accomplished triathlete and coach who, with his wife Tonia, produced the event. “Our events are grassroots, homegrown. We’re not a corporation, it’s just us, and we want out athletes to have a good time.”

Between 70 and 80 triathletes took part in Saturday’s event.

“It’s been great,” Mark Wilson said. “Look at the weather. Everyone was safe. I don’t even think anyone sprained an ankle.” 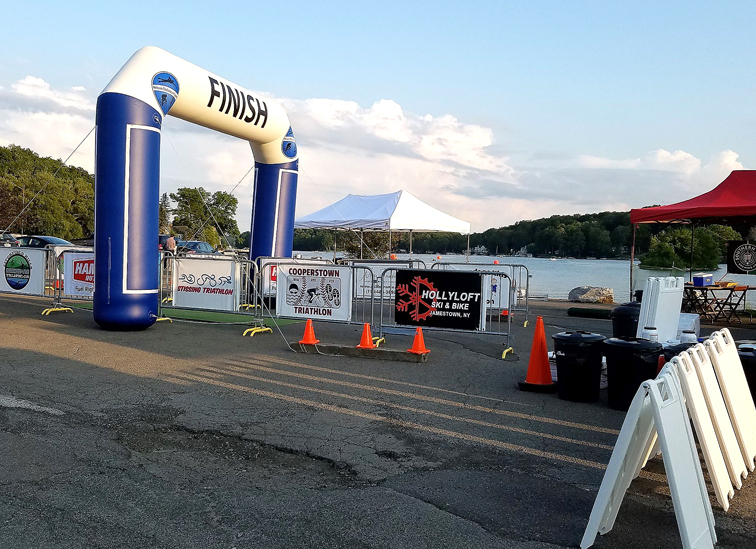 All was ready last Friday evening for the triathlon event in Findley Lake on Saturday.

Both of the Wilsons said they were impressed with the community of Findley Lake.

“The community really stepped up,” Mark Wilson said. “Tons of volunteers came in at the last moment.”

“One business provided a tent. Others provided ice and water — that’s huge,” she said.

In return, the athletes, who came from as far away as Buffalo, Ohio and even from Florida, benefited the community by staying at the local campground, bed and breakfasts or hotels, as well as shopping locally.

“We heard all sorts of comments such as ‘this is a great community.’ So they plan to come back,” Tonia Wilson said.

The Wilsons, who live in Cassadaga, have produced more than 25 athletic events in New York and one in Connecticut, this year alone. Tonia Wilson said they begin working on each event a year before it takes place.

“I do all of the administration work, such as registration,” she said. “A lot of work goes into one of these.”

Tonia Wilson said getting sponsors for the events is the toughest part. However, the rewards outweigh the work.

“The people we have met, it’s such a joy,” she said. “We have such a good time with them.”

Tonia Wilson said that, even though they will never get rich from producing these events, they appreciate having the opportunity to work together.

“I get to work with my husband every single day,” she said.

Mark Wilson said that events such as the triathlon help people keep fit and, consequently, they are happier.

“If you don’t move, you turn into cement,” he said. “I believe that if you move, you feel better, and you’re likely to be a better person, not just for yourself, but for your family and your community.”

Mark Wilson certainly has enough experience to make such a statement. He started running competitively at the age of 12. He has trained thousands of athletes and conducts training camps across the United States. He has been a coach for more than 25 years and is the founder of two triathlon clubs: the Hudson Valley Triathlon Club and the Southern Tier Triathlon Club.

Mark Wilson is also a professional life coach because of his belief that keeping fit helps people live better. His mantra from his website is “participating in the sport of triathlon may cause radiant health and spiritual well-being.”

Mark Wilson, now 52, has tried to live out this belief.

“If you aim for living a better life every day, that tends to happen to you,” he said.

On his website, Mark relates the story of how, after the birth of his two daughters, he was working a second-shift job and putting on weight. He made a promise to himself in 2008 to get back in shape and take part in a triathlon that summer.

“I started competing myself,” he said. “Then I started producing races, and it turned into a career. It’s a great sport. I love it.”

Mark, and his wife, Tonia, grew up in Mayville and produce the races together.

“I love being in sports, I love meeting people from all over the world, and my wife is always with me, so I’m with the one I love all the time,” he said.

Not all of the competitions that the Wilsons produce are triathlons. Some are duathlons, in which competitors, run, bike, then run again. On Sept. 28, in Randolph, the Wilsons are hosting an event in which participants can choose to run 1 mile, 5K, 10K, a half-marathon or a full marathon.

“The largest Old Order Amish Community in the country is right there in Randolph and that’s where we run through,” Mark Wilson said. “It’s just beautiful.”

As for the Findley Lake triathlon, Mark Wilson said he has every intention of making it an annual event.

“Next year we are going to double it,” he said. 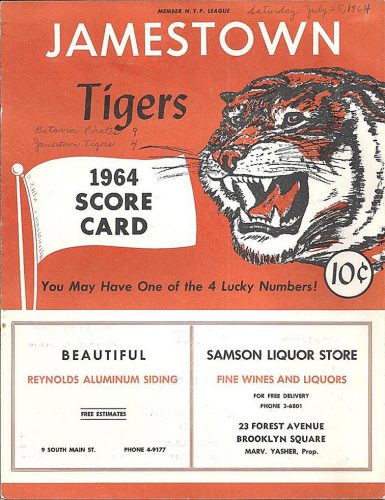