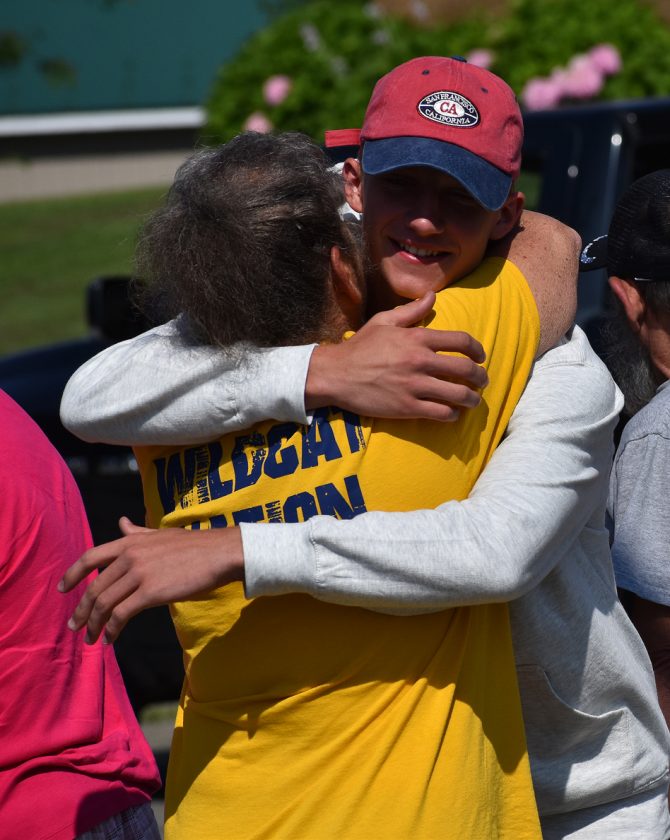 Lined up behind the fire truck were a bunch of cars.

And, once the procession arrived at the parking lot on Park Street opposite Sherman Central School, there were more people waiting to welcome the 16-year-old home in style.

That’s the kind of greeting you get when you capture All-American honors as the silver medal-winning decathlete at the USA Track & Field Hershey National Junior Olympic Championships in Sacramento, California.

“It’s really nice to know that everybody is backing me up, and they all are rooting for me,” said John, the silver medal hanging from his neck. “We’re a small (community), but we can still do big things. Our school motto is, ‘Small school, big impact.'” 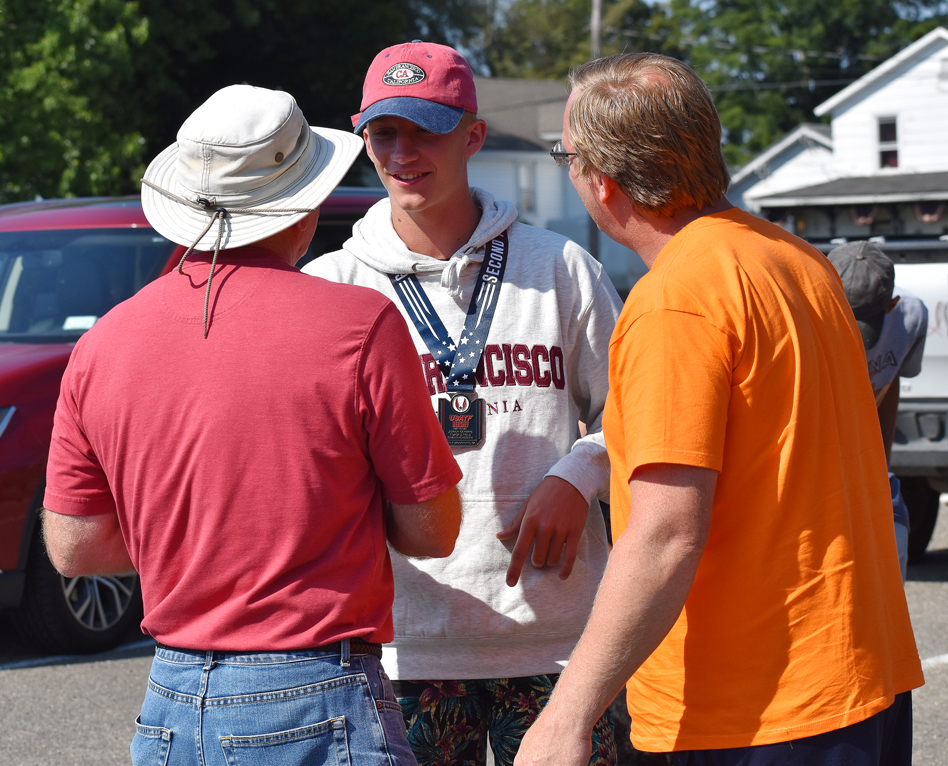 John Swabik, middle, seen wearing the silver medal he won at the USA Track & Field Hershey National Junior Olympic Championships, was greeted by family and friends upon his return to Sherman on Saturday morning. P-J photo by Scott Kindberg

The son of John and Michelle Swabik has made a habit of making a big impact in athletic competition.

Last November, he scored a fourth-quarter touchdown in the New York State Public High School Athletic Association Class D championship football game that propelled Clymer/Sherman/Panama to the title, and this spring he won the NYSPHSAA Division II pentathlon as a member of the CSP track and field team.

If truth be told, her son’s athletic prowess was foreshadowed long ago.

One day 14 years ago, John and his older brother, Dylan, were playing at a neighbor’s property. It was then that 2-year-old John first showed he would likely be in a league of his own athletically.

“Dylan (then 10) was riding his bike and he put a tow-strap to a little power-wheels car (that John was riding in),” Michelle said. “Our neighbors have a half-circle driveway and (Dylan) was going so fast that John had to counter-steer.”

To the Swabiks, who both were race car drivers at the time, counter-steering should have been an acquired skill, but “Little John,” took to it right away.

“Right from the get-go, he had his motor skills,” Michelle said. “He knew what his body could do. He just knew.”

For the record, John — competing for Chautauqua Striders last week — finished with 6,029 points in the Boys 15-16 age group at Sacramento State University’s Hornet Stadium. Jaxon Bair of the TNT Track Club took home the title with 6,103 points after entering Day 2 in a tie with Swabik.

“I’ll definitely take the silver, but I’m definitely going to push hard to get the gold next year,” John said. “Who doesn’t want the gold? Go for it.”

Added Michelle: “Just this year we started talking more about what those opportunities look like. His dad and I have always known since he was little that there would be these possibilities, and we have really been training him in his character, and just growing his foundation in what our beliefs are.”

Then the Swabiks began to address the big picture, with a goal of attempting to land a berth on the U.S. Olympic team in 2024.

“His coaches, and his dad and I, feel like that could be a possibility, if he commits and puts the work in,” Michelle said.

But it’s not the lofty goals or their son’s performance last week in California’s stifling temperatures that made them most proud.

“After the 400 (meters), there was one guy who had a quicker time than (John) out of the 19 (competitors),” Michelle remembered. “After (John’s) heat, he sat in a chair under a tent in a cooling station, and every kid that came in after their heat, he pounded fists, slapped hands, congratulated them and told them good job. I couldn’t be more proud of that moment.”

The Chautauqua Striders haven’t had a national champion since 1995, but John is determined to change that as he looks toward 2020.

“I’d like to attend the Junior Olympics again, but I think I want to go for the gold at New Balance Nationals,” he said.

The New Balance Nationals are scheduled for June 19-21, 2020 in Greensboro, North Carolina.

If John’s performance last week on the West Coast is any indication, it’s clear that he’ll be a favorite for another medal a year from now on the East Coast.

“This has been a pretty amazing track season,” Michelle said. ” … I couldn’t be more proud.”