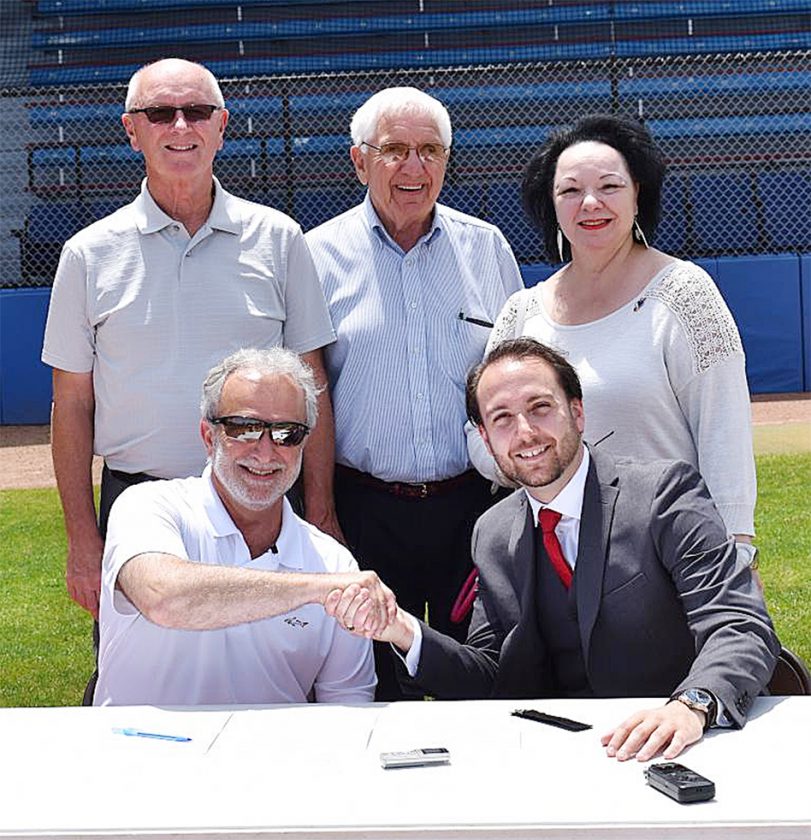 When Frank Fanning was growing up, he never had the opportunity to visit Jamestown, but he knew a little bit about the city anyway.

All he had to do was look at the back of the baseball cards of former Montreal Expos players like Larry Parrish and Delino DeShields, who began their professional careers in Jamestown, to have a long-distance connection.

Or, Frank could just ask his father, Jim, about the town near the shores of Chautauqua Lake.

The former Expos’ general manager and the person responsible for building the former National League team’s talent base, Jim made two or three trips per New York-Penn League season to check on the progress of his minor leaguers.

So it was only fitting then that when Frank, now 29, was introduced as the new general manager of the Jamestown Jammers of the Perfect Game Collegiate Baseball League on Monday afternoon, the contract signing was done at home plate at Diethrick Park. 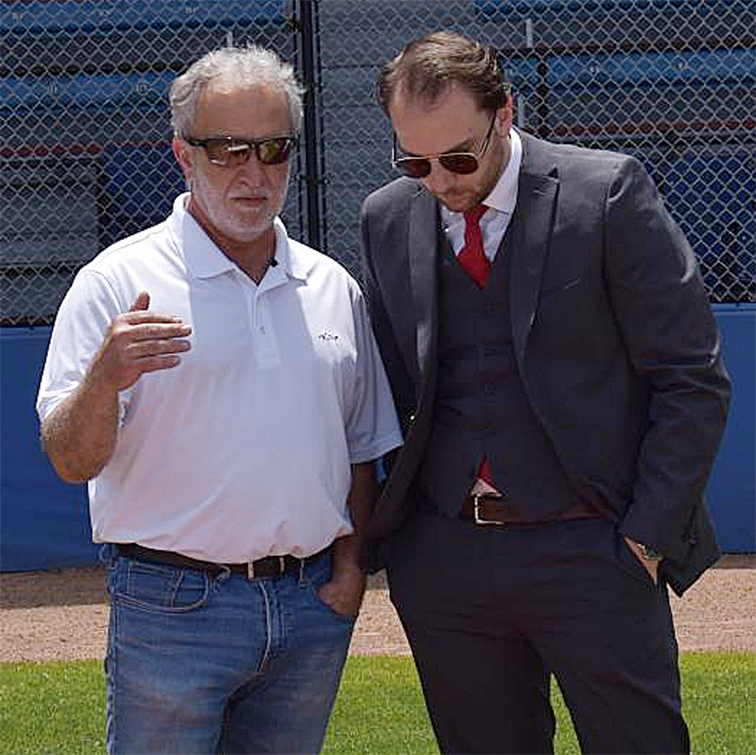 “There’s a lot of roots right here where we are standing,” said Russell E. Diethrick Jr.

On another sun-splashed day at the ballpark on Jamestown’s eastside, Frank Fanning was joined by his mother, Maria; Diethrick, the president of the Jammers’ ownership group, Jamestown Community Baseball LLC; JCB board member Randy Anderson; and George Carlo, chairman of the Secret of Champions Foundation, which is providing the team’s on-field and off-field personnel.

But the man of the hour was Frank.

The Montreal native’s background in the game is extensive, beginning as a catcher in the premier Baseball League of Ontario until he was 18. After a music industry and radio career, Frank spent the 2017 season as the box office manager for the Oakland A’s NY-P League affiliate in Vermont, and became the director of team operations in 2018. Earlier this year, he assisted in sales for the Canadian Baseball Hall of Fame and Museum in St. Mary’s, Canada.

And, now, he can call Jamestown home.

“My education in the game was very good,” Frank said. “I just didn’t have the talent to go very far playing it, but I loved the game, and that’s all that mattered to me.”

It certainly helped that because of his dad’s stature in America’s pastime, Frank was able to be part of some special opportunities growing up.

“One great memory I had was at Olympic Stadium (in Montreal),” Frank said. “I was in the visiting clubhouse. My dad was a special assignment scout for the (Colorado) Rockies in 1996 or 1997. He gook me into the clubhouse and he said to Larry Walker, who he had signed (years before), ‘Just watch Frank.’ I sat at a table with Larry, who was huge; Andres Galarraga, who played (in Jamestown) and was huge; and Dante Bichette, who was wearing a muscle shirt. They’re all playing cards and they were just kind of looking at me, this little kid. … I didn’t know what to say, but it was really cool.”

Carlo believes having Frank in Jamestown is the perfect fit.

“He’s a special person, number one,” Carlo said, “and he comes from a special family, number two. But his knowledge of the game and his knowledge of what has to be done to make the Jamestown Jammers special is at the highest level. We’re so honored to have him now as the general manager.”

The Jammers, who were the champions of the PGCBL League in 2018, will be “dark” this season, but will return in 2020 after an eventful couple months for the new ownership group. Not only has it assumed the lease to Diethrick Park from the previous tenant, Jamestown Baseball LLC, it has also signed an extension of that lease through the 2025 season.

“My personal expectations I think are aligned with what (the fans expect),” Frank said. “I would want them to expect championship-caliber baseball. … We went out as champions in 2018 … and we’re actually undefeated until next season, which is really a good thing.

“I want the fans here that are families and who have kids to look forward to coming to Jammers’ games for more than baseball.”

To that end, Frank said he plans to have an game-day experience that includes “safety, affordability, fun and entertainment.”

“Right from when you pull in and talk to the parking attendant, every single person that is going to be working here is going to be professional,” Frank added. “What I want to tell the fans of the Jammers is just look forward to a whole bunch of parties here. We’ll try and line them up with the best possible nights, promotions and whatever else we can think of to make it rocking in here.”

The Secrets of Champions Foundation is a 501 (c) (3) non-profit organization based in Jamestown. The mission of the foundation, according to its website, is to “enhance performance, teach leadership, enable upward mobility, facilitate healthy living, and improve quality of life among those in demographic groups who are historically underserved in this regard.”

Carlo, a Jamestown native, believes that Frank is the right man to help fulfill that mission.

“His father was one of the game’s greats, so that pedigree is certainly impressive, but after getting to know Frank a little bit, he’s just a first-class guy, and his enthusiasm is off the charts,” Carlo said. “That’s the seed and we’re going to grow from there.”

Frank also came highly recommended from another Jamestown native, Dan Lunetta, who is the longtime director of minor league operations with the Detroit Tigers.

“The community will love this guy,” Lunetta said, “and I believe he’s going to do an outstanding job. I have not seen a young man with the passion he has in a long time.”

Frank is one of Lunetta’s biggest fans, too.

“In the summer of 2016, I graduated college and I gave Danny a call and his first question was, ‘Are you willing to move anywhere?'” Frank recalled.

When the response was an affirmative one, Lunetta suggested that Frank attend baseball’s winter meetings. By 2017, he was in Vermont. Two summers later, he’ll now call Jamestown home.

“(Lunetta) has been a mentor to me for the last two years,” Frank said. “Any problem I’ve ever had, whether it’s job related, personal or anything, and I can bounce it off of him, I do. He’s just been an amazing friend. He was a friend of my dad’s, too.

“Not a lot of (casual) fans would know (Lunetta) by name, but anybody who is in baseball knows his name and what he does. He’s obviously one of my favorite people.”

And in a serendipitous scenario, Frank will take over a GM position at the stadium where Lunetta got his start in the game nearly 40 years ago.