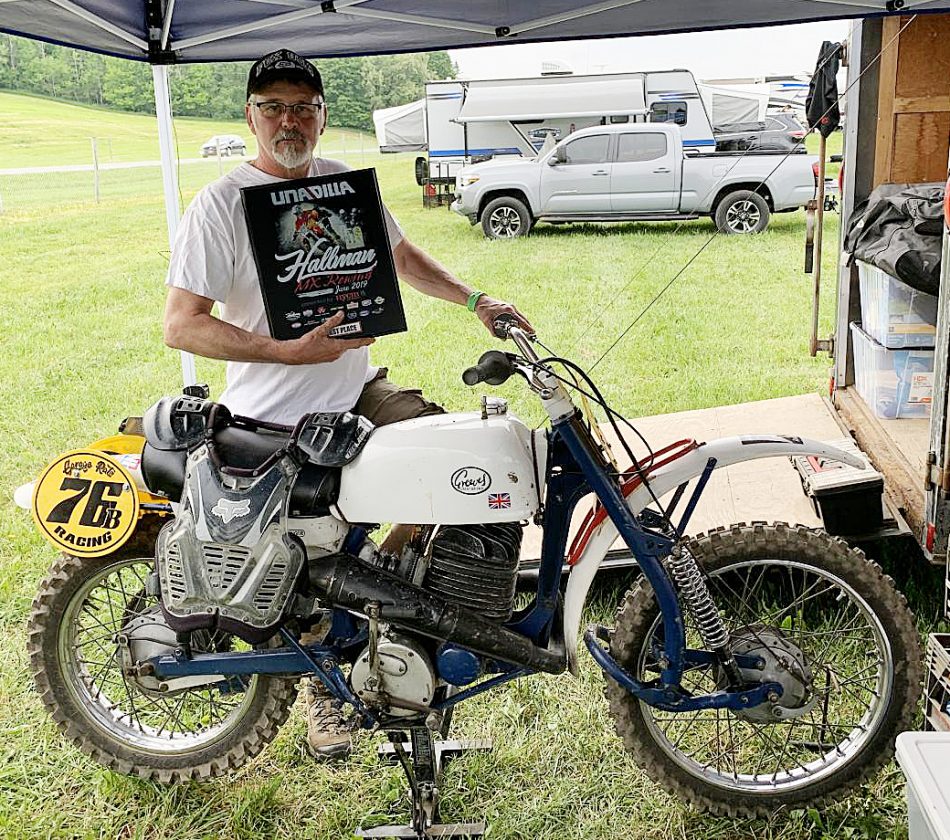 The Unadilla Motocross track lies just outside of New Berlin, East of the Finger Lakes region, and has been welcoming riders of all ages for decades.

While many of the races hosted at Unadilla feature competitive modern motocross of the sort you might find on TV on Saturday morning, there is also a growing segment of vintage races.

Brian Hildom of Kennedy has been making the trip East to the dirt at Unadilla for more than 30 years, and many of those recent trips have included bringing home some hardware.

“Since 1982 we have been going to that track in some form or another,” said the 59-year-old Hildom, who is a lifelong racer and a mechanic by trade.

During many of the recent visits, Hildom has made the trip along with his friends at the Garage Rats Racing Team. Along with team members like Jim DiFonzo, Chic Yachetta, Jim Sirianno and Jeff Sopak, the group has recently started competing in vintage races like the Unadilla MX Rewind National. In fact, 2018 was when Hildom first competed at nationals, taking home first overall after placing third in his first heat and first in his second.

The racing setup at nationals for vintage bikes has each rider compete in two different heats, with points being awarded to the highest finishers.

“I didn’t even know that I had won,” Hildom said of his first championship a year ago. “Some of the other guys had problems with their old bikes. One broke down and then the guy in second place crashed in the last turn.”

Motocross is a sport where surprises are not in short supply, and that excitement only gets ramped up when you wind the clocks back 50 or 60 years to the kind of bikes that Hildom now competes on.

The Kennedy native earned back-to-back titles in the 250 class after winning both of his heats in 2019– riding his recently rebuilt 1967 Greeves.

“It was in somewhat running condition,” Hildom said of his Greeves when he first found it. “I had to go through and make sure the engine was in good shape, brakes, wheel bearings, tires and electrical stuff. At Garage Rats Racing we are just a bunch of older guys who have been riding motocross for years. We don’t go as high and jump, and go as fast as when we were younger so we all went to vintage bikes.”

One of the best parts of vintage races is that riders get a change to compete against a huge number of different bikes, many from manufacturers that are long gone.

Classic companies like Greeves, Ossa, Husqvarna, Yamaha, Honda and Suzuki are just some of the kinds of bikes you will see flying around the track at the MX Rewind National.

“It is just a lot of vintage bikes,” said Hildom. “Obviously you are going to have mechanical difficulties in just trying to keep them running. There are all different brands of bikes that have been around and aren’t around any more. Everybody searches these old bikes out and fixes them up.”

When riders are getting ready for competition, their bikes are reviewed by the American Historic Racing Motorcycle Association, where they are put into a class along with other bikes of similar performance.

For plenty of people, the idea of racing a classic motorcycle or a car seems counterintuitive, because many are simply interested in searching out classics and repairing and restoring them for money.

But for Hildom and many others, breathing new life into these old bikes is a way of reliving history.

Shortly after his most recent win, Hildom sought out another old Greeves, and he is currently thinking of racing a different vintage bike when he returns to Unadilla next year.

“I have another ’75 Suzuki that I may fix up and get that together and race a different class,” he said. “I’ve had several people tell me with that (Greeves) bike that I own that I shouldn’t be riding it because it is such a collector’s item. I just bought another Greeves, a 67 SRT model, flat-track style bike. When they are completely restored they can be worth 10 or 15 thousand dollars.”

In the end, though, it is hard to put a price on the fun that Hildom and his crew are having.