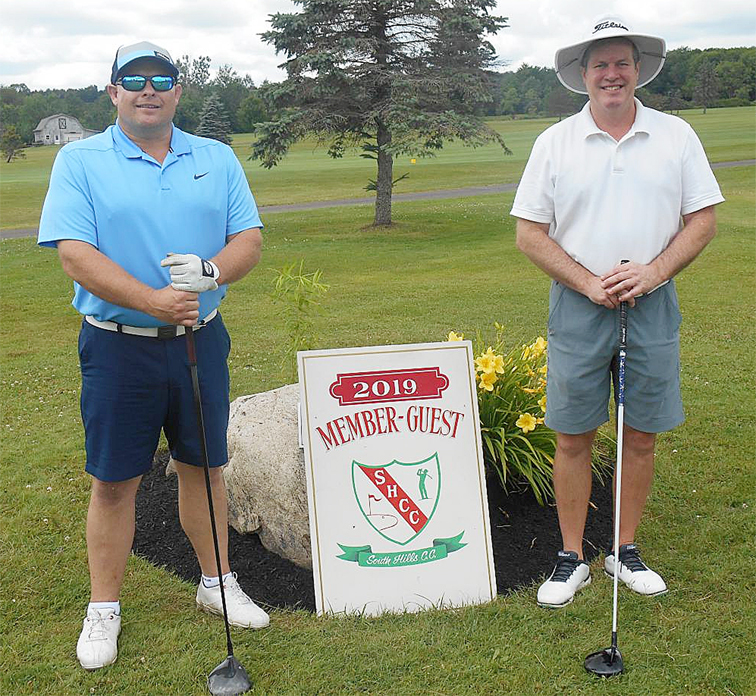 Jim Brown, left, and Tom Ames were the overall winners of the South Hills Country Club Member-Guest, firing a three-day total of 187. In the First Flight, Charles Volpe and Mark Panebianco finished first with a 188, Larry Case and Tracy Kirby were second with a 188, Jerome Davis and Jeff Keppel were third with a 190 and Gary Yager and Rick D’Angelo were fourth with a 190. Pat MacIntyre and Dave Munella topped the Second Flight with a 193, Dan Vincent and Keith Beckerink were second with a 193, Todd Hoaglund and Collin Whitermore were third with a 193, and P.J. Gronquist and Scott Kelemen were fourth with a 199. Topping the Third Flight with a 191 were Jamie Barton and Chris Pappalardo, followed by Chris Burnett and Chris Brink with a 194, Yogi Kent and Wayne Rishell with a 197, and Joe Gullotti and Craig Knorr with a 204. In the Fourth Flight, Tim Stam and Dave Bogdan led the way with a 216, Rich Brunecz and Jason Brunecz were second with a 216, Mike Peters and Bill Burk were third with a 217, and Kevin Pearson and Bill Thompson were fourth with a 218.

John Vincent and Cody Vincent had 62 while Greg Senyo and Mike Ponsoll had 61.5.

CASSADAGA — In the Tuesday Night Men’s Golf League at Cassadaga Country Club, Steve Wintersteen led the way with a 32, while Brenton Wilcox shot 33 and Todd Fenton 35.

Rob Lancaster was closest to the pin on No. 6.

LAKEWOOD — In the Mulligan Mama’s League at Maplehurst Country Club, Kathy Stedman led the way with a 41 gross while Theresa Jackson shot a 25 net.

ASHVILLE — In the Players League at Timber Creek Golf Course, Brenda Tarana led the way with a 40, while 46s came from Karan Murray, Kathi Ames, Heather Ames and Toni Indriolo.

Pam Simon and Dawn Strother each shot 46, with Strother earning a birdie on No. 16 while Anne Smith birdied No. 15.

ASHVILLE — In the Tuesday Morning Ladies League at Timber Creek Golf Course, Cindy Massey was the leader with a 47, while Doreen Murtaugh shot 49 and Debbie Illig 50.

ASHVILLE — In the Thursday Warren Sheet Metal Scramble, Jim Alexander and Keith Martin led with a 34 while Steve Hoyt and Tanner Delahoy tied Matt Beebe and Adam Beebe with 35s.

COLLINS — In the Gowanda Country Club Ladies League, Lynn Gotsch had a 45 gross and Trudy Jackson a 31 net in action from two weeks ago.

This past week, Nancy Rodriguez had a 44 gross and Joni Jackson a 35 net.

In Class B, Emma McCreary and Kathy Sloan tied for low-gross honors with 56s, Rosemarie Wilder shot a 37 net and Mimi Huffman had 15 putts.