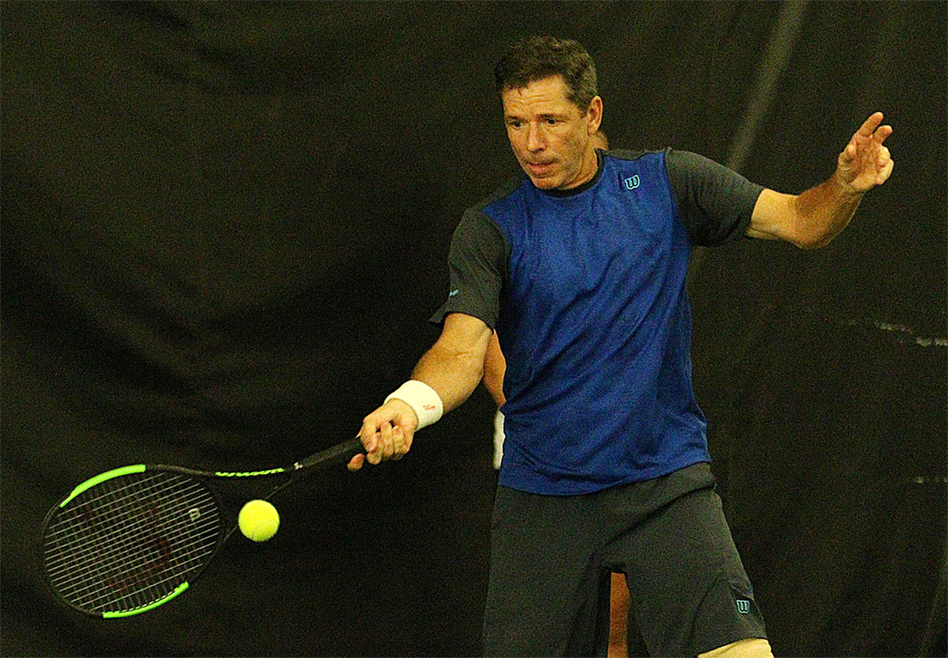 Jimmy Arias returns a volley during an appearance at the Lakewood YMCA last summer. The former fifth-ranked player in the world will be back at the Lakewood Y on July 27 where he will conduct clinics and play an exhibition.

LAKEWOOD — Jimmy Arias, the former No. 5-ranked tennis player in the world, will be returning to the Lakewood YMCA later this month.

The Grand Island native, who made an appearance at the Fairmount Avenue facility last summer, will conduct a pair of clinics, and a question-and-answer period during lunch; and play an exhibition match on July 27.

The children’s clinic will be held at 9 a.m., followed by the adult clinic at 10:30 p.m. After lunch and the question-and-answer session at noon, Arias will play an exhibition match at 1:30 p.m. with former University at Buffalo star Ethan Nittolo; UB tennis coach Lee Nickell; and Tim Videnka, currently ranked 18th in the United States Tennis Association 40-and-older singles.

Arias, now 54, turned pro at 16 in 1980, and peaked in 1983, when as a 19-year-old, he finished the year ranked No. 6, having reached the U.S. Open semifinals by defeating Jonathan Canter, Tom Gullikson, Gianni Ocleppo, Joakim Nystrom and Yannick Noah, and then lost to Ivan Lendl. He also won the Italian Open and three other tour grand prix events.

At last year’s appearance at the Lakewood YMCA, Arias talked about his quarterfinal victory over Noah in the 1983 U.S. Open.

“I remember trying to swallow (ahead 6-5 in the fifth set) and I couldn’t swallow (because of nerves). I decided I’m going to aim right down the center and hit it as hard as I can to give myself the best chance. I ran around and hit it for an angle winner. I missed my spot, but it looked like I was so clutch and calm, because I did smash it. I won it, 7-5, in the fifth (set).”

If the exhibition match later this month is anything like last year’s, it should be quite entertaining. In 2018, Arias, despite playing with a sore knee, won both his exhibition doubles matches. In the first one, he teamed with Dusty Nelson to down Martin Hoch and Matt Johnson, 6-4, 6-4. In the second match, Arias and Johnson held off Nelson and Hoch by the same score.

Following is some biographical information on the other three players in the exhibition:

¯ Three-year captain for UB, who clinched the 2017 Mid-American Conference championship.

¯ Was the recipient of the MAC Sportsmanship Award his senior year.

¯ Played No. 1 singles and doubles at Furman University.

¯ His coach was Paul Scarpa, the all-time winningest head coach in Division I history.

¯ Coached collegiately for more than 15 years, with stops at the University of Alabama and Fresno State.

¯ Inherited a UB team with only five conference dual-match wins, but has since led the Bulls to five MAC championships and been named the MAC Coach of the Year three times.

¯ Was named the Northeast Division I Head Coach of the Year in 2017.

¯ Growing up in Canada, he was among the best juniors in the country.

¯ He played four years and was captain at Rollins College in Winter Park, Florida where he took the team to a second-place finish in the 1996 NCAA Division II Tournament.

The cost for the event is $60, which includes the clinic, lunch, question-and-answer session and exhibition. For the exhibition only, the fee is $10. For more information, call the Lakewood YMCA at 763-0303.