Carlson Off To Good Start In Bid For Browns’ Roster Spot 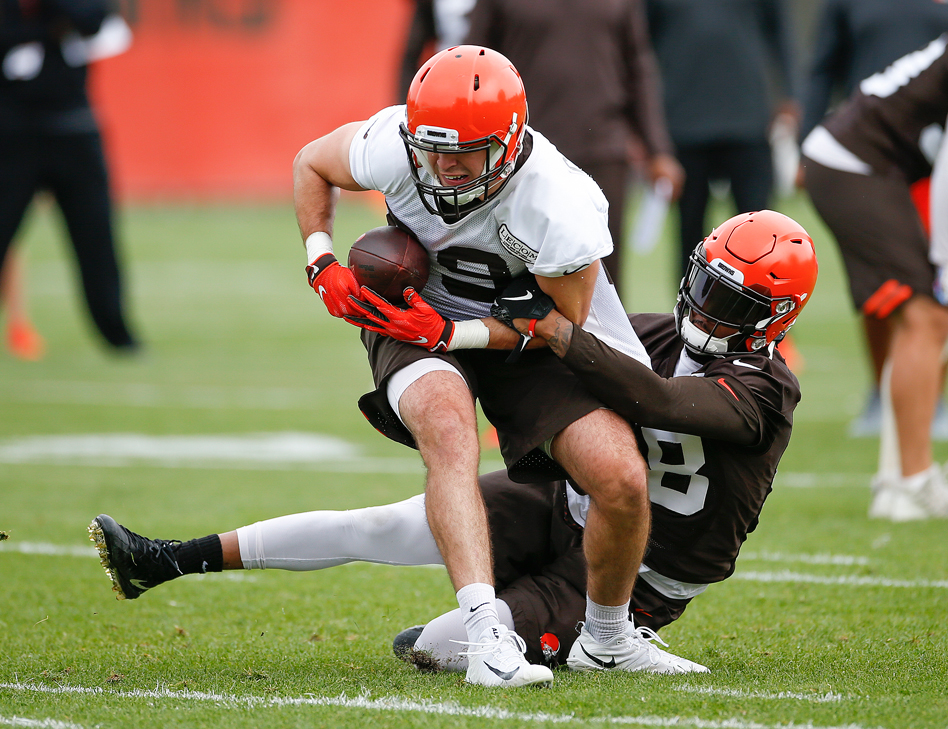 Stephen Carlson admitted he didn’t know anything about it until his cellphone started blowing up as messages poured in from all directions.

The reaction was prompted by a 35-second video clip that was part of a longer 30-minute segment that the Cleveland Browns put out on their website during their mandatory minicamp last month. In it, Carlson, the rookie tight end from Jamestown, catches a pass, and Cleveland’s offensive coordinator, Todd Monken, figuratively goes off the rails with excitement.

Moments later, Monken continues his monologue about the Jamestown High School and Princeton University graduate while in the presence of the quarterbacks, including Baker Mayfield.

“Feed the man, they’re not doubling him. … Not Carlson,” Monken says. “It was Ivy League vs. the U.” 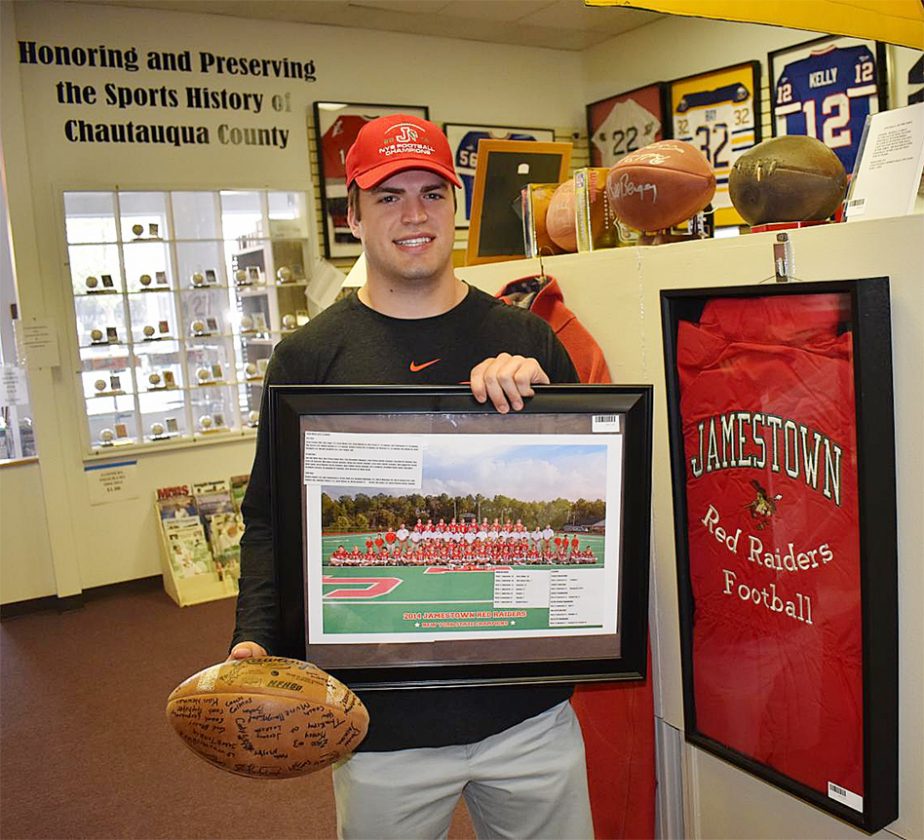 Stephen Carlson paid a visit to the Chautauqua Sports Hall of Fame earlier this week where he found plenty of memorabilia from Jamestown High School’s run to a 2014 New York State Public High School Class AA football championship. Carlson was a first-team all-state player on that team. P-J photo by Scott Kindberg

The former Tiger and Red Raider had won the battle with a defensive back with a University of Miami pedigree, capping what Carlson described as “probably one of the better days I’ve had.”

“I had like two touchdowns and a couple nice catches against some guys on the first-team defense,” he told The Post-Journal earlier this week. … I guess the coaches acknowledged it a little bit.”

Being recognized at this time of year by NFL coaches for doing something well is always special. Making it happen when you’re an undrafted free agent from an Ivy League school is even more impressive.

“In rookie minicamp (in May), I’m pretty sure I was perfect in my one-on-ones,” Carlson said. “I just felt really confident after that. Maybe I can play.”

Carlson walked into the Chautauqua Sports Hall of Fame in downtown Jamestown earlier this week and was eventually escorted to a display featuring Jamestown High School football memorabilia that included a team photo of the Red Raiders’ 2014 New York State Public High School Athletic Association Class AA championship team. He was also handed an autographed pigskin with the signatures of members of that squad, including his own; and a championship cap that he tugged down on his head.

But not quite five years from that magical season, which was capped by a final victory at the Carrier Dome in Syracuse, the 6-foot-4, 240-pounder has, so far, shown he is ready for yet another challenge.

A crack at the National Football League.

“After I got signed, but before even rookie minicamp, I was pretty nervous going into it, just because I was a smaller-school guy,” Carlson admitted. “Maybe, in the back of my mind, it was like a pity thing that they signed me, but after the first couple practices I felt completely at home and felt like I was competing with the best of them.”

The tight ends on the preseason roster include: Pharoah Brown of Oregon; Orson Charles of Georgia; Princeton alumnus Seth DeValve; Demetrius Harris of Wisconsin-Milwaukee; and David Njoku of Miami.

“I’ve actually been pleasantly surprised with how welcoming and nice all the veterans have been, especially in the tight end room,” Carlson said. “They’ve pretty much treated me like I’ve been there for a few years already, and have included me in everything.”

Carlson is in the midst of a three-week break before training camp begins in Berea, Ohio on July 25. He was planning to head to Princeton this weekend to work out with former college teammates Jesper Horsted and John Lovett, who are in the camps of the Chicago Bears and Kansas City Chiefs respectively.

“If I come into (camp) knowing the playbook, and I’m conditioned to run nonstop the entire practice and I feel confident, that’s what’s going to make me play the best,” Carlson said. “I know I have good enough hands to catch contested balls and run good routes right now.”

So how does he view his chances of finding a permanent role with the Browns once the regular season begins in September?

“I think it will definitely be pretty tough to make the 53-man roster, but (making) the practice squad I think I have a pretty decent shot,” Carlson said. “There’s five other tight ends — two of them are pretty much locks (Njoku and Harris) — and the third (spot) is kind of up for grabs a little bit.

He continued: “If I just show up and make plays every day, and have a bunch of days like that day I had in minicamp, I think it’s a possibility I can make the team, but we’ll see what happens. My goal is to make the team or the practice squad, and I’m doing everything I can to get there.”

By the way, the “just-throw-it-to-Carlson” video that received so much attention last month is part of an online series called “Building the Browns.”

The young man who grew up on Jamestown’s northside has laid a pretty solid foundation so far.

“It’s the real deal now,” Carlson said. “It’s just been the rookies the last three weeks. Once the veterans come, everybody will be competing for spots.”