Jordan Basile, right, signs his contract to be the new field manager for the Jamestown Jammers on Monday afternoon at Diethrick Park. Joining him is Dr. George Carlo, a board member of Jamestown Community Baseball LLC and chairman of the Secrets of Champions Foundation. The Jammers will re-enter play in the Perfect Game Collegiate Baseball League next season. P-J photos by Scott Kindberg 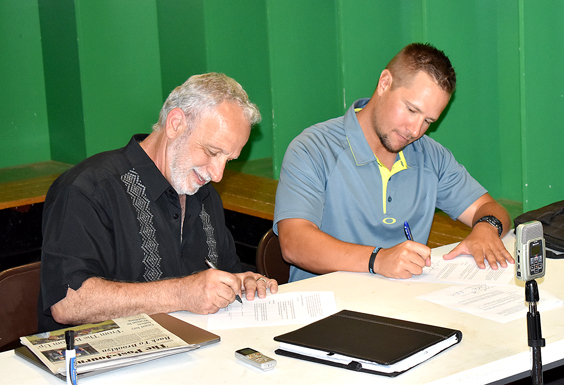 Jordan Basile, right, signs his contract to be the new field manager for the Jamestown Jammers on Monday afternoon at Diethrick Park. Joining him is Dr. George Carlo, a board member of Jamestown Community Baseball LLC and chairman of the Secrets of Champions Foundation. The Jammers will re-enter play in the Perfect Game Collegiate Baseball League next season. P-J photos by Scott Kindberg

How good was Jordan Basile during his baseball career at SUNY Fredonia from 2006-09?

In every measurable statistical category, the Jamestown native is one of the finest players in Blue Devils’ history, but his best days in the game may be yet to come, according to Dr. George Carlo, the chairman of the Secrets of Champions.

“When you get to a certain age, like me, you’re able to sense when somebody has it,” Carlo said during a press conference Monday at Diethrick Park announcing Basile as the new manager of the Jamestown Jammers. “It was very clear from the beginning that Jordan had that sense of the game. He had it.”

The Detroit Tigers’ organization took notice a long time ago. 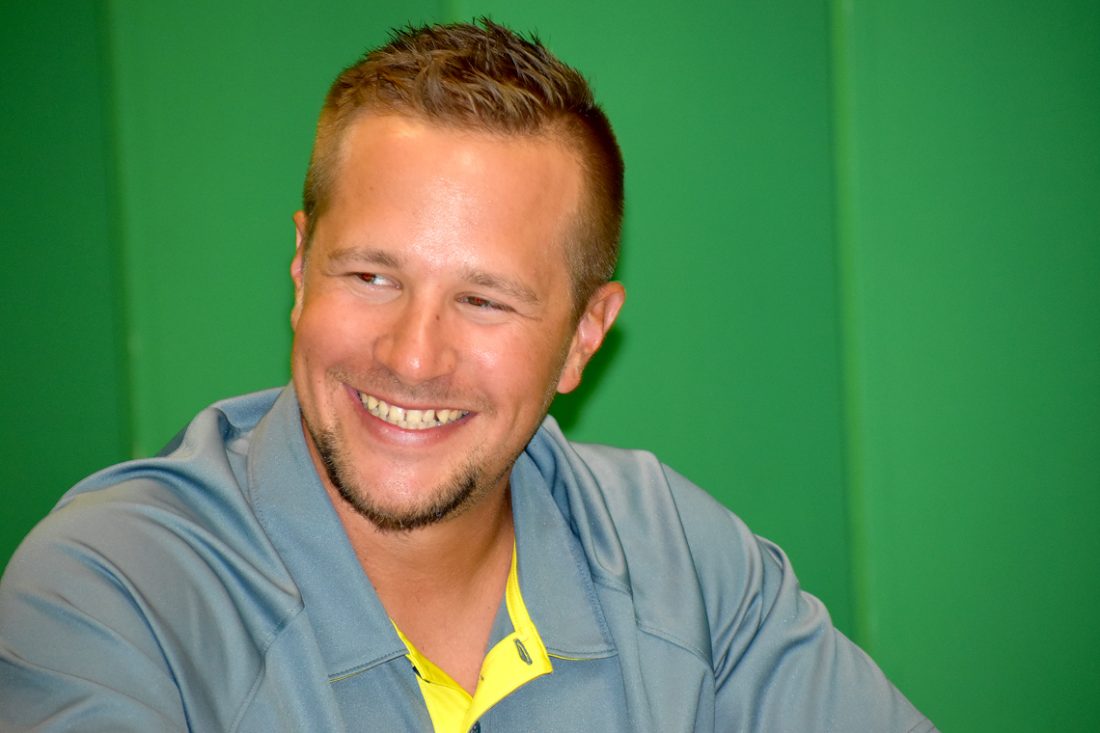 Just two years removed from his playing days at SUNY Fredonia, Basile worked in player development with the big-league team at its spring-training headquarters in Lakeland, Florida. He opened some eyes there, including those belonging to Carlo, who also worked for the Tigers in 2011.

“Even when we were dealing with major league players, he was still able to pick up little things that were not obvious to everybody,” Carlo said. “So having Jordan here, in terms of his ability, there is no better baseball man that would be a fit here.”

And while the Jammers won’t take the field for a Perfect Game Collegiate Baseball League game for another year, Basile has already got a jump-start on his new job by beginning the recruiting process.

“The communication with coaches begins today,” said Basile, noting that it is “highly likely” that he has two players from Bethune Cookman University and Wingate University already committed to coming to Jamestown next summer.

Of course, Basile, who played at Diethrick Park during his high school days, won’t have any trouble “selling” the experience here.

“I think (the PGCBL) is truly one of the best summer-ball leagues in the country,” he said, ” … and I can’t see that there’s a facility or opportunity that’s better than the one in Jamestown.”

After his tenure with the Tigers, he secured positions as an assistant coach for the University at Buffalo and Lake Erie College. Currently the head coach at Patrick Henry Community College, Basile also serves as an adviser to USA Baseball and is credentialed as a certified Secrets of Champions integrated performance coach.

“It’s not by accident that the game is being turned over to this present generation, who understand social media and they understand how to communicate with the players at a level that is very different than the historical aspect,” Carlo said. “We’re ahead of the game here. I think the Jammers’ fans in Jamestown are in for a real treat.

“I have the highest esteem for Jordan, the highest respect for his abilities and we have good things coming down the pike.”

In addition to beginning his recruiting efforts, Basile’s immediate order of business will be directing the inaugural Secrets of Champions Foundation-Jamestown Jammers baseball development clinics, which will be held Aug. 12-15. The four-day clinic series includes a special course for coaches of all levels; comprehensive skills and performance clinics for both age 18-and-under and 12-and-under players; a continuity orientation for parents; and a day for athletes with disabilities.