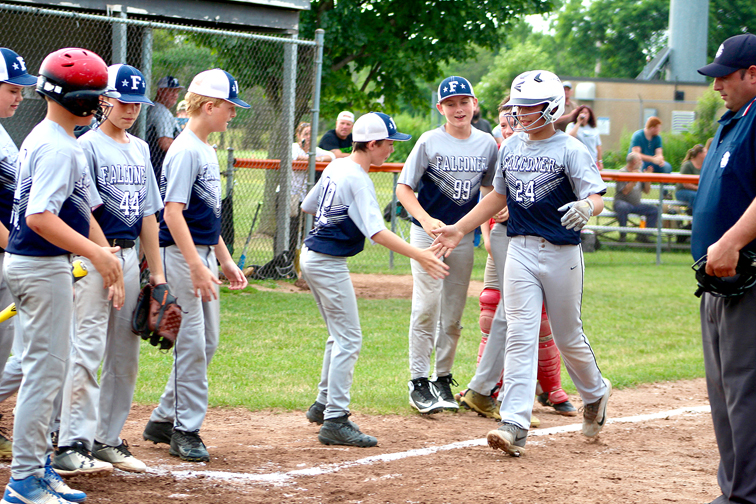 FREDONIA — Ashton Putney allowed three hits and one run while striking out seven as Fredonia beat Falconer 11-1 in four innings of their semifinal.

Fredonia scored a run in each of the first two innings, then two more came in early in the home half of the third inning to double the lead. With a 4-0 lead, Colin Luce came to the plate with the bases loaded and cleared the bases with a triple to deep left-center field to put Fredonia ahead 7-0. 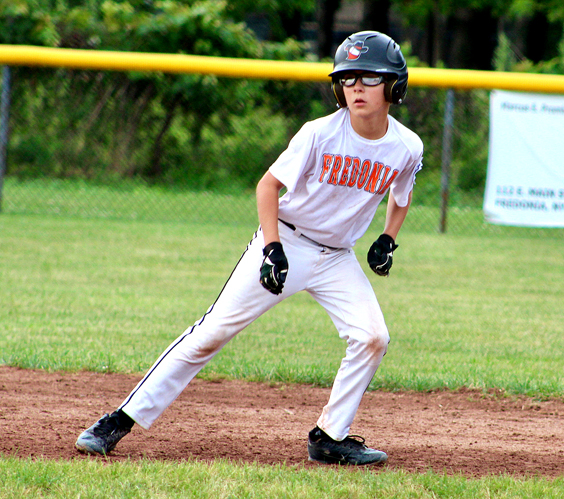 Fredonia added four more runs in the bottom of the fourth inning, putting the 10-run mercy rule in effect after the game’s 11th run crossed the plate.

RANDOLPH — Heavy afternoon rains made the field at Weeden Road Park unplayable for the scheduled semifinal between Area B No. 1 seed Southwestern and Area A No. 2 seed Brocton-Portland on Tuesday. 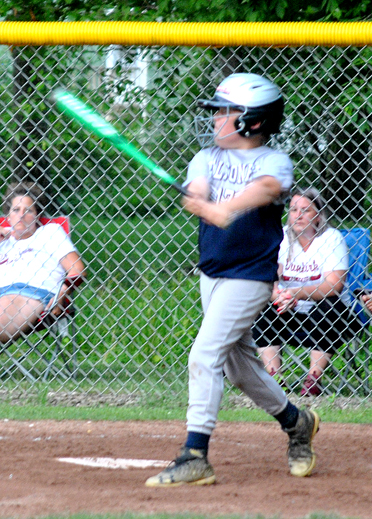 Falconer’s Blake Diate drives in the winning run in his team’s 11-1 win during a 9-10 semifinal in Lakewood. Submitted photo

LAKEWOOD — Chase Bianco drilled four hits, including a triple and double, and drove in five runs to lead Falconer to a 17-7 win over Dunkirk in the semifinal round of the playoffs.

Zavyer Mayr hammered three hits with a triple, while Connor Brentley added a double. Blake Diate singled to drive in Bianco in the bottom of the fourth inning to end the game via the 10-run rule.

Erik Stenstrom picked up the win on the mound and combined with Mayr for 10 strikeouts.

SYRACUSE — The Southern Tier Regulators’ hopes for a spot in the Babe Ruth World Series came to an end Monday.

After advancing to the winners’ bracket with a 7-6 victory over Lackawanna (Pa.) on Saturday, the Regulators lost, 5-0 to Pine Forge (Pa.), and 10-6 to Onondaga on Monday.

In the 5-0 loss, Lance Baldensperger and Trey Swartz had the Regulators’ lone hits. Kyler Majka struck out three and allowed eight hits in 4 2/3 innings on the mound before Lucas Willink got the final four outs.

In the 10-6 loss, Southern Tier led 6-1 as late as the fifth inning, but Onondaga scored three times in the bottom of the fifth and six more times in the sixth to pull out the victory.