Southwestern’s Gianna Hoose throws the discus during the NYSPHSAA Track & Field Championships on Friday in Middletown.

The Trojans’ Cassidy Allen clears the bar in the pole vault.

Georgia Military College coach Charles Van Horn III and second-place finisher Dusty Watts are pictured during the final round of the NJCAA Division III Golf Championship at Chautauqua Golf Club on Friday. Georgia Military College won the team title with an 83-over 1,235 for the tournament. Second, individual champion Trey Capps of Sandhills (N.C.) Community College watches a tee shot during the final round. P-J photos by Mark L. Anderson 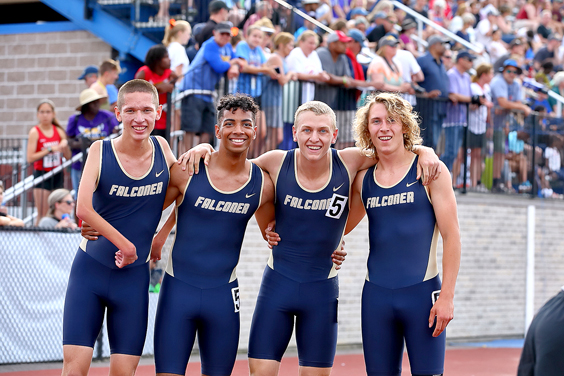 MIDDLETOWN — The Falconer/Cassadaga Valley track and field program left the grounds of Middletown High School with some hardware in tow after the first day of the New York State Public High School Athletic Association Championships.

Despite team members Bryce Baglia and Rayven Sample running individual races earlier in the day, they joined teammates Austin Johns and Collin Barmore in winning the Division II 1,600-meter relay, edging out Our Lady of Lourdes with a time of 3:21.11.

Two hours previously Baglia earned a medal in the 800 meters, finishing sixth in Division II and 12th overall at 1:56.09 while Sample took home 12th in the Division II 400 meters with a time of 50.81.With 30 or 40 meters to go in the relay, Baglia found himself in a foot race with the anchor from Lourdes.

“We probably had a 15-meter lead going into the handoff and Bryce was our anchor,” Nelson said. “The kid pulled up even with Bryce with 30 meters to go and Bryce dug deep, just edged him out at the finish.” 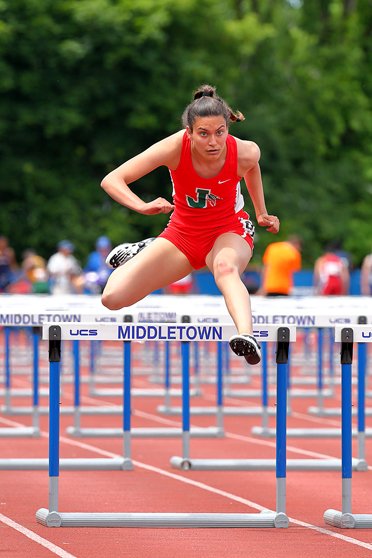 While Nelson would normally hesitate to have relay runners compete in earlier races, he felt confident that the preparation his runners went through with the assistance of coach Nick Spry would pay off.

“Normally I wouldn’t really want kids to run before a relay but we thought they both had a chance to medal and Bryce did,” Nelson said. “Coach Spry and I knew that with their training they could do both.”

Nelson said it was most important on race day was to make sure that his runners were adequately fed, rested and hydrated.

John Swabik of Clymer/Sherman/Panama leads the pentathlon for Division II athletes after three events on the opening day of competition and is in third place overall with 2,056 points.

Michael Wolford of Lancaster has 2,182 points, John Poplawski of Walt Whitman 2,083 while Carson Crist of Maple Grove is in ninth place overall and fifth place in Division II with 1,912 points. 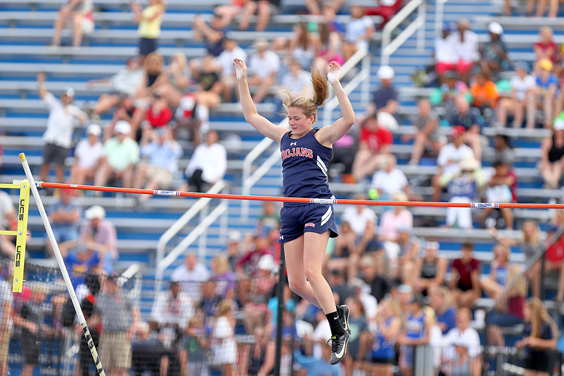 The Trojans’ Cassidy Allen clears the bar in the pole vault.

“He has got himself set up pretty well,” C/S/P head coach Pam Warner said of Swabik. “He started the day with the 110 hurdles and he ran 15.9 which is where he has been running most of the year.”

Crist finished just behind Swabik in that race with a 15.91.

Swabik led all competitors in the high jump with a height of 6 feet, 4 inches.

“He has been adding another inch here and there. He didn’t look good to start and I think that as soon as (Poplawski) from Walt Whitman went at 5-11 you could see the weight lifted off of his shoulders,” Warner said. “He just relaxed and started to attack the bar and won it with a new personal best.” 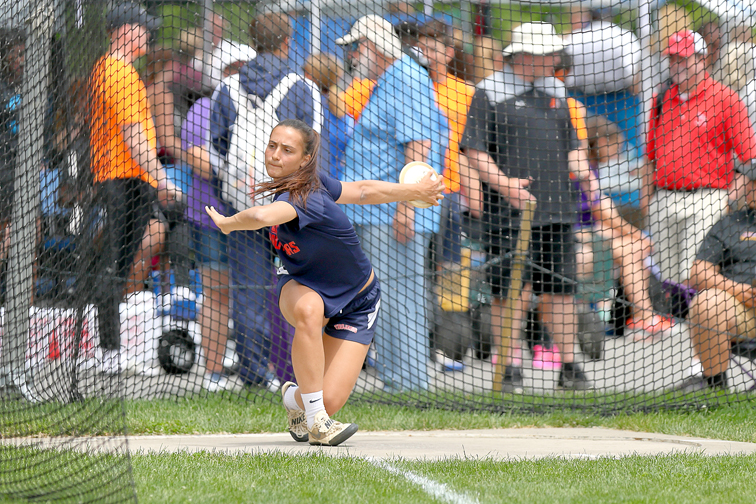 Southwestern’s Gianna Hoose throws the discus during the NYSPHSAA Track & Field Championships on Friday in Middletown.

In the final event of the day Swabik grabbed 10th, hurling the shot put 37 feet, 6 inches while Crist grabbed seventh with a mark of 39 feet, 6 inches.

In her first trip to the state meet, Schnars has 1,650 points after three events while Zaria Fuller of Uniondale leads with 2,262.

“She was seeded ninth overall so she is hoping to finish in the top eight in the federation,” Warner said. “Her goal is to just do better than last week point-wise.”

Samantha Gilbert also had a big day for Falconer/Cassadaga Valley. The junior finished fifth in the Division II long jump at 17 feet, 4 inches, while Jade Foster of Unatego took home the win at 18 feet, 8 1/4 inches.

Gilbert took home eighth in the triple jump with a mark of 35 feet, 6 1/4 inches.

Gianna Hoose of Southwestern took home sixth in the Division II discus with a throw of 110 feet, while teammate Cassidy Allen grabbed 15th in the pole vault and eighth in Division II with a height of 10 feet.

Mushirah Sheppard of Salamanca finished just ahead of Allen at 10 feet.

Jericha Petrella of Dunkirk grabbed second in the Division II 400 meters with a time of 57.55 with Eve Balseiro of Bronxville taking first (57.06).

Jamestown’s Giovana Calamunci finished in 15th place in the preliminaries of the Division I 100-meter hurdles with a time of 16.08.