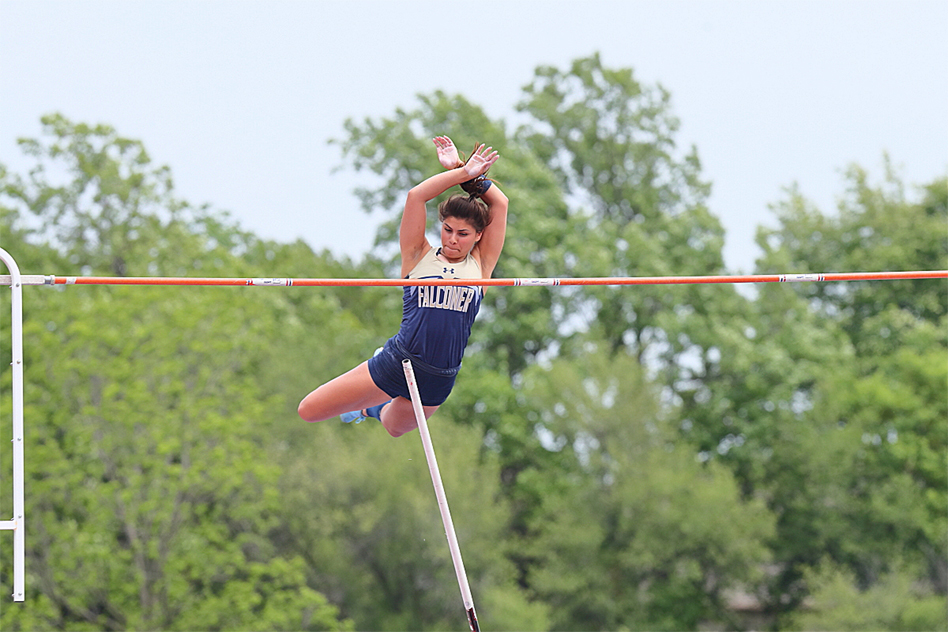 WILLIAMSVILLE — A host of runners, jumpers and throwers from the area have punched their tickets to the New York State Public High School Athletic Association Track & Field Championships after a successful day of action at the Section VI Championships at Williamsville South High School on Saturday.

With two days of competition in the books, athletes will now prepare to make the journey to Middletown High School next Friday and Saturday.

Samantha Gilbert of Falconer/Cassadaga Valley will be competing in a pair of events in Middletown after taking home the Division II long jump with a mark of 17 feet, 10.75 inches on Friday.

“I knew she had these jumps in her, it was just a matter of can you do it in competition?,” said Falconer/CV coach Mike LeBaron. “Samantha and I devised a practice plan that we stuck to last week to the T and it worked out for her. We knew we weren’t going to win the sprints, the sprints are loaded. We were just hoping to get a patch there and by running the sprints it kept her moving instead of just sitting around.” 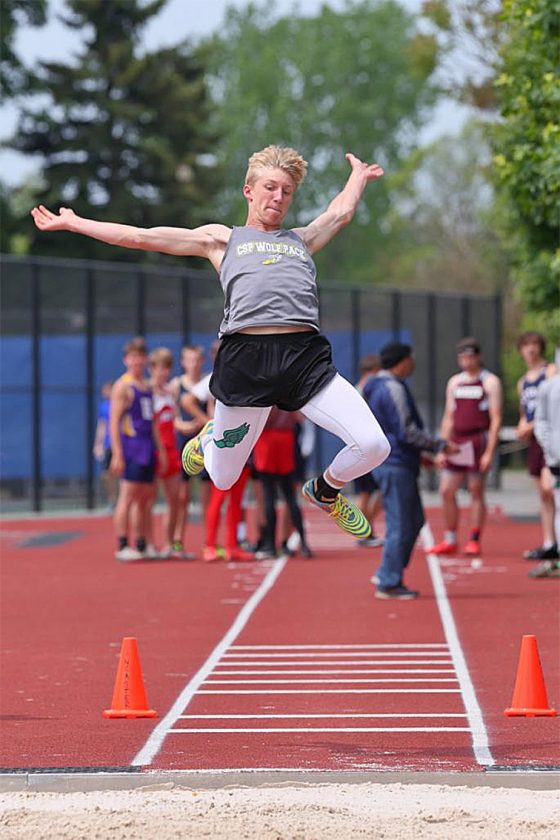 Clymer/Sherman/Panama’s John Swabik soars through the air in the Division II boys pentathlon.

Gilbert’s teammate Rachael Ward will make the trip east as well next weekend after claiming the pole vault with a height of 12 feet, 4 inches. Ward reached her personal best on the year at 12-9 last week in Olean.

“When she got the 12-4 she opted to go right to 13-0 because that is the height we are hoping to see next weekend. We don’t want that to be the first time she sees it,” said LeBaron. “She is going to vault in the New Balance National Meet in two weeks down in North Carolina, which is awesome.”

Mushirah Sheppard of Salamanca took second at 10-6, hitting the state standard in the process.

Gianna Hoose of Southwestern shined in the field on Friday, taking home the Division II discus with a toss of 106-11.

“She struggled early on in her first set of throws and actually went in to finals seeded third,” said Southwestern throwing coach Adam Brown. “I was really proud of the fact that she came in and stepped up and did what she was capable of doing, still being able to go on a day where she wasn’t near her best. Now she’s just excited to go to states and have fun.” 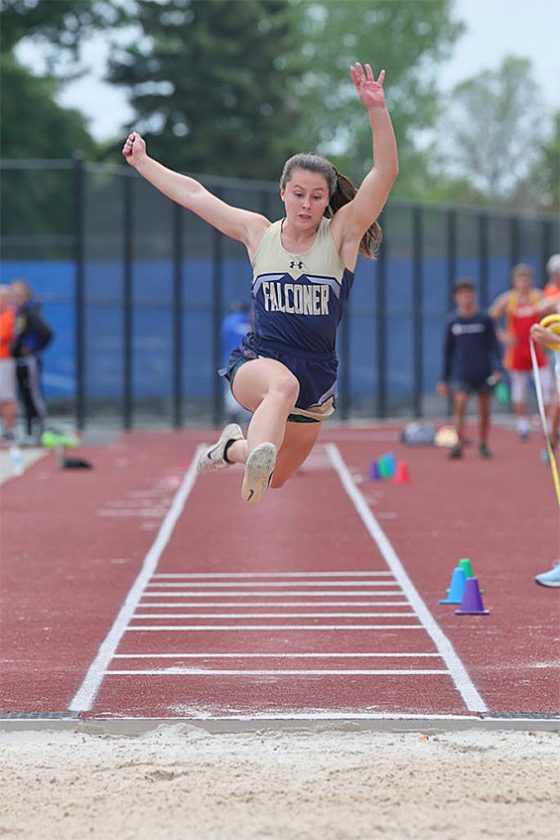 Cameron Barmore of Clymer/Sherman/Panama will make a return trip to states after taking home the Division II high jump for the Wolfpack. Barmore and Jake Kaminski of Cheektowaga both finished the day at 6 feet, 6 inches, with the former grabbing first place due to jump attempts.

“He’s been training hard, hitting the weights a little bit more, and actually do a little bit more speed work and stuff. I think it is really helping his jumping,” said C/S/P coach Pam Warner. “His personal best is 6-7. He is aiming for 6-8 which is Panama’s school record. Today the boys cleared 6-6 and they had the option of going up another inch. He and the (Kaminski) both decided to go to 6-8 and he had it. Unfortunately the vibration from the mat caused the bar to fall off. I think his goal for the year is to finish at 6-8.”

“This year it is like an exponential growth with him. He’s really working hard. He’s working hard and he has his goals set on winning states and being on podium at the Federation meet,” said Warner.

Just behind Swabik was Maple Grove’s Carson Crist with 3,133 points, achieving the state standard and also earning a new Maple Grove school record along the way. 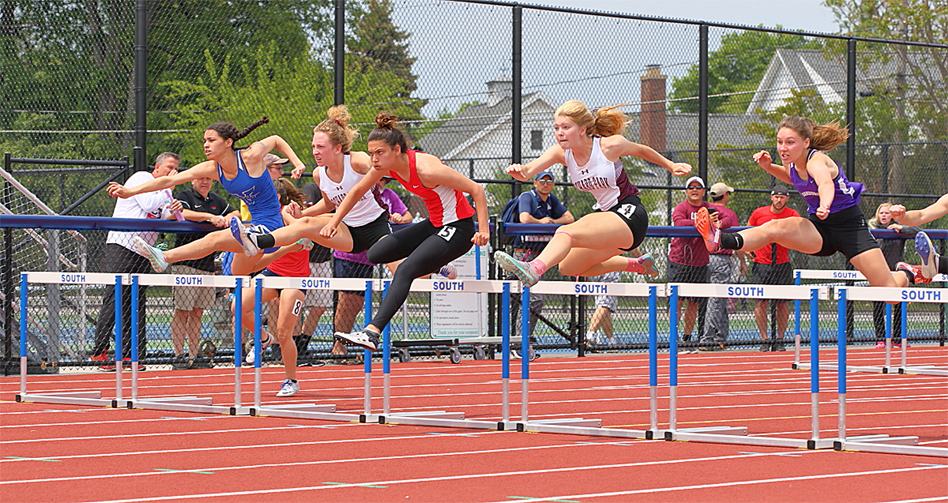 “John is a competitor, as is Carson,” said Maple Grove coach Bob Goold. “Carson got off to a bad start because he had a bad hurdle race. He was about a second off so he lost about a 100 points there. After that they were neck-and-neck in things. John beat him a little bit in the high jump by an inch or two. But they both had really, really good meets.”

Swabik’s teammate Kylie Schnars has also qualified for the state meet in the girls pentathlon, finishing with 2,807 points behind Jayna Galley of Holland (3,132).

Falconer/Cassadaga Valley’s Bryce Baglia will be heading to the state meet in a pair of events after his performance Saturday.

“I knew I could win it coming in,” Baglia said of the 800. “I had a good kick coming in and I wanted to stay in front the whole race. I wanted to get out in front and claim the No. 1 spot and I did that. It stayed that way the whole race, came through the first lap and I hit my split I wanted to hit, started picking it up every 100 meters and just gave it all I’ve got that last 200 meters.”

While warming up for the final race of his day, Baglia was sure that his team had the right stuff to finish on top of the podium in the 1,600.

“We’re going to win it, we already got the state standard,” Baglia said at the time. “We’re just going to claim our spot. We really want to take first for this one.”

Jamestown will be represented at the state meet by junior Giovana Calamunci. She was victorious in the 100-meter hurdles in 15.70, well ahead of the field.

One of the day’s best races came in the girls 1,500 meters between Ava Crist of Maple Grove, Kylee Odell of Clymer/Sherman/Panama and Nicole Kuehner of Iroquois.

It looked as though Kuehner would fight her way to a win, but both Crist and Odell were able to mount late charges for a photo finish at the line. Crist would get the better of the final steps, finishing at 4:45.50 while Odell was a hair behind at 4:45.81.

“We kind of knew coming in that that would be a pretty tight race,” said C/S/P distance coach Ray Shrout. “I think all three of those girls that were out front battled hard, that was probably one of the best races of the day among those three. We were kind of bummed that Kylee didn’t make it. We were kind of hoping that she would go back to states after going last year. She missed the state standard by about half a second.”

Ronan McDonald, Christian Riethmiller, Deiter Miinte and Josh Walters of Randolph took home second in the 3,200-meter relay in 8:11.32, hitting the state standard in the process.

That is a group of Cardinals that has fought through adversity on their way to state qualifying, as Miinte was hampered by a hip injury throughout March while McDonald was not able to train for the early part of the season.

“We knew we had a chance at making it,” said Randolph coach Paul Steward. “Our seed time was 8 seconds slower but we knew we had the potential to do this. A couple of my runners were a little bit banged up. We made the standard by the slimmest of margins and (Josh) was pushing himself with nobody around him front or back. He did a great job pushing himself on that.”

Cameron Calimeri of Southwestern finished second in the long jump with a mark of 20-10.25 while Grant Moore of Jamestown was second in the Division I high jump at 6 feet, 2 inches, which is the state-qualifying standard.

Fredonia’s Emily Brown will make the journey to Middletown after taking home the Division II 2,000-meter steeplechase with a time of 7:11.12.