Jammers Have A Home 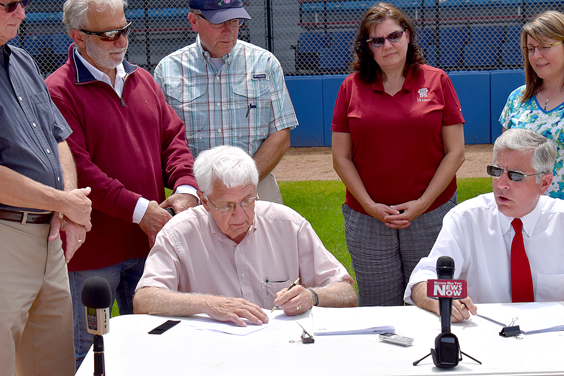 With Jamestown mayor Sam Teresi looking on at right, Russell E. Diethrick Jr. signs a lease transfer Monday afternoon establishing Jamestown Community Baseball LLC as the primary tenant of the ballpark that bears his name. Diethrick is the president of the JCB board of directors.

Russell E. Diethrick Jr. stood in the left-handed batter’s box at the ballpark that bears his name Monday afternoon, while Sam Teresi stood in the right-handed box.

Together, the two men believe they’ve hit a figurative home run by clearing many of the obstacles that will ultimately allow the Perfect Game Collegiate Baseball League to return to the city in 2020.

The reason for his enthusiasm during a sun-splashed press conference was the knowledge that by him signing a lease transfer agreement with Diethrick, and the latter’s Jamestown Community Baseball LLC, the return of the Jamestown Jammers is one step closer to becoming a reality a year from now.

The signing does two things, Teresi said. The first allows JCB LLC to assume the lease for Diethrick Park from the previous tenant, which was Jamestown Baseball LLC, a division of Roc Enterprises of Milwaukee. Secondly, Teresi and Diethrick signed an extension of that lease through the 2025 playing season.

Yesterday’s signings capped an eventful couple months for the new ownership group, beginning with the City Council approving a resolution in April that allowed for Monday’s actions.

“There are always hurdles, but the big (actions) are in place right now,” Teresi said, noting that the new owners have secured from the PGCBL assurance that they can re-enter the league in 2020, but without a new franchise fee.

“(The new ownership) will be able to re-enter their league play, with paying of the annual dues and presenting a business plan that the league will finally accept,” Teresi said. “Everything is falling into place nicely, which leads us to today to the point where the city is able to sign off on the necessary documents.”

A lifelong baseball fan, Teresi reminded the gathering that included, among others, city officials, JCB LLC board members, front office personnel and local media, a quote from Hall-of-Famer Ernie Banks, who once said, “It’s a great day for a ballgame; let’s play two.”

With apologies to “Mr. Cub,” Teresi offered a slightly different interpretation of that quote:

“We’re not going to play two (years),” he said. “With the lease extension being signed today, the Jammers are going to be playing six.”

Announcements about staff, players, sponsorship and, ultimately, the team investors will be announced at a later date, Teresi said.