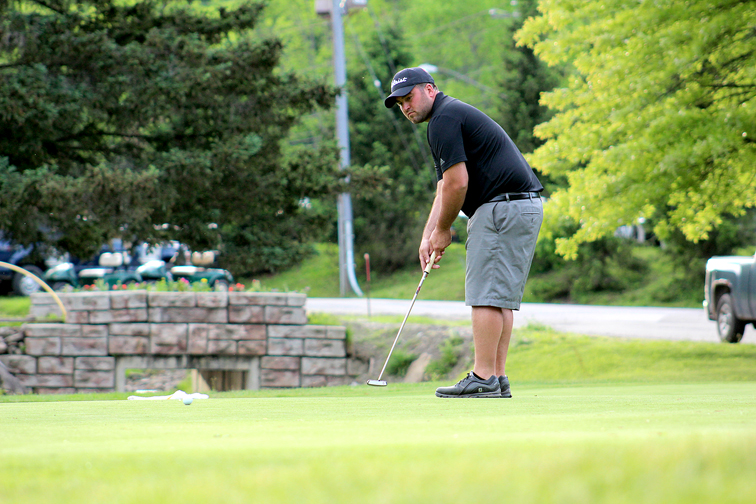 John Foti putts on the 18th green during the final round of the 49th Italian-American Golf Tournament on Saturday at Holiday Valley Resort. Photo by Cam Hurst

Not only had the 32-year-old son of Rob and Diane Foti and partner Dan Cotter paced day one and two leaders Todd D’Angelo and Joe Willig all day Saturday, but he had minutes earlier sunk a fast 6-foot putt to save face and possibly force a continuation Sunday morning.

But after Willig missed on a subsequent 3-footer, the comeback by Foti and Cotter was officially complete, giving the pair their first overall victory in the 49th Italian-American Charity Golf Tournament at Holiday Valley.

“It’s a huge monkey off my back,” Foti joked, finally finding words for the accomplishment, noting his father Rob’s victories in 1995 and 2010 with partner Craig Lundgren, and brother Dave’s victory in 2014 with Nick Madden.

“To finally win it after my dad and my brother had done so, it’s just amazing,” he said of winning the tournament that has benefitted cancer research since 1971. “It’s such an amazing cause and such an amazing tournament and we grinded all day to get here. It’s just an awesome feeling.” 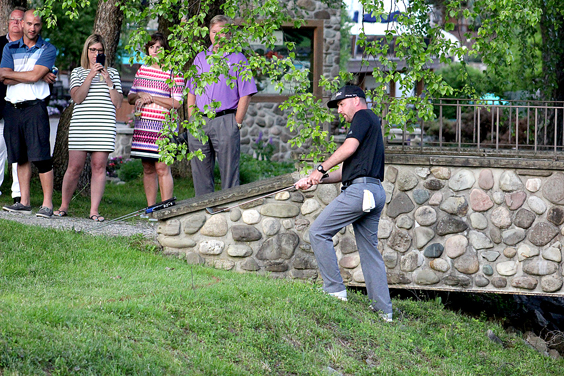 Dan Cotter hits from a hazard on No. 18. Photo by Cam Hurst

Entering the day down two strokes to D’Angelo and Willig’s 123 overall, Foti and Cotter stayed with the pair, who were last victorious in 2016. After nine holes, the victors had taken a one-stroke lead, yielding it after the 16th before taking it again heading into the 18th hole. But, the pair could not hold the lead, allowing D’Angelo and Willig to tie it to force the playoff. The pair finished having shot a 67 to finish with a combined 192.

Cotter added, “It’s just all for a great cause. I love the cause and I couldn’t have asked for a better partner.”