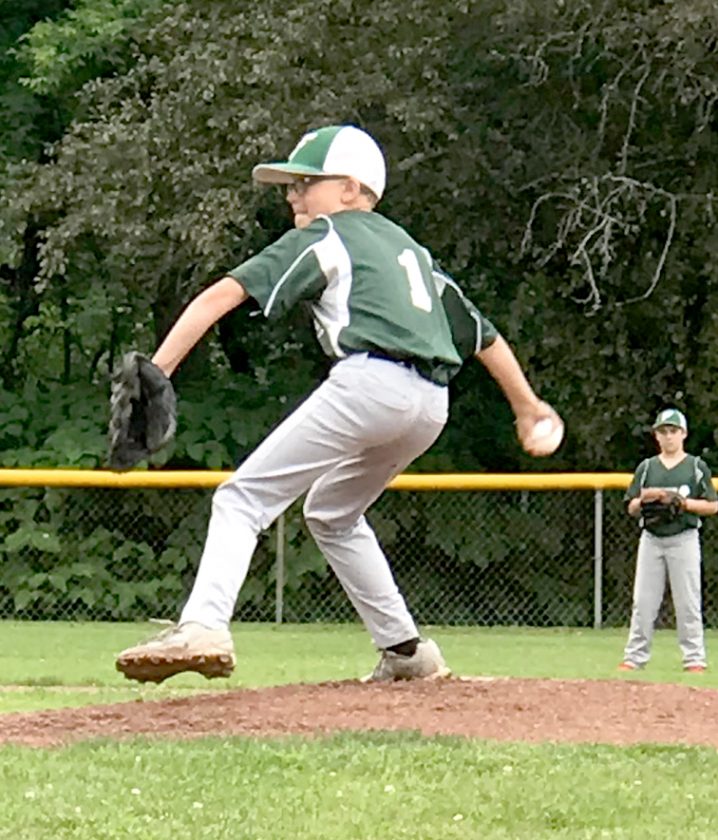 Chase Bianco hurled a complete game allowing four hits and striking out 10 to lead Bloomquist Landscaping of Falconer to a 20-4 win over D&S Glass of Bemus Point.

Cooper Doud smashed four hits including a triple and a double; Jackson Lillie had four hits with two doubles, and Liam Powell added four hits to lead the offense. Parker Norlander has two doubles among his three hits, while Kyler LaRoy contributed two hits with a double. Gabe Delahoy tripled.

Avery Garrett had a double for D&S Glass. 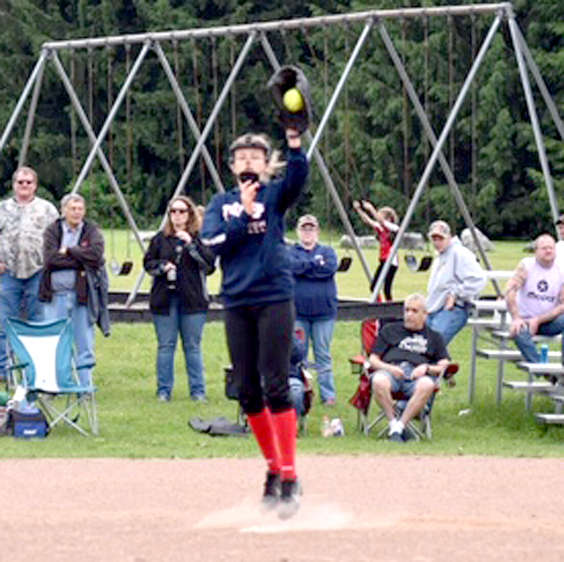 Emma Malmstrom Jouannet catches a fly ball before tagging third base and throwing to Audrina Olson at second base for a triple play. Submitted photo

Emma Malmstrom Jouannet turned a triple play to lead Avery Olson Law Office of Southwestern past Sons of the American Legion of Frewsburg, 23-8.

Ariana Oaks and Sharayah Fuller each doubled to lead Neil’s Propane of Panama past Avery Olson Law Office of Southwestern.

Kait Horton and Ashlynn Weaver stood out on offense to lead Neil’s Propane of Panama past Falconer.

Clarissa Bouge and Kylie Range were the top defensive players for Neil’s Propane.

Mylie Zaranek doubled and Nylah Sharpe also stood out on offense for Falconer. Haley Holmberg and Nana Neal were the top defensive players in the loss.

Lucy Conley went 3 for 3 to lead Peaches and Cream of Randolph past Chautauqua Lake.

Aryanna Sears threw a complete game in the circle for Peaches and Cream.

Eden Ludwig went 2 for 4 and Olivia Chambers stood out defensively for Chautauqua Lake.

Elise Kartesz and Addie Nuccio shined on defense for Spectrum Eyecare while Chloe Johnson and Leia Taylor stood out on offense.

Marlana Cresanti was the top defensive player for Beaver Boys Construction of Southwestern in a win over Heritage of Bemus Point.

Bailey Bishop and Mikaela Luce each had singles for Beaver Boys Construction.

For Heritage, Mady Haglund shined on defense and Savannah Rambacher had two singles on offense.

Kiera Loberg and Hunter Kester stood out on defense for Neil’s Propane.

For Lobb’s Mobil, Mackenzie Lobb and Alayna Devereaux were the offensive standouts while Lily Harvey and Kendall Eckman shined on defense.

Kaylee Melquist went 4 for 4 to lead the Dinner Bell of Frewsburg past Neil’s Propane of Panama, 12-8.

Khloe Duffy was the top defensive player for the Dinner Bell.

Johniel Cintron struck out eight and allowed one hit in 3 1/3 innings on the mound while adding a double at the plate as Lutheran won the championship with a 6-4 win over Lions Club.

Kamryn Monroe and Owen Everetts each had two hits while Jake Grey and Landan Graham added a hit apiece for Lutheran. Julian Jackson also struck out seven in 2 2/3 innings on the mound while adding two hits, including a triple, at the plate.

For Lions Club, Ryan Engquist struck out seven in 3 2/3 innings on the mound while Carter Rizzuto struck out three in 1 1/3 innings. Rizzuto also had an hit and an RBI while Nick Smeraldo chipped in a hit.

The Southern Tier Regulators lost a pair of games in the Slippery Rock Showcase over the weekend before rain washed out action Sunday.

On Friday, Kyler Majka threw six innings, striking out four while allowing four hits, but the Regulators lost to the Keystone Nationals, 3-1.

Adam Goot, Lance Baldensperger, Aaron Hair and Trey Swartz each had a hit for Southern Tier with Swartz driving in a run.

On Saturday, West Hills scored twice in the second inning and once in the fourth to beat the Regulators, 3-1.

Crandall also had two of Southern Tier’s four hits. Baldensperger had a hit and drove in the Regulators’ lone run while Evan Pirtz also singled.

Southern Tier return to action Wednesday with a doubleheader against Full Circuit Power at Diethrick Park. The first game begins at 4 p.m. with the second game to follow. Admission will be $2 and benefit the Regulators.