Thanks For The Memories

Jamestown native Sheldon Battle, seen representing the Chautauqua Striders, won numerous honors for his prowess in the shot and the discus during his high school and college careers. P-J file photo

The 1995 Frewsburg baseball team poses for a photo after claiming the Section VI championship on its way to a New York State Public High School Athletic Association title. Submitted photo 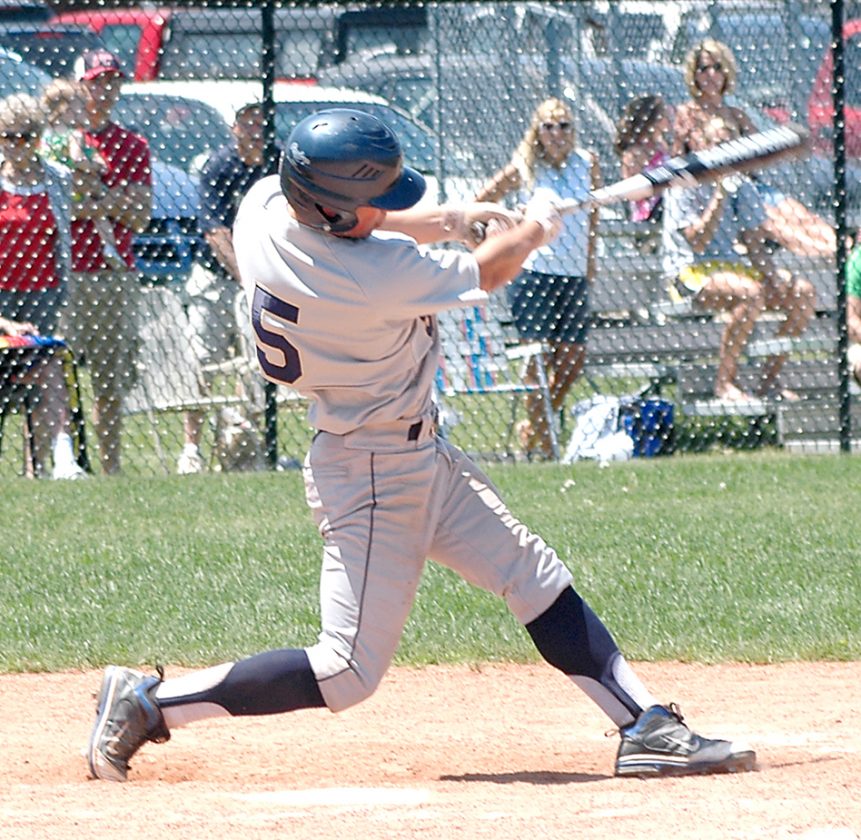 EDITOR’S NOTE: Memorial Day is tomorrow, which means the high school spring sports season is nearing its completion. As The Post-Journal Iooks ahead to the Section VI championships this week, it also can’t help but look back at some of the more memorable moments of springs past. Below, in no particular order, are a few:

The debate had gone on for more than a week, so before I started the grill on Memorial Day 2012, I made a quick trip to Falconer Central School. On Denny Meszaros Field on May 19, 2012, Frewsburg senior Thad Johnson tied the state record for career hits when he blasted a two-run, sixth-inning home run during a nonleague game against the Golden Falcons.

The homer was one of the longest I’d ever seen.

And thanks to a YouTube video courtesy of local sports historian Greg Peterson, I was able to get a rough idea where the ball landed. So, I paced it off. By my unscientific estimates, the ball traveled about 430 feet. 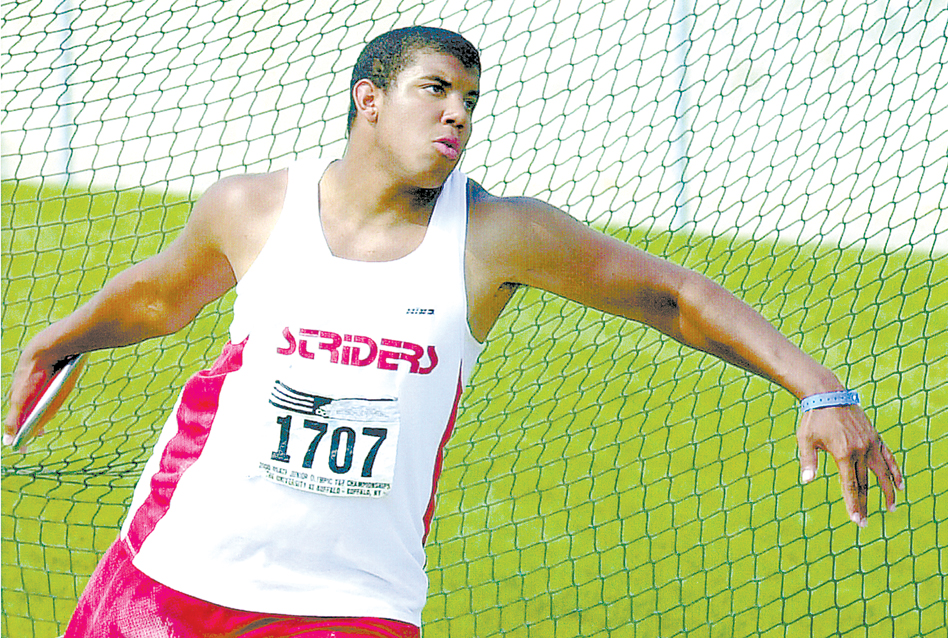 Jamestown native Sheldon Battle, seen representing the Chautauqua Striders, won numerous honors for his prowess in the shot and the discus during his high school and college careers. P-J file photo

I’ve seen plenty of outstanding high school softball games through the years, but the one that stands out most was in June 1997 in the Class C Far West Regional when Section VI-champion Frewsburg took on Wellsville, the owners of a 58-game winning streak.

“The defense played great and Brianne pitched a fabulous game,” Frewsburg coach Jon Blanchard said then. “That’s the best game I’ve seen her pitch. She called her own game and she did a beautiful job.” 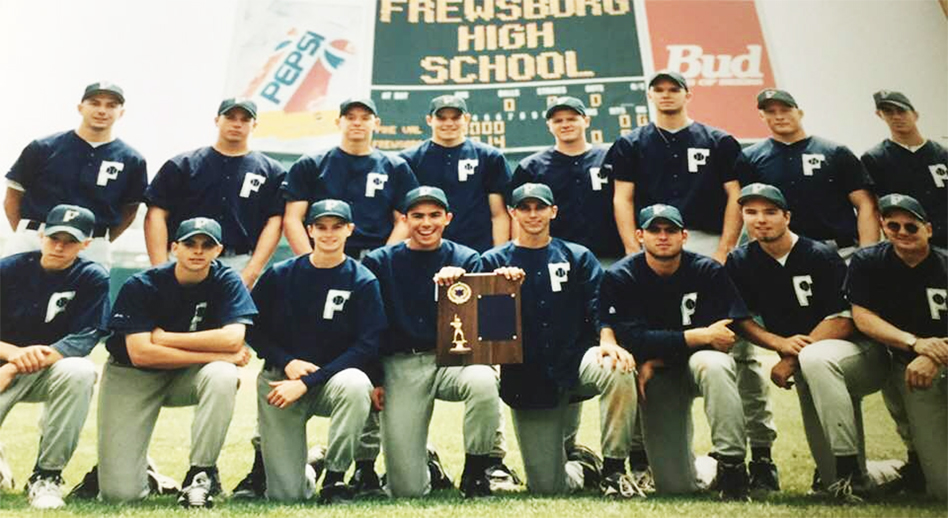 The 1995 Frewsburg baseball team poses for a photo after claiming the Section VI championship on its way to a New York State Public High School Athletic Association title. Submitted photo

In 2000, I sat in the pressbox at P&C Stadium in Syracuse on a brutally hot June Saturday and watched Falconer senior Sam Marra present Denny Meszaros with a state championship in the coach’s final game.

For it was the fiery catcher who provided the shot heard ’round Chautauqua County when he drilled a one-ball, two-strike pitch 375 feet over the left-center field fence for a two-run home run with two outs in the top of the ninth inning to lift the Golden Falcons to a stunning, 5-3, victory over Saratoga Catholic in the New York State Public High School Athletic Association Class C championship game.

“It was meant to be,” an emotional Meszaros said afterward. “You can’t finish any better than this.”

John Moore was the winning pitcher and I remember he and Marra jumping into each other’s arms when the final out was recorded a half-inning later. The photo was the main art in The Post-Journal sports section the next day.

It was a Friday night in June 1995 and Bob Schmitt couldn’t sleep.

There he was staring at the ceiling in a Utica-area hotel, knowing in just a few hours that his team, the Frewsburg Bears, would meet Lake Placid in the New York State Public High School Athletic Association Class D baseball semifinal.

So when morning thankfully arrived — the Bears were scheduled to play at 10 a.m. — Schmitt couldn’t wait to get on the bus and head to the field so that his kids could stretch out and take some batting practice.

“I got down there and I’m the only one on the bus,” he said.

I was one of just a few people who shared those agonizing moments with Schmitt as we waited and waited and waited for his players. Keep in mind, in those days nobody had a cell phone, so Schmitt had no idea where they were and why they were delayed.

In truth, the boys, accompanied by some parents, had just gone for breakfast, but the service at the restaurant was so slow that the team left before a meal was even served. When the players finally returned, Schmitt was quietly seething.

He needn’t have worried.

All the Bears did was bat around in three different innings and went on to wallop Lake Placid, 28-1, to advance to the championship game.

When the victorious team boarded the bus after the rout, Schmitt paused long enough to uncork the most famous six words in the program’s history.

“It must,” he said with a straight face, “have been the breakfast.”

Later that afternoon, Frewsburg built an early lead and held on for an 11-7 victory over Heuvelton to capture its second state title, joining the crew from 1991.

A first-team all-state selection in football in the fall of his senior year, Battle also claimed four state titles (two in the shot and two in the discus) during his track and field season in the spring of 2001. In addition, he earned All-American honors after placing third in the discus (193-3) at the Adidas/Foot Locker Classic, a national meet in Raleigh, N.C., later that spring.

As far as we’re concerned,” said JHS assistant coach Jim Painter in 2001, “he’s the top kid we’ve worked with in the shot and disc. Everybody realized when he was a young kid that he had great potential coming up from the Chautauqua Striders, and he seemed to get better and better.”

When he graduated from Mesa (Ariz.) Community College in 2004, he was a NJCAA Division 1 champion in the shot and the discus, and a second-place finisher in the hammer throw. Two years later, he was an indoor and outdoor All-American at the University of Kansas.

After losing to Windsor in the state finals in 2004, Falconer softball coach Ernie Strickland didn’t waste any time getting his girls ready for a run at the state title again in 2005. Beginning in December, the girls worked on their game, fine-tuned the small-ball philosophy so important at the highest levels and drilled on defense.

Led by Tabatha Stenstrom and Shelby Carlson, the Lady Golden Falcons captured their first state title, highlighted by a 4-0 win over Windsor in the championship game.

“This was a storybook ending,” said Stenstrom, who struck out 281 batters in 182 innings and walked only 11. Along the way, she recorded four no-hitters, one perfect game and 15 shutouts.

Carlson, meanwhile, batted .543, had 51 hits, including seven doubles, six triples and seven home runs, and was the perfect batterymate for Stenstrom behind the plate.