Another Honor For Crist

Chuck Crist will be inducted into the Greater Buffalo Sports Hall of Fame later this year. P-J file photo 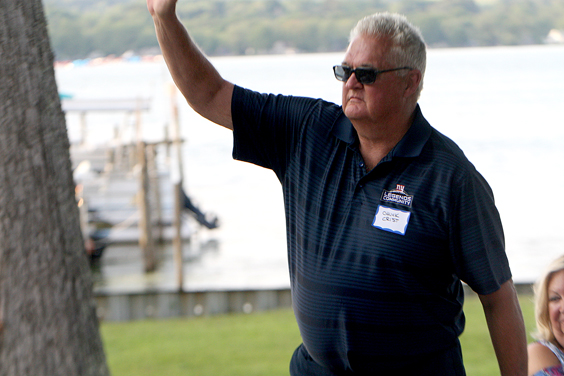 Chuck Crist will be inducted into the Greater Buffalo Sports Hall of Fame later this year. P-J file photo

One of the most decorated athletes Chautauqua and Cattaraugus counties has ever produced will receive another honor this fall.

Chuck Crist, who now lives in Bemus Point, is one of 13 Western New Yorkers who will be inducted into the Greater Buffalo Sports Hall of Fame later this year.

The announcement, which was made earlier this week, will bring his Hall-of-Fame enshrinement to three. Crist, 68, is also a member of the Chautauqua Sports and Cattaraugus County halls of fame. His athletic resume surely makes him a deserving member of each.

During his career at Salamanca High School, Crist earned virtually every honor imaginable, including the team Most Valuable Player in four sports his senior year. Along the way, he was named the Olean Times Herald Football Player of the Year in 1967, and was an All-Southwestern Conference first-team selection. In his junior and senior seasons, the Warriors posted a 15-1-1 record.

In basketball, Crist, who scored 1,004 career points, was the MVP and scoring leader for the Lake Shore League, where he averaged 24.6 points per game his senior year and his team won the 1967-68 Section VI championship over Falconer. Those efforts earned him a berth on the All-Western New York first team.

In track and field, Crist was also the best, setting school records in the high jump and the triple jump. His triple jump mark of 45 feet, 1™ inches still stands. On the baseball diamond, he was a first-team Lake Shore League selection.

Upon his graduation from Salamanca, he signed a letter of intent to attend Penn State University for football and/or basketball. He chose basketball when he and the football coaches couldn’t agree on a position.

In those four years on the hardwood, Crist lettered three times and was the team’s MVP in his senior season (1971-72) when the Nittany Lions went 17-8.

But his love for football, combined with his talent, afforded him an opportunity to sign with the Giants as a free agent in 1972. He played three seasons in New York, followed by three years with the New Orleans Saints (1975-77) before being traded to the San Francisco 49ers in 1978. During his NFL career, he was named the Defensive MVP for the Saints in 1977 after leading the team in interceptions and tackles. He also had 4¢ sacks. In his final pro season with the 49ers, Crist had a team-leading six picks, boosting his career total to 20.

After his professional career was over, Crist continued to show his athletic prowess in fast-pitch softball tournaments and on the golf course — he was a six-time club champion at Holiday Valley Golf Club during the 1990s. For all those accomplishments, Crist was named the southwestern New York “Athlete of the Century” by the Olean Times Herald.

As far as his vocation was concerned, Crist taught and coached at Cattaraugus High School (1983-85), was an adjunct professor at Alfred University (1985-91) where he served as the football team’s defensive coordinator and assistant basketball coach; and held several administrative positions, including high school and, later, elementary school, principal in the Salamanca school district.

A 2003 Cattaraugus County Athletic Hall of Fame inductee, Crist served as coach in a number of youth football and basketball leagues in Bemus Point and Jamestown.

With the 13-member class of 2019, the Greater Buffalo Sports Hall of Fame will now have 343 inductees since its inception in 1991. Of that total, 11 have already been enshrined into the Chautauqua Sports Hall of Fame. They are Bill Bergey, George Carter, Shane Conlan, Howard Ehmke, Wally Huckno, Cindy Miller, Van Miller, Don Reinhoudt, Jenn Suhr and Tara VanderVeer and Cindy Wyatt.

The date of the Greater Buffalo Sports Hall of Fame induction dinner will be announced in the coming weeks, and the Hall of Fame class will be introduced to the public and the media Tuesday, June 4 at 3:30 p.m. in the KeyBank Center foyer in Buffalo.