Falconer/Cassadaga Valley’s Robbie Penhollow is in control of Akron’s Millard Young on his way to a major decision at 195 pounds during the Section VI Division II Championship at Lake Shore Central School on Saturday. P-J photos by Jay Young

Fredonia’s Giovani Russo’s is in control of Austin Bourgeois of Chautauqua Lake/Westfield/Panama in the 132-pound title match. P-J photo by Jay Young 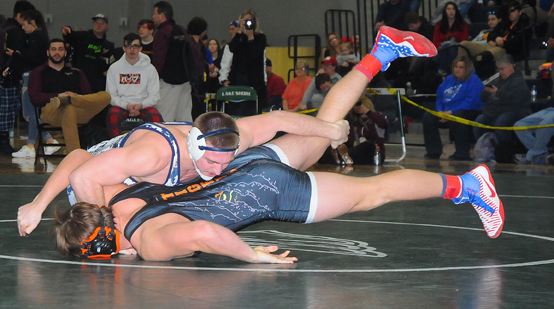 Falconer/Cassadaga Valley’s Robbie Penhollow is in control of Akron’s Millard Young on his way to a major decision at 195 pounds during the Section VI Division II Championship at Lake Shore Central School on Saturday. P-J photos by Jay Young

The Golden Falcons finished first in the team standings with 186 points, while Fredonia took fourth with 136, Chautauqua Lake/Westfield/Panama was fifth with 103, followed by Southwestern (50), Franklinville (39), Maple Grove (37), Randolph (27), Cattaraugus-Little Valley (15.5), Frewsburg (13) and Salamanca (11).

Coach Drew Wilcox’s team was able to place 12 wrestlers in top-six finishes, while all 18 of Falconer/Cassadaga Valley’s grapplers finished inside the top eight. 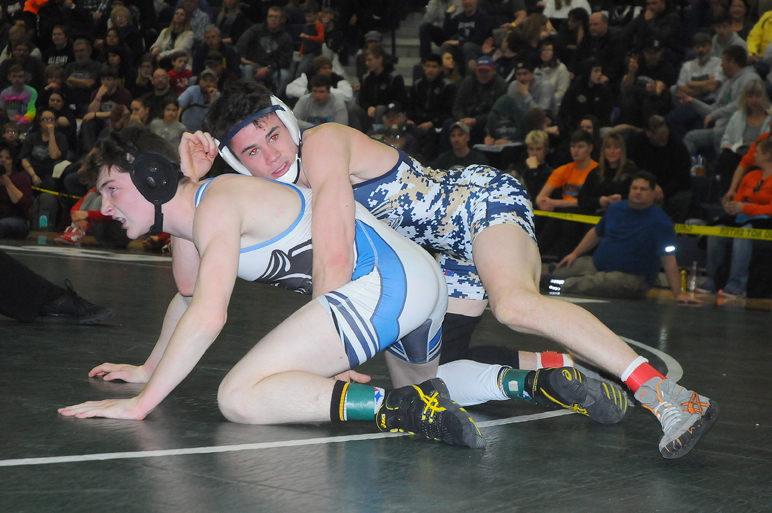 One week removed from a Class C-D win over Young in a similarly dominant fashion, Penhollow improved to 47-1 on the season with his victory Saturday, claiming his second consecutive sectional title after earning a win at 170 pounds last year.

“Now that this finals match is over with, I haven’t really been looking ahead too much, but now that it’s over I’m really excited for states,” said Penhollow. “I’ve got two more times I get to step on that scale and weigh in, and I’m going to make them count.”

While Penhollow will return to Albany this year, it will be Kramer’s first visit to the Times Union Center as a competitor. The senior improved to 50-5 with a win Saturday after being forced to deal with an ACL injury the previous year.

“It was awesome to see Jimmy out there,” said Penhollow. “The past few seasons he’s been through a lot of tough times with injuries, not being healthy. To come in to the postseason and see him healthy and going at his best is nice.”

While Kramer may be on his first visit in pursuit of a state title, he has learned over the years from a host of teammates what to expect from the experience. 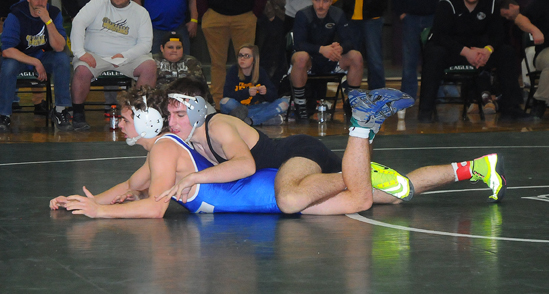 Fredonia’s Giovani Russo’s is in control of Austin Bourgeois of Chautauqua Lake/Westfield/Panama in the 132-pound title match. P-J photo by Jay Young

“I just know the job’s not done yet,” said Kramer at the end of a long day. “I want to get out there and do something. Put a name out there for the state (championships).”

Brayden Newman was also able to make his way to the final match of the day at 99 pounds for the Golden Falcons, where he fell via pin to defending champion Andrew Lucinski of Newfane.

Entering the day with a record of 42-9, Nick Saeger also ended his day in a final for the Golden Falcons, falling to Cory Day of Iroquois in a seven-point decision.

Fredonia will also be sending a pair of grapplers to Albany as Giovani Russo earned an 8-0 major decision win over Austin Bourgeois of Chautauqua Lake/Westfield/Panama to claim the 132-pound title. Teammate Ceric Kristan earned a narrow, 3-1, win over Cleon Lawton of Franklinville at 170.

Kristan was able to earn his first point of the match with an escape after beginning the second period in the down position. After what was almost an entirely defensive battle, the sophomore finished off a takedown in the closing seconds to conclude what was a one-point match for the better part of six minutes.

“As a sophomore at 170 pounds that is pretty extraordinary,” Fredonia coach Joe Santilli said of Kristan’s win. “I’m excited for him, I’m glad he was able to finish that particular match and find a way to grind it out. … He has worked hard and I know he spends a lot of time in the offseason. He took sixth as an eighth-grader, sixth as a ninth-grader. He’s a tough kid and he is getting better and better.”

Also earning a spot in the finals for the Hillbillies was Dalton Gardner, ultimately suffering a last-second defeat at the hands of Zach Braddell of Tonawanda at 138 pounds.

Jake Skinner of Fredonia also earned a trip to the championship round at 220 pounds, falling to Michael Rigerman of Pioneer via pin in 2:34.

“I believe we placed eight in the top six which is the most I have been a part of in my tenure as head coach. So that is pretty exciting.” said Santilli. “Four finalists … that’s pretty excellent.”

In the 182-pound final, Jason Frazer of Tonawanda was able to earn a 15-5 major decision win over Jake Tomlinson of Maple Grove.

Luke Tomlinson also finished off his day well for the Red Dragons, taking third place at 120 with a 6-1 win over Blake Colantino of Eden.

In the last final of the day, at 285 pounds, Ben Szymanowski of Chautauqua Lake/Panama/Westfield was locked in a tight battle with Jaden Heers of Newfane.

Heers made the most of his opening in the closing seconds of the second period, sealing up a pin with two seconds remaining.

“Benji, he beat a very tough kid, beat the No. 1 seed in the semis,” said Szymanowski’s coach Ken Rowe, “and was just having a good match in the finals and got caught. He is a kid who is just over 200 pounds and he’s wrestling legit 285 guys. For him to battle like he did, I was very pleased with him.”

Both Szymanowski and Bourgeious will wait until mid-week in the hopes of earning at-large bids to Albany, as will their teammate, Derek Ecklund, who was a third-place winner at 145.

Rowe’s team finished with a pair of third-place patches, as Brendon Ramsey was able to finish off Jake Vergien of Iroquois at 132 pounds.

Falconer/Cassadaga Valley led the way with a trio of third-place finishers, including Bryce Baglia at 170, Hudson Johnson at 182, and Collin Beichner at 220 after his wino over Jacob Zachar of Randolph.

Leading Southwestern on the day was Dontae Hoose with a third-place finish at 195 pounds, while Dagon Bryant took fourth at 138.

LOCKPORT — Leading the Jamestown Red Raiders at the Section VI Division I Championship at Starpoint Central School was Dwayne Hannold.

Hannold took fourth at 145 pounds, losing a battle to Quinten Burk of Clarence, 8-3. 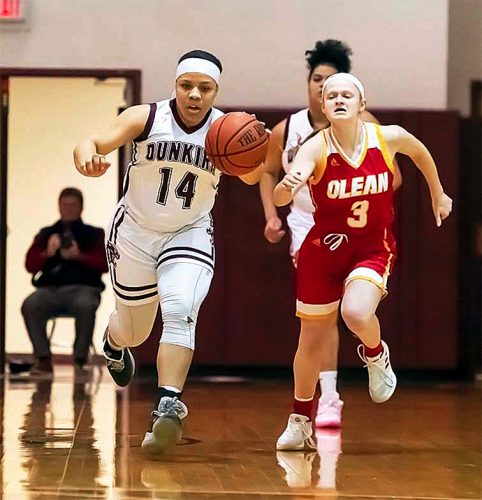