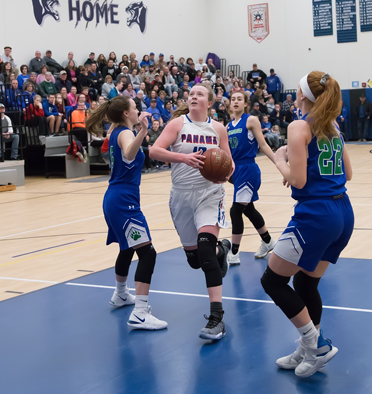 Angeletti was a manager for the Panthers’ girls basketball team as Lenart etched her name in the program’s record books throughout her illustrious career, finishing with 1,259 points.

Now Angeletti will be a role model to many more up-and-coming Panama girls.

The Panthers junior scored 14 points and in the process surpassed Lenart’s career mark as the Panthers rolled to a 67-18 Chautauqua-Cattaraugus Athletic Association Division 2 West victory over Westfield/Brocton on Friday evening.

“We’ll look back at it 10 years down the road and see those accomplishments,” said Panama head coach and Natalie’s father, Jeff. “Just taking it all in, it’s surreal. As a junior, to be able to surpass that goal and get the school record, is really kind of cool.” 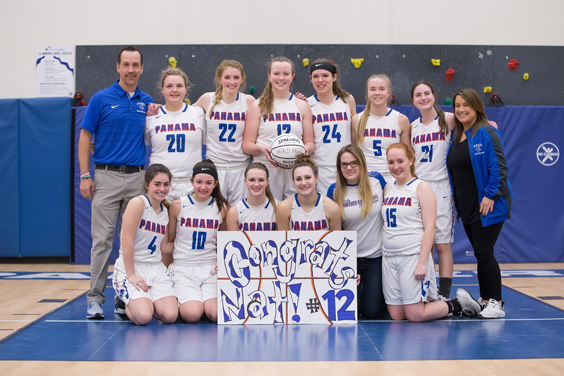 Natalie Angeletti, back center with ball, poses for a celebratory photo after setting the Panthers’ career record for scoring during their CCAA Division 2 West game against Westfield/Brocton on Friday evening in Panama. Photos by Debbra Bailey

As a seventh-grader, Natalie was called up to the varsity team for a playoff run that ended in the New York State Public High School Athletic Association Class D semifinals with a 57-39 loss to Section X Heuvelton — Lenart’s last game in the blue and white.

Since scoring 25 points that spring, Natalie has been a model of consistency for Panama, scoring 299 points as an eighth-grader, 396 as a freshman and 349 as a sophomore. This season she is up to 200 points through the Panthers’ first 14 games, 13 of which have been wins.

Needing just 5 points to break the record after last Wednesday’s 69-47 victory over nonleague Frontier, Natalie would’ve likely set the mark last Saturday afternoon at home against Lancaster, but the game was postponed. Ironically, it wasn’t until after the Frontier game that Jeff even knew his daughter was close to breaking the record.

“For myself, statistics are always about turnovers, assists and rebounds. … Points and things like that, I always have to look,” Jeff said. “I had to look at the ball about two weeks ago to see what Brit had. Something told me in my gut to tally it right after the Frontier game. She could’ve broken it in the Frontier game and I wouldn’t have known it.”

Mother Nature then did the Panthers a favor when she brought a polar vortex to Western New York earlier this week, meaning Tuesday’s road date with Cassadaga Valley in Sinclairville was postponed, giving Natalie another opportunity to reach the milestone at home in front of the Panama faithful.

“We were expecting it to happen at Cassadaga Valley last week,” fellow junior Kylie Schnars said. “It was a whole week of keeping this a secret. That was the worst. I am so glad that it happened here.”

“To see this all work out, it’s all in the good Lord’s plan,” Jeff added. “It was meant to be tonight.”

The 6-foot forward made quick work of the record Friday, hitting a pair of free throws on her team’s third possession and scoring on a putback a little while later to tie the mark.

Schnars then missed a runner in the lane, but the rebound was tipped out to Maci Johnson, who found Natalie open at the free throw line. She then took one dribble with her right hand before stepping into a scoop left-hand layup that she banked off the glass for one of the more memorable buckets of her career.

“I am so proud of her. I am very thankful that I have gotten to play with her for so many years — ever since we were playing Upwards,” Schnars said. “She is such an amazing player and I’m so proud of the person she has become.”

“She doesn’t care about all the points,” senior Abi Lisciandro added. “She’s unselfish when she needs to be. It’s so great to play with a great talent like her.”

The game was stopped to mark the occasion, and even Lenart was pulled into the celebration on a video phone call from Elmira where the Houghton College senior had just finished scoring a game-high 23 points in the Highlanders’ 66-59 victory over Elmira College.

“She has pretty much dedicated herself to basketball. The person that she just took the record from, Brit, was the same way. That’s why she wears No. 12,” Jeff said. “We all got a little emotional because Brit was on the phone. … It’s forever Brit’s record. She’s the one who put us on the map. She’s the one who got us to where we are at.”

“I just feel really blessed, especially coming after Brit because she’s my role model,” Natalie Angeletti added. “It was crazy. Knowing what she had been through and what type of player she was, I was so thankful to be able to play with her and follow in her footsteps.”

Angeletti still has a minimum of seven and as many as 12 games to build on her record this year before another 20-plus games her senior year. A small uptick in her career scoring average could see her approach the 2,000-point milestone before all is said and done.

“Two-thousand is out there, but I just want to know I worked as hard as I can,” Natalie said.

“At this point … it doesn’t matter,” Jeff added, “as long as we get to that state championship game and we are putting rings on our fingers.”

NOTES: Panama was leading 12-0 when Angeletti set the record Friday and led 25-5 after the first quarter. … Schnars led the Panthers with 17 points; Angeletti and Schnars each had 10 rebounds while Alexys Marsh had nine; Lisciandro had four assists and six steals; and Angeletti had five steals. … Sophia DeMarco, who surpassed the 1,000-point milestone in her last game, led Westfield/Brocton with 10 points. … The Wolverines turned the ball over 33 times and shot 5 of 33 from the field. … Panama won the jayvee game, 30-21, behind Maddie Lisciandro’s 17 points. Haleigh Dellow scored 8 for Westfield/Brocton.