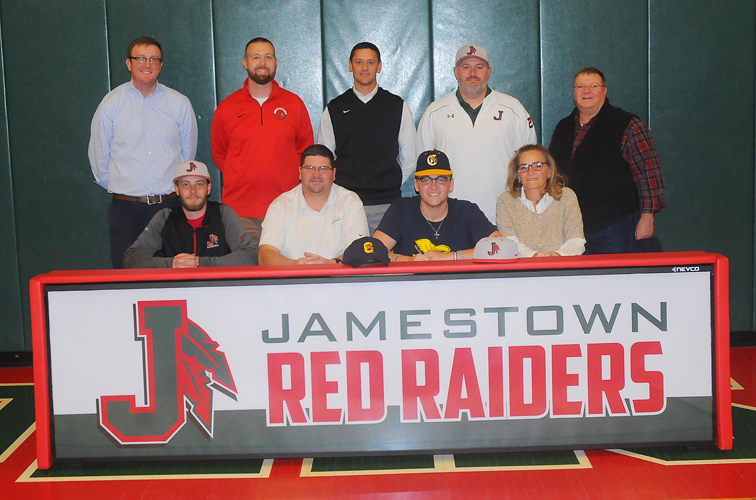 The photo opportunity at McElrath Gymnasium completed, Bryce Jackson rose from his seat behind a brand-new Jamestown High School scorer’s table that had been rolled out to one end of the basketball court. As he made his way around to the front, he was greeted by his older brother, Gannon.

The siblings shared a long embrace and spoke quietly amongst themselves.

It was a special moment. Wednesday was a special day for countless high school student/athletes across the country. National letter of intent signing days always are.

At JHS, it was made even more significant as two seniors — Jackson, a pitcher on the Red Raiders’ baseball team, and Allie Stockwell, a swimmer on the girls swim team — confirmed their commitments to Canisius College and the University at Buffalo, respectively, by signing on the dotted line.

And when you add 2017 JHS graduate James Rojas, a sophomore basketball player at Hutchinson (Kansas) Community College, to the mix — he’s also bound for UB — yesterday was a banner day for the Red & Green. 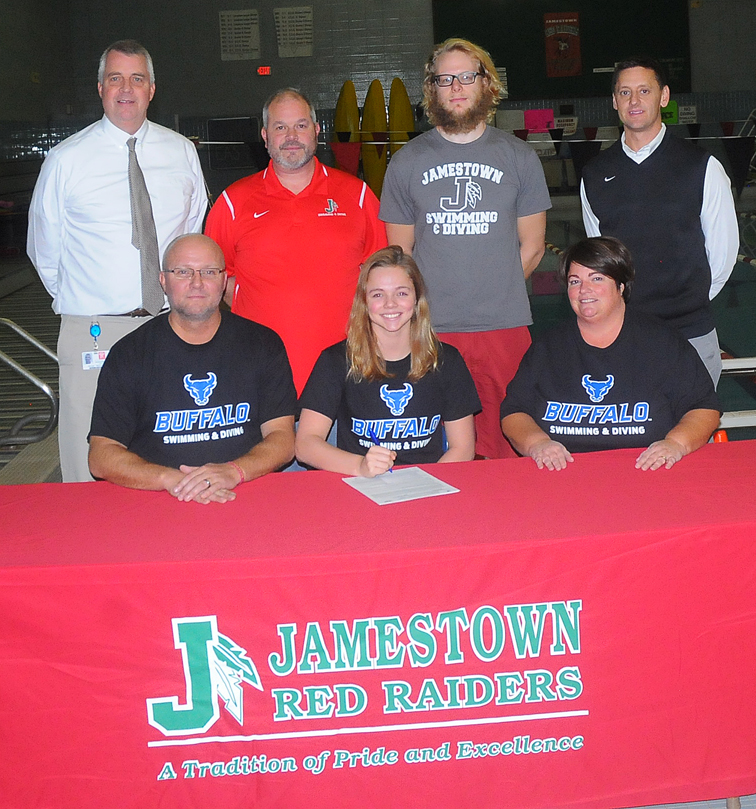 “I’m really happy for all three of them, because all of them have worked extremely hard to get to this point. That’s really quite an accomplishment,” JHS athletic director and boys basketball coach Ben Drake said. “Just to be able to play at the college level, let alone get to a point where you can get a scholarship at the Division I level is pretty special.”

Jackson, an Erie County Interscholastic Conference Division I first-team all-star and a Post-Journal all-star last season, posted a 5-5 record with a 3.92 earned run average while striking out 56 in 50 innings pitched. The son of Joe and Theresa, Jackson may have saved his best performances in 2018 for the summer when he was one of the top hurlers during the Babe Ruth 16-18 World Series at Diethrick Park.

Jackson’s coach at Canisius will be Silver Creek native Matt Mazurek, who is entering his second season as the head coach of the Golden Griffin baseball team and 16th season overall with the program.

In his first season at the helm, Mazurek led Canisius to the 2018 MAAC Championship, seeing the Blue & Gold advance to the NCAA Regional hosted by Minnesota. It was his third conference title as part of the Canisius coaching staff, serving as an assistant coach for the 2013 and 2015 MAAC Championship teams.

“He was really convincing and he made everything very appealing,” Jackson said of Mazurek. “He made me feel like I was at home. He went on and on about the success of their baseball program, and that just really hit me. 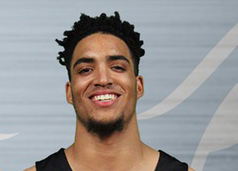 “My hopes are that I can go in and compete right away and make an impact.”

“I really loved the girls,” said Stockwell of her reason for choosing UB over Towson and Cleveland State. “They’re more like family. I saw how they interacted and how they took care of each other.”

Rojas, a 6-foot-7 forward, has led the Blue Dragons to a 5-0 start, averaging 18 points and 4.8 rebounds per game, while shooting 59 percent from the floor, including 36 percent from the arc, and 87.5 percent from the foul line. In Saturday’s 117-85 victory over Redlands CC, Rojas scored 28 points (on 10 of 14 shooting) and grabbed six rebounds.

When he arrives at UB, which is currently ranked No. 25 in the country, he’ll be reunited with Bulls’ assistant coach and recruiting coordinator Bryan Hodgson, also a Jamestown native and JHS graduate.

“We’re excited,” Hodgson said Wednesday night. “I knew he was special from the first time that (Ben Drake) asked me to watch him. He’s gotten better every year. They think he has a chance to be Player of the Year in (Hutchinson CC’s) region this year, which is in the top two or three in all of junior college basketball.”

Last season, Rojas helped lead Hutchinson to a 29-7 record and a 21-5 mark in conference play, averaging 10.6 points per game. As a Red Raider, Rojas was a two-time Post-Journal Player of the Year and a 2017 All-Western New York first-team selection. As a senior, he averaged 27.1 points, 11 rebounds and 3.5 assists per game.

“We are extremely excited to get James back to Western New York,” said UB head coach Nate Oats in a statement on the school’s website. “He is a player we have targeted for a long time and he brings a toughness to the gym every time he steps on the floor. He can shoot the ball well and he is smart on both sides of the ball.”