Clymer/Sherman/Panama’s Derek Ecklund runs with one of his six carries during the Wolfpack’s 46-6 win over Portville on Saturday afternoon at Jack Keeney Community Field in Panama. P-J photos by Scott Kindberg

Clymer/Sherman/Panama’s Garrett Fransen holds up the ball after recovering a fumble during the first quarter Saturday. 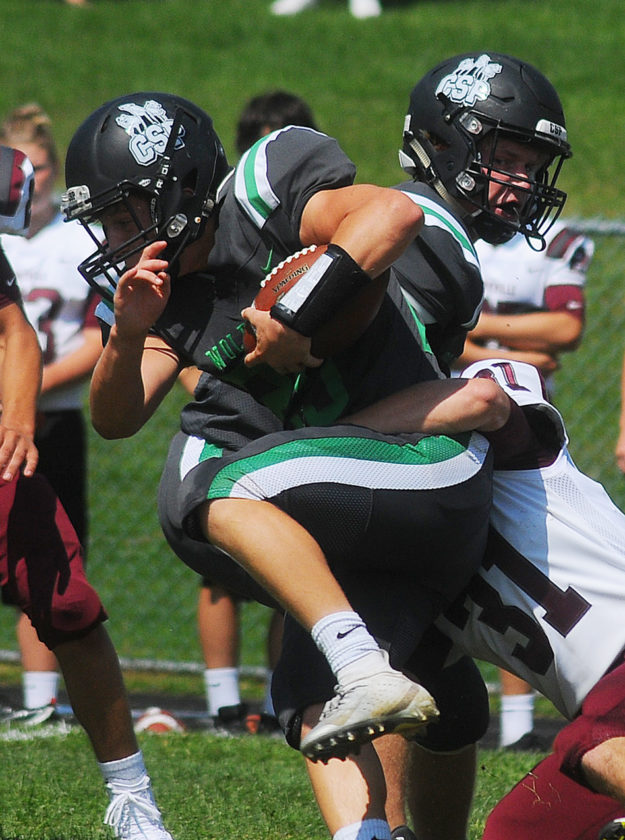 Clymer/Sherman/Panama’s Derek Ecklund runs with one of his six carries during the Wolfpack’s 46-6 win over Portville on Saturday afternoon at Jack Keeney Community Field in Panama. P-J photos by Scott Kindberg

Three-hundred and sixty-seven rushing yards later, the Wolfpack made a loud statement with a 46-6 win over non-league Portville at Panama’s Jack Keeney Community Field.

“We thought that we had a pretty good team coming back this year,” Clymer/Sherman/Panama head coach Ty Harper said. “The guys came out and performed today. I’m pretty happy about it.”

Next up for the Wolfpack is a showdown with the Red Dragons on Dutch Hollow Road.

If Saturday’s performance was any indication, Harper’s team will be up to the challenge. 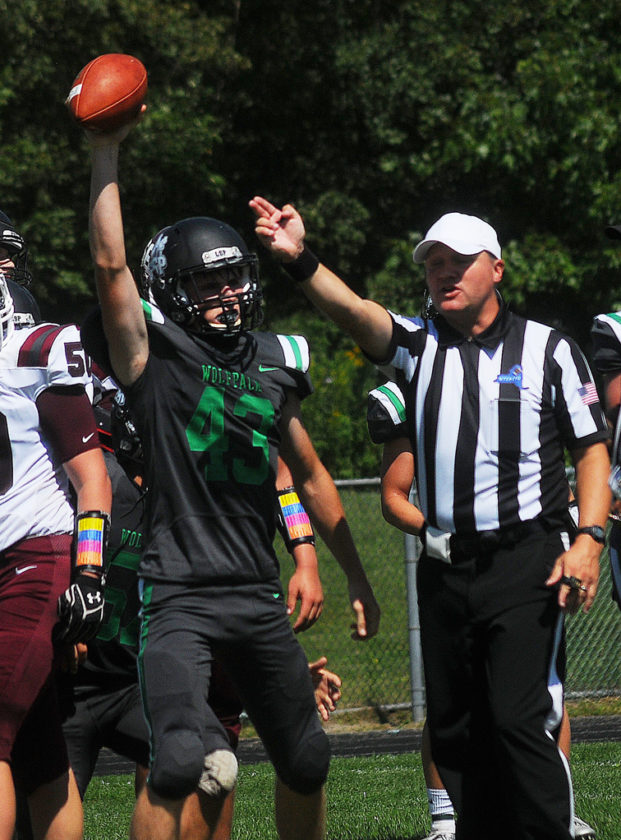 Clymer/Sherman/Panama’s Garrett Fransen holds up the ball after recovering a fumble during the first quarter Saturday.

Clymer/Sherman/Panama (1-0) scored on its first three drives of the game and didn’t punt until the 7:21 mark of the second quarter. The Wolfpack also took advantage of a fumble and a shortened field late in the first half to go up 26-0 at halftime.

“We knew the counter and the trap would be coming. They did a really good job of blocking it and we did a poor job of recognizing it on the field,” Portville first-year coach Josh Brooks said. “One missed tackle or two and it’s a touchdown.”

Derek Ecklund was the story early for the Wolfpack. After Mike Beatman went 13 yards and an incompletion on the first two offensive plays of the game, Ecklund carried the next three plays, converting a third-and-8 before scampering 40 yards for a touchdown just 1:16 into the game for a 6-0 lead.

“He’s a pretty special player. He’s a very unselfish kid. He split the carries last year with Tanner Ramsey and he never complained once,” Harper said of Ecklund. “We expect a big year from him this year.”

Portville put together a 10-play drive to get down to the Clymer/Sherman/Panama 35-yard line, but a fumble on third-and-1 was recovered by Wolfpack senior Garrett Fransen, giving the ball back to the hosts with 6:28 left in the first quarter. 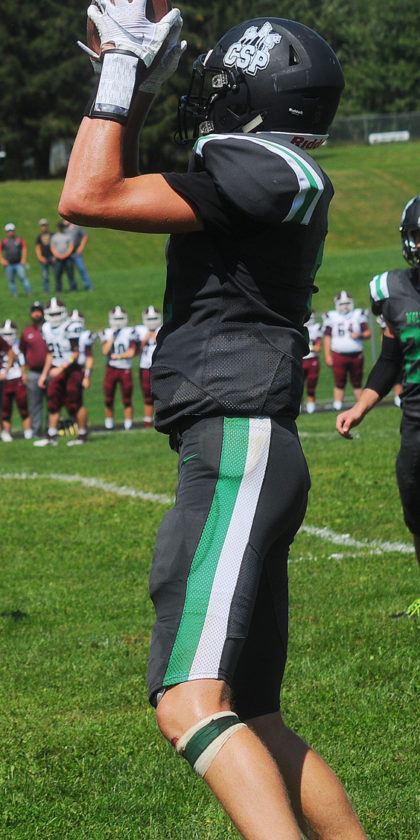 Ecklund wasted no time converting the turnover into points, rumbling 65 yards on the first offensive play to give his team a 12-0 lead. The senior running back was visually affected by the heat and remained on the sideline for the remainder of the first half.

With Ecklund sidelined, it was Beatman’s turn to carry the load for Clymer/Sherman/Panama. The senior picked up a first down with a 15-yard run to the Panthers’ 24-yard line before the Wolfpack ran into a fourth-and-3 from the 18-yard line.

Gerrit Hinsdale came through with a 17-yard completion to Cameron Barmore down to the 1-yard line before Beatman capped the drive with a 1-yard plunge to give his team a 19-0 lead after Garrett McClelland’s point-after kick with 2:30 still left in the first quarter.

“We’ve got some pretty talented backs. Both Derek Ecklund and Michael Beatman are returning running backs for us,” Harper said. “We felt pretty confident putting the ball in their hands. The offensive line did a great job too.” 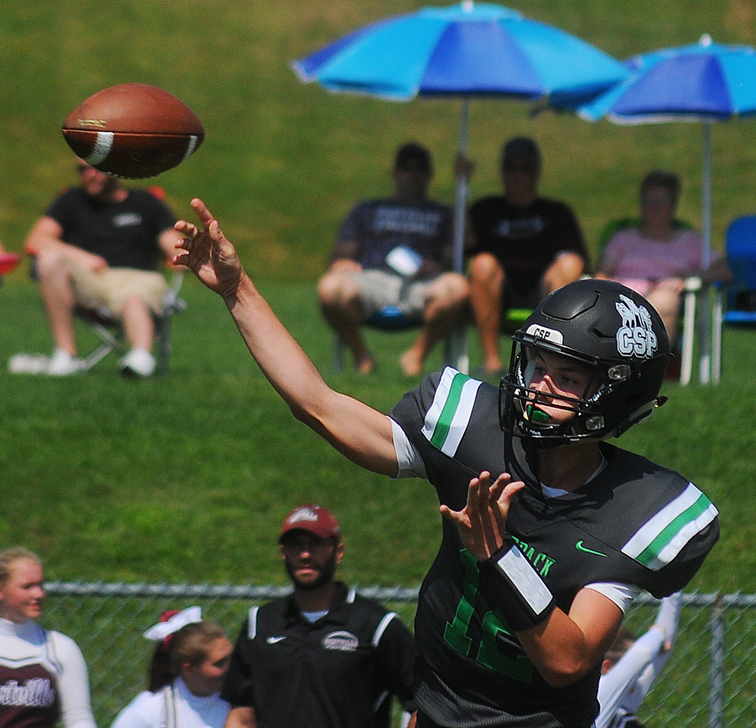 Robert Overton recovered a Portville fumble with 5:35 left in the first half to set up Clymer/Sherman/Panama’s fourth score, a Mitch Hovey 5-yard run to make it 26-0 after another McClelland PAT.

Senior Steven Ryan recovered Portville’s third fumble of the game and Hinsdale hit Barmore on a quick slant that turned into a 33-yard touchdown and a 33-0 lead after another McClelland PAT just 49 seconds into the second half.

“It is nice having a returning quarterback who is a pretty good film study,” Harper said. “Cameron is obviously a pretty special player too.”

The Panthers ruined the shutout with a 13-play, 45-yard drive that was helped by a roughing-the-passer penalty on fourth down and capped by a 9-yard Mike Stillman-to-Brandon Murray touchdown reception with 5:54 left in the third quarter.

“We’ve won one game the last two years. We are kind of starting over. We’re trying to build this back up and this was a start,” Brooks said. “The kids’ effort in the offseason was there. It was nice to see that, but we want to see it start to translate on to the football field.”

Beatman added a 29-yard touchdown run and Hovey scored from 6 yards out before the end of the third quarter as the Wolfpack coasted to victory.

“We just played a very, very good football team of three combined districts,” Brooks said. “They are going to make a heck of a run this year.”

Next up for Harper’s crew is a Friday night meeting with Maple Grove. Last season, the Red Dragons won both meetings with a 28-14 win at Clymer in late September before a 26-20 sectional semifinal victory on Dutch Hollow Road in late October.

“We are excited to go and play Maple Grove,” Harper said. “People have been asking a lot about Maple Grove all offseason and now we can focus on that.”

NOTES: Ecklund ran just six times for 143 yards while Beatman had eight carries for 76 yards. … Hinsdale was 5 of 11 for 67 yards with Barmore catching three of the passes for 61 yards. … Ryan and Beatman had eight tackles apiece while Ecklund and Jordan Smouse each had seven. … Roland Thompson led Portville (0-1) with 17 carries for 38 yards.