They call it “madness” for a reason.

After a quick weekend at home, I was on my way back to Olean on Sunday to work a Selection Show watch party at the Reilly Center.

A lot was up in the air on Sunday for the St. Bonaventure Bonnies — they had been defeated by the Davidson Wildcats in the Atlantic 10 Championship semifinals in Washington, D.C; Vermont, viewed as a quality win for the Bonnies in their NCAA tournament hopes, was defeated on a buzzer-beater in the America East Championship game; and, the Wildcats were, at the time of my commute from Jamestown, looking to seal their Cinderella dream of making the NCAA tournament with a Atlantic 10 Championship victory over Rhode Island.

Seeing as speculation rules the days immediately prior to Selection Sunday, there were many predictions as to where the Bonnies would ultimately end up — A 10 seed? A 9 seed? A First Four play-in game? Charlotte? Pittsburgh? Nashville?

Tensions were high in the Reilly Center and none of us had any idea how this would unfold. 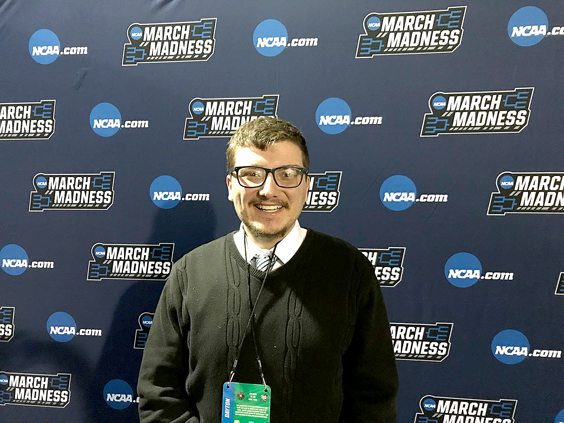 I’ve heard the words “St. Bonaventure” nearly a million times in my life — but, never had I been more pleased to hear those two sweet words than I was after Greg Gumble uttered them during the Selection Show on TBS.

And, then, slight disappointment.

The Bonnies had been placed into the “First Four” in Dayton and were set for a date with UCLA on Tuesday night at 9:10. If they win? Neither of the sites above, but rather, Dallas.

I hadn’t planned on going.

I wasn’t sure of a way I could get there and wasn’t sure I would be able to obtain a credential. I really didn’t know if this would be possible to put together in 24 hours.

Tip: Never underestimate the lengths to which people will go during the month of March — especially over basketball.

After confirming I’d have a ride to Dayton with Post-Journal sports editor Scott Kindberg, and after a green light from Bonaventure Director of Athletic Communications, Scott Eddy, I received a credential for the First Four.

After a Monday that felt like three days, I came back to my dorm and immediately tried to put this all together — clothes, hotel, driving home, checking on missed classes.

Among the items in my suitcase included two personal good luck charms given to me by my grandmother after the passing of my grandfather, Joe Mistretta, in January 2015 — his tie from my brother John’s wedding and the ring bestowed upon Papa and my great-grandmother in 1987 for the posthumous induction of my great-grandfather, Morris Mistretta, into the Chautauqua Sports Hall of Fame.

The significance? Well, Morrie, as he was called, and I share the same birthday. And, as for Papa? Well, he was the biggest Bonaventure fan I knew, and to have a piece of him with me on Tuesday night was something I felt was important.

Joe Mistretta knew basketball and knew the Bonnies well. He’d often make the commute to Olean during the winter months and certainly, years later, living right around the corner from Julie and Larry Weise in a Florida retirement village didn’t hurt either. Not to mention, Papa’s best friend, Carl Saglimben, played at Bona in the 1950s and is one of the many reasons I eventually picked the school.

Nearly five hours later, we checked into our hotel room in Springfield, Ohio, took a quick nap, and then were back on the road to Dayton to make it just in time for the first of two games that evening — LIU-Brooklyn vs. Radford.

Scott and I made our way into the media room at UD Arena — an unbelievable facility that was incredibly welcoming — and met up with several student media friends of mine: Joe Ceraulo, Josh Svetz and Sean Lynch.

Suddenly, while sitting there, Scott received an email.

“Do you want to meet Hal McCoy?” he said to me.

For those who aren’t familiar, Hal McCoy is the Hall of Fame sports writer who has covered the Cincinnati Reds for The Dayton Daily News since 1973. He coined the phrase “The Big Red Machine,” and has covered everything from the ownership of Marge Schott, the Reds’ 1990 World Championship, and the return of Ken Griffey Jr. to the Queen City.

In 2003, McCoy gained national attention when he suffered a stroke to his left eye, leaving him legally blind. He often writes about his challenges on his blog, “The Real McCoy.”

To the Jamestown community, however, McCoy is known as the gentleman who recently befriended Scott and has been an ardent cheerleader for our colleague, Cody Crandall, who awaits a heart transplant and has used his condition to become an advocate for organ donation.

After having the chance to finally meet him, Scott perhaps put it best: “Hal McCoy is not only a Hall-of-Fame sportswriter. He’s a Hall-of-Fame person.”

Finally, we found our seats on press row, sitting just behind and just to the left of the TruTV broadcast team of Len Elmore and Jimmy Jackson.

Courtney Stockard was masterful and the Bona defense put together arguably its finest performance of the year en route to a 65-58 victory over the perennial powerhouse that they should have played in the 1970 NCAA championship game.

I know my friend Larry Weise, the legendary coach of that team, had to have been smiling from ear-to-ear.

On to Dallas and a rematch from last season with the Florida Gators.

Not for me. My road ended in Dayton … or so I thought.

While en route home on Wednesday afternoon, I received a message from my good friend, Chris Olsen, who is a self-proclaimed “Jamestown-aholic” who now resides in California.

“You need to go to Dallas. Start looking at flights.”

Like I said, don’t underestimate the lengths to which people will go during the month of March.

Two hours at a Quaker Steak and Lube on the outskirts of Cleveland and with many thanks to Scott, Chris, my parents, the generous alumni of St. Bonaventure University whose donations have secured funding for student media attending the matchup in Dayton, and the hospitality of a few mutual friends who reside in Dallas, my road will not stop at the University of Dayton Arena.

My road, instead, continues to American Airlines Arena.

Like I said, this month is coined as “madness” for a reason.

And, it certainly isn’t going to cease anytime soon.