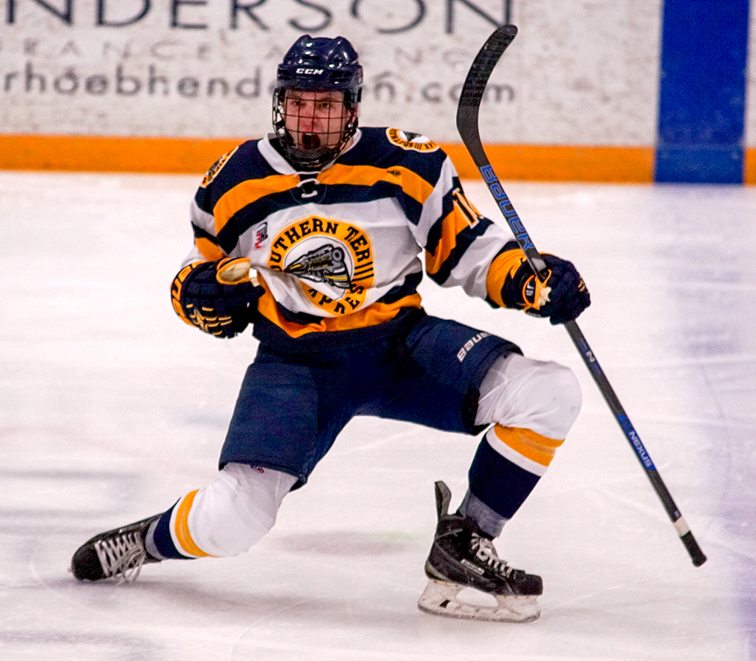 Right around the midway point of the third period of play Friday night, Southern Tier’s Nick Wilcox — fresh off an assist on the fourth Xpress goal — found himself tangled up with Wooster’s Dennis Lekarev near center ice.

Five seconds and three towering overhands later it was the Xpress forward who stood victorious, raising his arms much to the delight of the Northwest Arena crowd, placing the cherry on top of what would eventually be a 5-2 Xpress win in the North American Tier III Hockey League.

The victory improved Southern Tier to 15-21-0 on the year and marked a strong debut performance for new acquisitions Christian Juliana and Austin Zimmerman.

“We’ve been making some changes here. Tonight was the first game for Christian Juliana and for Austin Zimmerman. Both were deals that (general manager Travis Sanders) was able to work out with a couple of moves that we made,” Xpress head coach Lou Santini said.

Juliana would end his night as the first star after notching his first goal for the Xpress with a slapshot from the sidewall in the just the fourth minute of play, while also assisting on Hunter Kepple’s fifth and final goal. 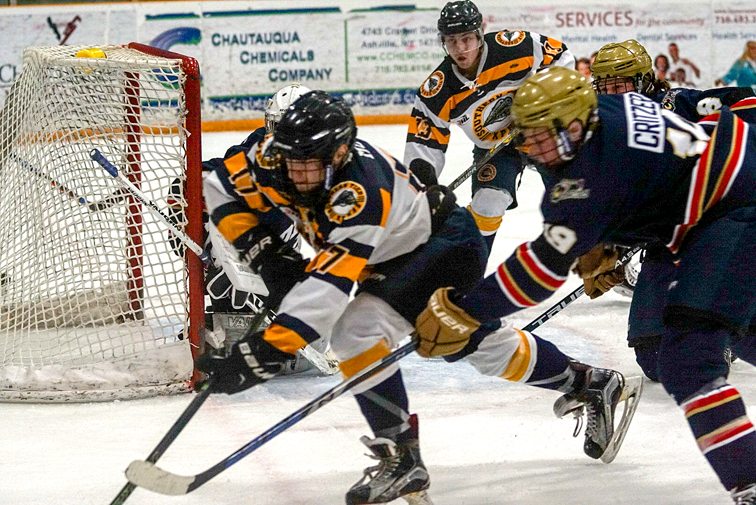 “A lot of these acquisitions were through trades. Some people may have noticed that (former captain) Ty Rickabaugh was not on the ice. He was dealt to Pittsburgh and then we got Zimmerman in return, and Christian we brought in.”

Southern Tier has also recently added Chris Crowley — formerly of Roc City — to its roster as well as Hunter Kepple, who spent last year with the Xpress before being moved.

Crowley was able to aid Southern Tier to its hot start, chipping a pass back to his point to assist on Juliana’s opening goal while Kepple was able to notch the final tally of the night.

It was Juliana and Tristan Mock that were able to set Kepple up for an open look in the slot, where the Freeport, Pennsylvania native delivered a quick release over the shoulder of Oilers goalkeeper Justyn Gillis.

“It was a good win for us. Our guys know that Wooster is a tough team and you have to be ready to play against them,” Santini said. “They play hard all the way through three periods.”

While new faces were a big part of Southern Tier’s success Friday, familiar skaters were just as sharp as the line of Joey Gerace, Stuart Pearson and Michael Lamison continued to show strong play, combining for three assists and a goal.

During the first minute of play in the middle period, it was Gerace who tossed a shot to the front of the net from the point, allowing Pearson to pick up an open backdoor rebound to make it 2-0.

Gerace’s second assist of the night would come on a slapshot from the point that was fired home by Nic Allen with Lamison grabbing the secondary helper on that third Southern Tier goal.

“They are all three hard-working players, they all do their job out there that they need to do,” Santini said. “They are good people in the community, good people on and off the ice. It’s just something that has clicked for them.”

Santini’s team will also carry defensive momentum into tonight’s 7 p.m. rematch against the Oilers. Goaltender Ryan Pascarella was able to come away with 29 saves in the win, thanks in large part to open shooting lanes that were cleared out by his defenseman.

“The boys in front of me were playing really well and allowing me to see the puck well. They just cleared guys out in front and gave me a good lane to see the puck,” Pascarella said. “All the credit in the world goes to my defense and my forwards for giving me those lanes.”

In addition to the help up front, Southern Tier’s netminder also did himself a few favors, including back-to-back sprawling stops on Jeffrey Dawson and Shane Malinak in quick succession to maintain a 2-0 lead early in the second period.

“It becomes muscle memory,” Pascarella said. “You work on that all week in practice and you focus on getting your body in the right position to even be able to make the save, and then it’s second nature.”

In addition to tonight’s game, Southern Tier will host the Oilers again at 2 p.m. on Sunday, looking to close a nine-point gap in the standings with Wooster as they gear up for a second-half push.

NOTES: Mock earned Southern Tier’s fourth goal of the night with assists coming from Wilcox and Jacob Zwieg. … Gillis finished the night with 34 saves on 39 shots while Daniel Critzer and Matthew Kesto picked up goals for the Oilers.