Jammers Ben Brookover (30) and Chris Stefl (25) race to join a celebration after the game-winning hit. P-J photos by Matt Spielman 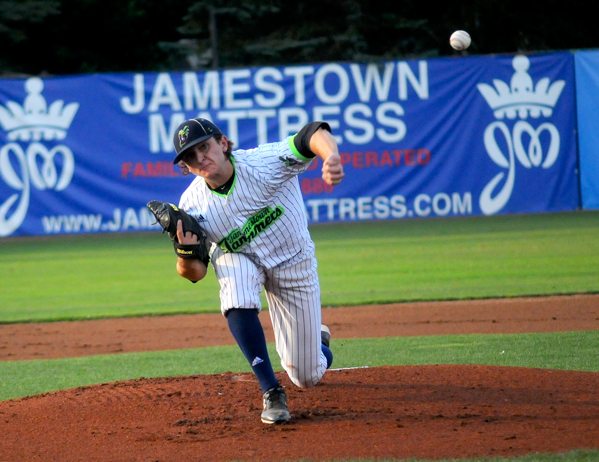 The Jamestown Jammers left runners on base in every inning of their Perfect Game Collegiate Baseball League playoff game against the Onondaga Flames on Tuesday night.

It got so bad that by the end of the 10th inning, the West Division’s No. 1 seed had stranded 20.

That was all forgotten in the 11th inning.

John Conti (Canisius College) hit a single to the left-center field gap that scored pinch-runner Christian Deaton (CSU Bakersfield) with the winning run as the Jammers walked off with a 3-2 win to advance to the West Division championship series.

“Throughout the game, with each at-bat it got better and better. I was able to have my best one last,” Conti said. “You have to be mentally prepared. You can’t let the situation overcome yourself. … This is my last summer here and I want to go out the right way.” 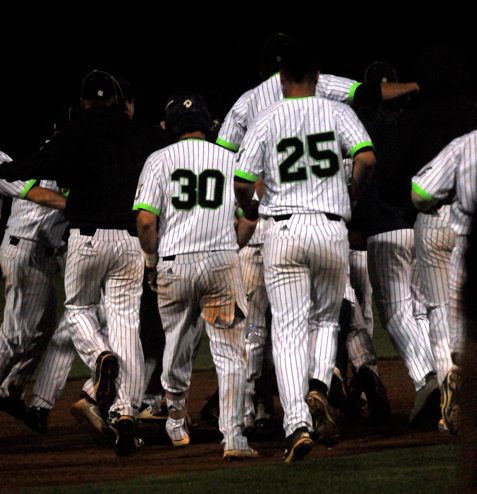 Jammers Ben Brookover (30) and Chris Stefl (25) race to join a celebration after the game-winning hit. P-J photos by Matt Spielman

Jamestown will now face No. 3 Elmira in a best-of-three West Division championship series after the Pioneers knocked off No. 2 Geneva, 12-2, in Tuesday’s other elimination game. Game 1 will be at 7:05 tonight at Diethrick Park.

Despite Jamestown’s inability to drive in runs through the first 10 innings of Tuesday night’s game, the 11th inning played out just how manager Anthony Barone imagined.

Matt Cross (Niagara County Community College) hit a hard single through the left side of the infield to lead off the frame and Barone called on Deaton to pinch-run.

“I told (Cross) to be patient because he was going to make one mistake,” Barone said. ” … He did, he hung a slider. Matt was very patient, he took that first fastball. … He got that pitch that he hung and he hit a line drive.”

Ryan Markey (St. John’s University) then laid down a sacrifice bunt to move Deaton up to second base and the Flames chose to intentionally walk leadoff hitter Christ Conley (Canisius), who had already reached base five times in the game. 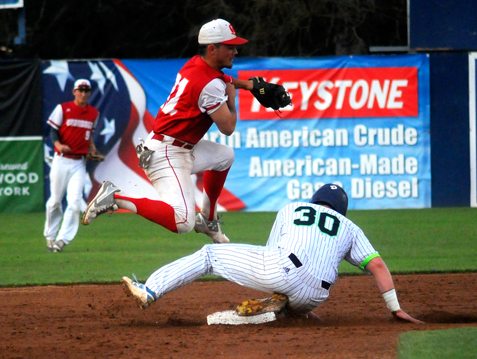 “After seeing the summer he’s had so far, I have 100 percent confidence in him,” Conley said of Conti, his teammate with the Golden Griffins. “He’s grown so much as a player since I’ve been at Canisius with him and he’s having a big summer right now. I’m so happy for him.”

Conti then fouled off a pair of pitches before lacing an 0-2 pitch past the glove of Onondaga shortstop Wyatt Myers.

“I literally was up there with two strikes saying, ‘Let the ball get deep.’ You just don’t want to get beat trying to go out there and get everything,” Conti said. “I had been a little late on the fastballs, but he left a slider a little bit middle and I was able to just kind of capitalize and put a good swing on it.”

Deaton froze on the line drive, but still had time to race home with the winning run, sparking a wild celebration on the infield as Conti attempted to run away from a throng of teammates near second base.

“I yelled a little bit at him, I said ‘Get going, get going,'” Conti said. “He was able to and the ball got out there far enough.”

“I was nervous. We’ve been talking about freezing on line drives because we’ve been getting doubled up a couple times this year,” Barone added. “He did a great job base running there just to see it clear. … He just motored across home.”

Jamestown would have never been in position to win the game late if not for a splendid performance by a pair of pitchers.

“This was outstanding. The guys just kept battling,” Barone said. ” … It was just a great team win, a great defensive game and a great pitching job.”

“Dave was awesome,” Barone said. “He just kept battling even though we weren’t scoring.”

The left-hander allowed an unearned run in the first when a throw got away from third baseman Chris Estrada (University of Texas-San Antonio) on a two-out infield single, allowing Trey Baur to reach second base. Sam Little followed with an RBI double to give the Flames a 1-0 lead. Onondaga added a run in the fourth inning as Little led off with a single, went to second on Camillo Spinoso’s groundout and scored on Alex Canty’s RBI single.

The Jammers gave Lyskawa no support, leaving two men on in the second, fourth and sixth innings while leaving the bases loaded in the first, fifth and seventh innings.

“I think guys were pressing because it was a playoff game,” Barone said. “Guys were a little tight, but I think we’ll be loose now.”

Isaac Meza (CSU Bakersfield) opened the eighth inning and was virtually unhittable. Meza set down the Flames in order in the eighth, ninth and 10th innings before Baur was caught stealing after a two-out single in the 11th.

“Isaac was just superb. He really grew up,” Barone said. “I just stuck with the guy there. He was in a groove and I just felt comfortable. He’s been so good this year and he deserved that.”

The Jammers and Pioneers will play a three-game series that will go from Jamestown to Elmira on Thursday with an if-necessary game back at Diethrick Park on Friday. Bradley Griggs (UTSA) will get the start on the mound tonight for the Jammers. 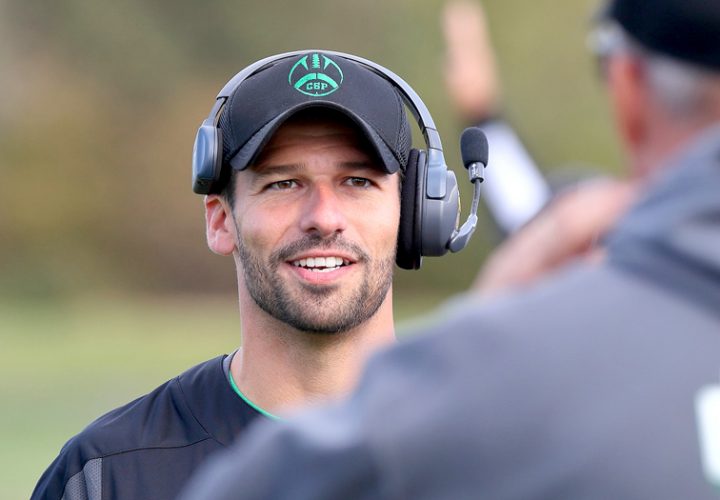