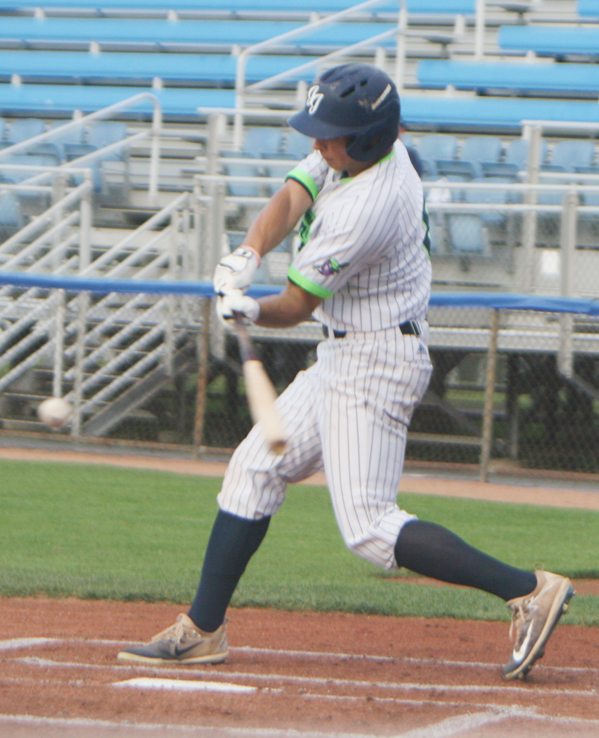 Jamestown’s John Conti swings at a pitch during the first inning of Thursday’s Perfect Game Collegiate Baseball League game against the Elmira Pioneers at Diethrick Park in Jamestown. The Jammers lost, but the Geneva Red Wings also lost the second game of a doubleheader late Thursday meaning Jamestown will be the West Division’s No. 1 seed when the playoffs begin Tuesday night. P-J photo by Scott Kindberg

Thanks to a Geneva Red Wings loss to the Newark Pilots in the second game of a doubleheader that ended late Thursday night, the Jamestown Jammers were able to lock up the top spot in the West Division heading into the upcoming Perfect Game Collegiate Baseball League playoffs.

Jamestown had a golden opportunity to clinch the West Division title on their own Thursday by virtue of a win over the Elmira Pioneers at Diethrick Park.

But, Allbry Major and the Pioneers had other plans.

The right-hander out of Xavier University limited the Jammers to just one run and four hits over seven solid innings, Elmira plated five runs in a big fourth inning and the Pioneers held off a late Jamestown charge to come away with a 6-4 victory.

Jamestown (31-14) starter Michael Ginther (Canisius College) breezed his way to through the first three innings against Elmira, but ran into trouble in the top half of the fourth.

Elmira’s five-run outburst was highlighted by a three-run double from Johnathan Crimmin (Siena), an RBI single from Devon Adams (Old Dominion) and another RBI single from Andrew Orzel (Wofford).

Ginther righted the ship and end up battling his way through six innings, surrendering the five runs and striking out two.

“I think he would’ve wanted to be a little bit better tonight,” Jammers head coach Anthony Barone said of Ginther. “Overall, he gave us six good innings though and I thought he kept us in the game.”

Jamestown jumped out to a 1-0 lead in the second following a triple from 2017 PGCBL All-Star Jimmy Standohar (Mercyhurst University) and an RBI groundout from Christian Deaton (CSU Bakersfield).

After that though, it was a struggle to find any consistent rhythm at the plate against Major.

“When we don’t score runs, it’s usually of mixture of us getting ahead in counts … and not taking advantage,” Barone explained. “And that’s sort of what happened tonight. We got in a lot of good hitting counts and we didn’t do anything with them.”

Despite having a tough time solving Major on the hill, the Jammers found some success and were able to cut the deficit to just 5-4 in the eighth against Elmira reliever Bryce Zaparzynski (Mansfield).

Connor Rule (Kansas State University) got things started with a walk and Nick Bernick (Niagara University) doubled to put runners on second and third with nobody out.

John Conti (Canisius) then continued his torrid stretch, roping a two-run double and Ben Brookover (University of Texas-San Antonio) later followed with a sacrifice fly to pull the home team within one.

Elmira added a crucial insurance run in the ninth on Troy Dixon’s sacrifice fly and hard-throwing Conor Grammes (Xavier) walked a batter in the bottom half of the ninth, but was able to lock down the save.

“We dug ourselves too big of a hole,” Barone emphasized. “It’s tough to beat a team like (Elmira) when you’re down four runs or five runs. It’s tough to do against a guy (like) Grammes throwing 97 (miles per hour). … They’re a good team. Sometimes you wish you’re on the other end of it, but you’ve got to give Elmira credit. We’ve got to come back to the ballpark (tonight) and battle.”

Conti and Bernick both had two hits in defeat for Jamestown.

The Jammers will be back in action tonight at Diethrick Park against the Utica Blue Sox. First pitch is slated for 7:05 p.m.