Sprint To The Finish

Jamestown first baseman Ben Brookover races to the bag for an out during the second inning of Sunday’s Perfect Game Collegiate Baseball League against Onondaga at Diethrick Park in Jamestown. P-J photo by Matt Spielman 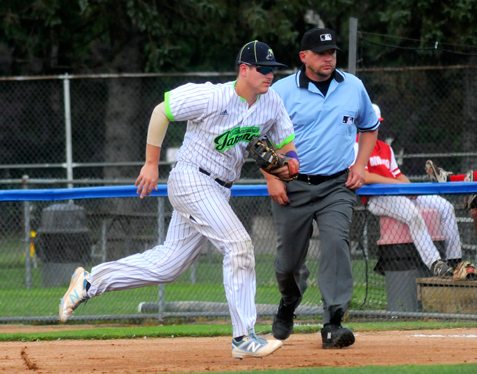 Jamestown first baseman Ben Brookover races to the bag for an out during the second inning of Sunday’s Perfect Game Collegiate Baseball League against Onondaga at Diethrick Park in Jamestown. P-J photo by Matt Spielman

In the Perfect Game Collegiate Baseball League where the Jamestown Jammers are the western-most team, road trips mean at least three hours on a bus to every single opponent.

Home field advantage can be even more important for the Jammers than other teams in the league.

That’s what made Sunday’s 6-2 win over the Onondaga Flames even more special as it clinched a home game for the first round of the PGCBL playoffs next Tuesday night.

Jamestown’s 30th win of the season means it can finish no worse than second in the West Division giving it a game against the third- or fourth-place team next Tuesday night at Diethrick Park. 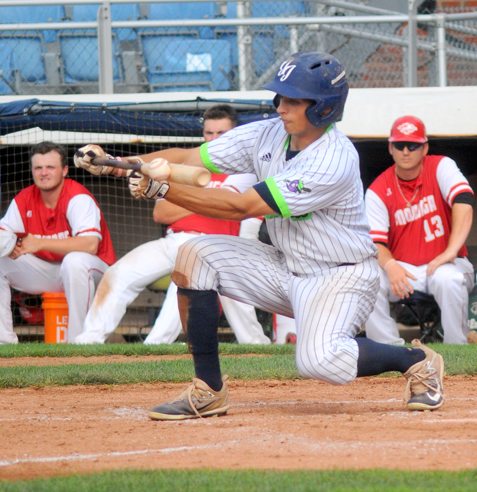 “I want to try to get to 35 (wins). We knew we had a really good ballclub,” Barone said. “Any time you can improve each year, I think you can see it on the field and off the field. … The guys are playing really well. We like to set a goal of 30-plus.”

Pitcher Chris Vallimont (Mercyhurst University) put the Jammers (30-13) in position to win Sunday with six innings of five-hit, one-run baseball as he struck out five and walked two. The offense came through late with a three-run bottom of the seventh inning to make a winner of Westfield graduate Nolan Hunt (Canisius College), who allowed the tying run in the top of the seventh inning.

“He was really good. He commanded his fastball,” Barone said of Vallimont. “He did a really good job of competing. He needs to compete to the zone, because he’s got good enough stuff where it doesn’t really matter where it is sometimes. As long as it’s in the zone it’s tough to hit.”

Colin Johnston (Monroe Community College) walked one over the final two innings to pick up his fifth save of the season and lower his earned run average to 1.23.

“When our starters can go six, it sets our bullpen up well,” Barone said. “Pretty much our guys have been Hunt, Isaac Meza (CSU Bakersfield) and Johnston. When we can get to the seventh, eighth and ninth we’re pretty good.” 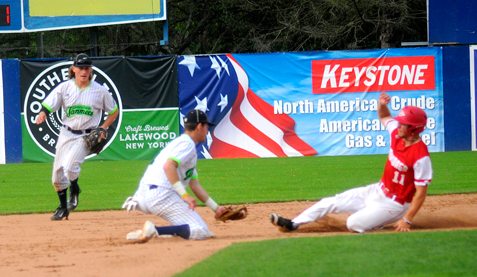 Vallimont put together his best start after joining the Jammers midway through the season. The Flames (18-23) scored their only run off him in the top of the third inning when Sam Little singled and went to second on a throwing error before Ryan Gallagher’s RBI double.

“I struggled early, but this outing really helped. This is what I’ve been trying to do and striving for all year,” Vallimont said. “The last two outings I tried to work on control more than anything. Those were the best two outings I’ve had all summer.”

Jamestown tied the game in the bottom half of the frame as John Conti (Canisius) singled, stole second, went to third on a Ben Brookover (University of Texas-San Antonio) flyout to left field and scored on a Skyler Valentine (UTSA) fielder’s choice.

The Jammers gave Vallimont a lead in the bottom of the fourth inning as Jimmy Standohar (Mercyhurst) reached on an infield single to the shortstop and went to second on an error. Nick Bernick (Niagara University) then singled to load the bases before Standohar scored as Conti beat out a potential inning-ending double-play ball.

The Flames tied the game in the top of the seventh inning and Colin BeVard tripled to right-center field and scored on Gallagher’s RBI single, but the Jammers took control in the bottom half of the frame. 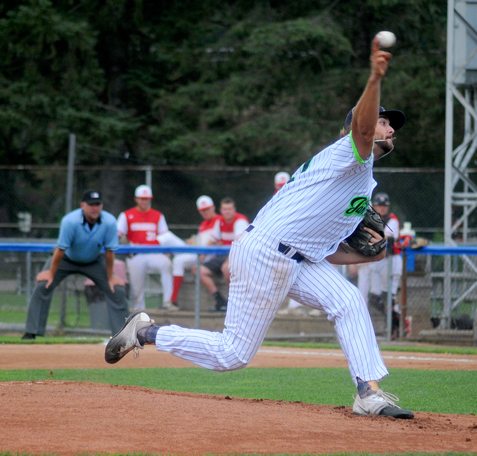 Pinch-hitter Ryan Markey (St. John’s University) led off with a bunt single and Jamestown loaded the bases with one out when Valentine and Chris Estrada (UTSA) were both hit by Trent Schulte pitches. With Alex O’Donnell (Mercyhurst) at the plate, Markey scored the go-ahead run on a wild pitch.

“We had a lot of opportunities early in the game. We sort of just waited and waited,” Barone said. “It started with a Markey infield bunt single. That’s what we’ve been doing the last couple of games, using small ball to score some runs.”

After O’Donnell struck out, Standohar came through with a two-run single to left field to give the Jammers a 5-2 lead.

“We gave him a day off (Saturday) and finally he’s been hitting balls hard,” Barone said of Standohar. “It was good that he saw that one get through … it gave us a couple-run cushion.”

Jamestown added an insurance run in the eighth inning as Connor Rule (Kansas State University) led off with a single and went to second when Bernick was hit by a pitch. Conti’s sacrifice bunt moved both runners up a base before a Christian Deaton (CSU Bakersfield) RBI single made it 6-2.

NOTES: Standohar and Rule each had two hits for Jamestown while Little and Gallagher each had two for Onondaga. … The Jammers return to action at home Tuesday against Newark (16-26) at 7:05 p.m.