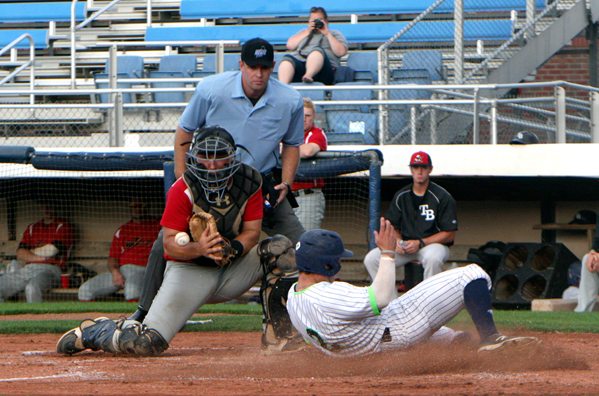 When it came time to find a fit for summer ball, Wildcats coach Brad Hill and Jamestown Jammers manager Anthony Barone came to an agreement that playing in Chautauqua County for a couple of months would be the right move for Rule.

On Friday night at Diethrick Park, Rule put together his finest game yet, and in the process helped the first-place Jammers to a 12-2 win over the Adirondack Trail Blazers in West Division action of the Perfect Game Collegiate Baseball League.

“The thing I’m proud of was that we just answered back and right away we scored a run,” Barone said. “In the second inning we continued it. We had really good at-bats throughout the whole night.” 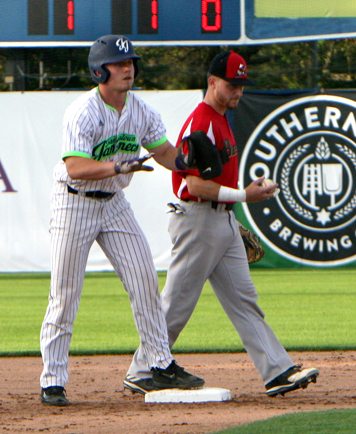 Rule jump-started the Jammers offense in the second inning with a leadoff double before coming around to score on a sacrifice fly from Chris Conley (Canisius College). Nick Bernick (Niagara University) followed Rule with a single, stole second and scored on an RBI double by Chris Estrada (University of Texas-San Antonio) to give Jamestown a lead it would never relinquish.

“We signed Connor pretty late. He’s going to be a sophomore and we figured it would be a really good situation for him, catching behind someone who is a veteran guy to learn from,” Barone said about backing up Conley. “As a freshman you really see that progression halfway through the year in the summertime. It was just a really good offensive performance for him.”

The Jammers added on in the third inning as Skyler Valentine (UTSA) walked, stole second and third, and scored on a sacrifice fly by Collin Stack (University of Maryland-Baltimore County). Christian Deaton (CSU Bakersfield) walked and went to third on an errant pickoff throw before scoring on a wild pitch to give Jamestown a 5-2 lead. Rule capped the scoring when he walked, stole second, advanced to third when Conley was hit by a pitch and scored on an error.

“We do a lot of good baseball things offensively. That’s one thing we do, move runners up and get guys in from third with one out,” Barone said. “These guys are very experienced kids and they understand the game very well.”

The six runs would prove to be plenty for Chris Vallimont (Mercyhurst University), who settled down after allowing a two-run home run to John Michael Boswell with one out in the first inning. Vallimont got out of the frame with a double play and then faced just two batters over the minimum in his final five innings, striking out a total of nine. 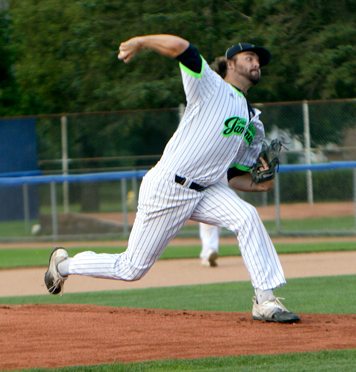 “A kid got a good swing on a fastball, but other than that he was really good and back to his old self,” Barone said of Vallimont. “He commanded his offspeed really well and located his fastball. He had a really good outing.”

Nolan Hunt (Canisius) navigated a three base runner seventh inning with the help of Conley, who threw behind a Adirondack (9-17) runner at first base to pick him off for the first out. Isaac Meza (CSU Bakersfield) helped Hunt out of an eighth-inning jam with a strikeout, a pop out and a fly out.

“I thought that was really good by Isaac. He’s been lights-out out of the pen for us this year,” Barone said. “He came in in a tough situation and did a really good job. That’s what he’s been doing lately.”

The Jammers put the game away with a six-spot in the eighth inning, and Rule was in the middle of the action again. Conley led off the inning with a single, Estrada walked and Ben Brookover (UTSA) singled to load the bases for Valentine who tripled to the wall in right-center field to clear the bases. Stack then reached on a fielder’s choice and Deaton was hit by a pitch before Rule hit a two-run triple to the right-field corner.

“I needed that. I haven’t hit many extra-base hits, but it felt good,” Rule said. “It was an outside pitch so I took it the other way. I wouldn’t say I’m a pull hitter or an opposite-field hitter.”

Rule came in to score on a dropped fly ball in left field before Conley walked to reach base for the fifth time on the night, improving his league-leading on-base percentage to .604 — nearly 100 points higher than the second-place hitter.

“Christ is legit. He’s a great player,” Rule said. “I’m learning a lot from him by watching him play.”

NOTES: The Jammers reached base a combined 14 times on walks and hit batters. … Estrada and Valentine reached base four times apiece. … Connor Ryan (Mercyhurst) pitched a scoreless ninth for the Jammers. … Jamestown will send St. Bonaventure’s Nate Grant (1-1, 5.00 ERA) to the mound at 7:05 p.m. tonight at Colburn Park in Newark.