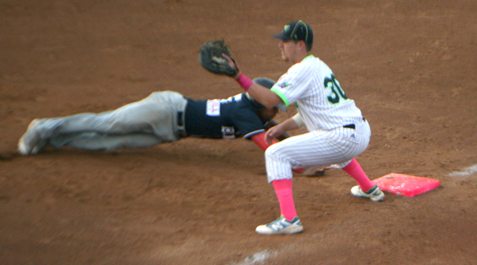 The Jamestown Jammers nearly pulled off their second dramatic, come-from-behind victory of the week Friday night.

But Colton Evans had other ideas.

Elmira’s ninth-place hitter from Cal Davis blooped an opposite-field double to left with two outs in the top of the 10th inning that scored Andrew Orzel (Wofford) all the way from first base to lift the Pioneers to a wild 5-4 win over Jamestown in Perfect Game Collegiate Baseball League action at Diethrick Park.

The Jammers’ loss is their eighth in their last 11 games. And when combined with second-place Geneva’s doubleheader sweep over Adirondack, Jamestown’s lead in the West Division has been reduced to 2.5 games.

“That’s baseball, I guess,” Jammers head coach Anthony Barone said. “We’re not robots, we’re humans and we make mistakes. We have to move on to the next one.” 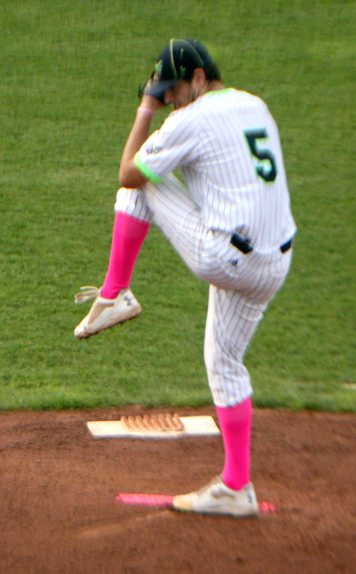 This setback, however, was especially painful.

Trailing 4-0 through eight innings and managing only three hits to that point, Jamestown sent nine men to the plate in the bottom of the ninth against reliever Connor Grammes (Xavier) and scored four runs, highlighted by a two-run single by Ryan Markey (St. John’s) and RBI singles by Chris Stefl (St. John’s) and Skyler Valentine (Texas-San Antonio) to tie the game.

But Parker Ford (Mississippi State) worked out of the mess by striking out Christian Deaton (CSU Bakersfield) and Jimmy Standohar (Mercyhurst) with runners at first and second.

“It was a good comeback and a lot to be proud of,” Barone said. “We had a chance to win the game and we didn’t get it done.”

Elmira pulled ahead in the top of the 10th.

Jamestown reliever and losing pitcher Jacob Gilhaus (Kalamazoo) retired the first two batters in the inning, but then walked Orzel, which brought Evans to the plate. He ultimately fought off a pitch, flaring it down the left-field line where it ended up bouncing into foul territory. By the time the ball was retrieved and fired to the plate, Orzel had scored, giving the Pioneers the lead for good, 5-4.

The dramatics weren’t over for that half-inning, however.

With Brett Rodriguez (Wofford) at the plate, Evans stole third, and when he tried to score later in the at-bat when a pitch got away from Jammers’ catcher Matt Cross (Niagara County Community College), he was tagged out by Cross on a very close play at the plate.

That prompted Elmira head coach Brian Hill to bolt from the dugout in protest. Following a heated dispute with home-plate umpire Bill Stanley, Hill and assistant coach Archie McNellis were both ejected.

As it turned out, Hill’s angst was tempered by Ford, who retired the Jammers in order in the ninth, to raise his record to 2-3 on the season.

Until the ninth, the Pioneers were in control, behind the pitching of starter Houston Roth (Mississippi), Josh Smith (Kentucky) Jackson Tedder (Virginia) and TJ Stuart (Manhattan). The quartet combined to yield just three hits and strike out 10 through eight innings.

But the Jammers, who won in walk-off fashion Wednesday night against Geneva, rallied in the bottom of the ninth against Grammes, only to be disappointed with the final outcome.

Conti and Valentine each had two hits for Jamestown.

Troy Dixon (Samford), Grammes, who started the game as the designated hitter, Brett Vosik (Kansas) and Evans all had two hits for Elmira, which scored single runs in the first, third, fifth and seventh. Of those four runs, only two were earned as the Jammers struggled defensively.

The two teams square off again tonight at Elmira. First pitch is 7:05 p.m.

NOTES: Cory Blessing (Ohio) started for Jamestown, working the first four innings. Nate Grant (St. Bonaventure) came on in relief with the bases loaded and nobody out in the fifth and retired the side without allowing a run. All told, he pitched three innings before giving way to Connor Ryan (Mercyhurst), who worked a perfect inning. … Jamestown’s Cross was also ejected from the game after striking out in the 10th inning. … The announced attendance was 590.