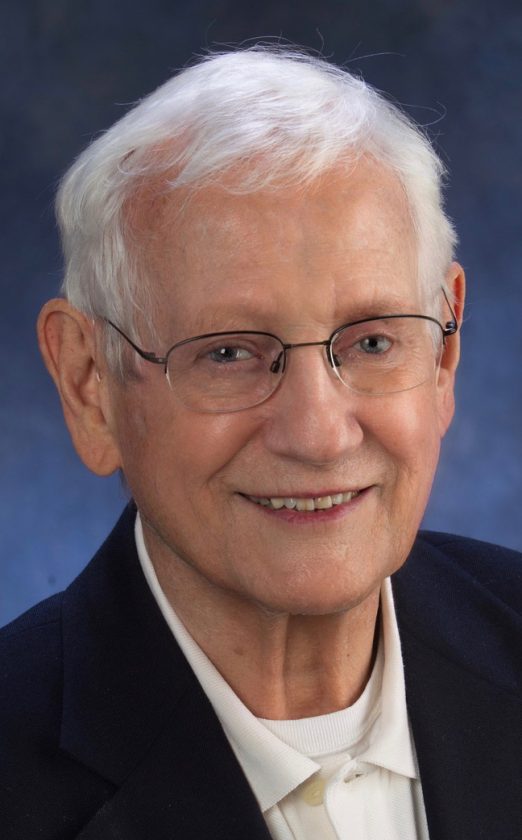 Russell A. Fuscus of 19 Roland Road in Jamestown passed away peacefully on Thursday, Aug. 8, 2019, surrounded by the love of his family. He was 88 years old.

The story of Russ’s life should start in 1950 because that was when he met JoAnn Babcock. He and JoAnn were together for 68 years and married for 63 and everyone who knew them noticed the tenderness and love they experienced throughout their lives. That doesn’t mean they lived in a fairytale, but rather that they were connected in a way for which many hope but few experience. JoAnn died on Jan. 13th of this year and Russell followed her seven months later. No one in the family was surprised that their deaths came so close together for they were seldom apart since they met when he was 20 and she was 18.

A life is defined by many things — by love, by struggles, by family and by success. A defining element of Russell’s life was self- reliance, he was a man who didn’t wait for opportunities to appear but made them. He started the first of seven successful business enterprises in 1954 including the Jamestown Dance Club, Southwest Music (coin machines), Pennybridge Corporation (background music) and a projection outdoor advertising company. He will probably be best remembered for The Casino in Bemus Point, which he and JoAnn owned from 1976-98. Countless families spent their summers at The Casino and recall the warm welcome, smiling face and generous heart of Russell Fuscus. Generations of young people had their first jobs at The Casino and he helped countless teens steer the course into adulthood with lessons of leadership, hard work and fun.

When Russell took over The Casino in 1976, Bemus Point was a somewhat sleepy summer village. He formed the Bemus Business Association with Dan Dalpra of the Italian Fisherman and Rick Wight of Skillman & Wight with the goal of turning Bemus into a summer destination. He built creative promotion after creative promotion to bring people into the village. Tug-A-Ferry featured two teams on either side of the lake who engaged in a tug of war with the Bemus Point Stow Ferry in the middle, complete with a delivery truck full of beer and WKSN radio station broadcasting the event live. Perhaps his best promotion was Big Flap, in which The Casino set a Guinness World Record for most chicken wings consumed — over 4,000 pounds in 12 hours washed down by thousands of glass bottles of Bud Splits.

Russell’s life was also defined by leadership and service. He was president of the Chautauqua County Cancer Society in 1967 and chairman of the Board of Directors of the N.Y. State Cancer Society in 1975. In 1973, he served as the chairman of the Board of Trustees of the Presbytery of Western New York and was Chautauqua County clerk in 1972. In 1970, he was the director of the Western New York Federal Census.

He and JoAnn led the fight for fluoridation in Jamestown’s water system and he was a constant presence in city, county and state politics. He managed many political campaigns including the first victory of state Senator Jess Present who went on the be the longest serving member of the New York State Senate. And in 1982, he was the chairman for the grand opening of the Chautauqua Lake bridge. He was also on the board of the Chautauqua County Parks Commission and was instrumental in establishing the Overland Trail System.

Of all his professional accomplishments, Russell felt he had the most impact in the New York State Jaycees. He served locally in Jamestown, served on the Jaycees National Board of Directors and in 1965, he was elected New York State president for which he received the national Clayton Frost Award as an outstanding state leader. He enjoyed the Jaycees because of the character and leadership qualities it fostered in himself and other young men. In a 2010 article on leadership and the Jaycees, he wrote:

“It is commonly believed that leaders are born, not made; that anyone who can organize others to set goals and motivate them to accomplish those goals are simply gifted. I am not suggesting that talents for leadership do not vary or that certain individuals are natural leaders. However, I am saying that leadership can be taught, that the skills necessary to set agendas, develop goals, organize people and ensure that objectives are met can be learned. And teaching leadership is at the core of the Jaycee movement and is the claim that all Jaycees have on improving our communities and the lives of our neighbors.”

Russell was born in Brownsville, Pa., and he spent much of his childhood in Tarrytown, N.Y., where his love of the steamships on the Hudson River led to the creation of the Great White Fleet Museum at The Casino to commemorate Chautauqua Lake’s own steamboat history.

He graduated from Southwestern Central High School in 1948 and attended Jamestown Community College, Syracuse University and the University of Notre Dame School of Continuing Education.

Besides being preceded in death by his wife JoAnn, he follows his parents, Anthony and Sara; sisters: Sara and Linda; and his brother, George.

The funeral services will be held Friday, Aug. 23, at noon in the Lind Funeral Home. Friends will be received for one hour prior to the service in the funeral home. A luncheon will follow at the Landmark Restaurant in Jamestown.

Burial will be in Sunset Hill Cemetery in the Fuscus family plot.

In lieu of flowers, memorials may be made to Fenton History Center, 67 Washington St., Jamestown, NY 14701.

One may leave words of condolence at www.lindfuneralhome.com.