¯ Robert D. Ridgeway, 38, of Jamestown was charged with unauthorized use of a motor vehicle and second-degree harassment. Officers responded Sunday at 6:45 a.m. to Forest Avenue for a domestic disturbance. An investigation found that Ridgeway allegedly punched a female victim in the face and left with her vehicle without permission. He returned a short time later and was taken into custody. Ridgeway was being held for arraignment, while the victim’s vehicle was located parked about a block away.

¯ Mathew L. Brown, 21, of Jamestown was charged with petit larceny and seventh-degree criminal possession of a controlled substance. Brown was allegedly observed taking items from Walmart without paying on Friday. While being taken into custody, Brown was reportedly found with methamphetamine. He was released with tickets to appear in Busti Town Court later.

¯ RANDOLPH — Eric Olson, 28, of Jamestown was charged with felony driving while intoxicated. Troopers responded Friday to Interstate 86 in Randolph for a report of a vehicle “all over the road” in the eastbound lane. Olson was stopped and, after reportedly failing several field sobriety tests, later provided a breath sample of 0.17%. A check of Olson’s driving record showed a past DWI conviction within the past 10 years. Olson was processed and issued an appearance ticket to be in Randolph Town Court later.

¯ Kara J. Proctor, 43, no address listed was charged with fourth-degree grand larceny and unlawful use of a debit card. Police responded to a report of a larceny at a business in the town of Ellicott. An investigation found that Proctor had allegedly taken and used a debit card belonging to another person. Proctor was issued an appearance ticket to be in Ellicott Town Court later.

¯ LITTLE VALLEY — Kyle V. Brock, 56, of Salamanca was charged with aggravated driving while intoxicated, DWI, failure to keep right and unsafe speed. Deputies investigated a crash that took place Sunday at 1:58 a.m. on Route 353 in the town of Little Valley. A vehicle was found off the road, and Brock was located a short distance from the scene. An investigation found that the vehicle was southbound when it crossed through oncoming lanes and exited the road. Brock reportedly showed signs of intoxication and is scheduled to appear in court later.

¯ CONEWANGO VALLEY — Joshua J. Meacham, 38, of Randolph was charged with second-degree assault. Deputies looked into a domestic incident that reportedly took place Sunday at 12:30 p.m. on Main Street in the town of Randolph. Meacham was found to have allegedly hit a woman in the face with glass. The victim was taken to UPMC Chautauqua. Meacham was processed and is scheduled to appear in Randolph Town Court later. 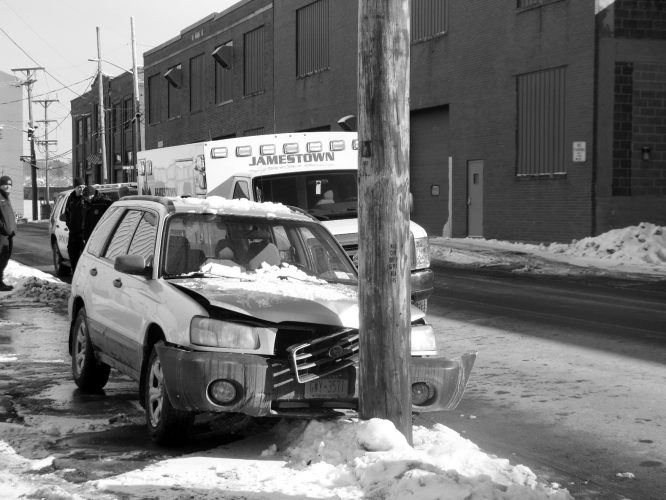