From left Skip Anderson as Santa Claus and Jon Thompson as Buddy rehearse a scene with other cast members in “Elf The Musical” to be performed at Lucille Ball Little Theatre. P-J photo by Michael Zabrodsky

Heather Young, left, and Anne Eklund, right, are co-directors of “Elf The Musical” to be performed at Lucille Ball Little Theatre. P-J photo by Michael Zabrodsky

From left Skip Anderson as Santa Claus and Jon Thompson as Buddy rehearse a scene with other cast members in “Elf The Musical” to be performed at Lucille Ball Little Theatre. P-J photo by Michael Zabrodsky

Co-directors Heather Young and Anne Eklund have similar views about directing the production.

“I love to watch them (cast members) grow and see how they develop their characters,” Young said.

Ecklund said when the cast arrives for the first few rehearsals, members get into groups and begin to block scenes, and then as scenes progress, they take them and begin putting them in running order.

Heather Young, left, and Anne Eklund, right, are co-directors of “Elf The Musical” to be performed at Lucille Ball Little Theatre. P-J photo by Michael Zabrodsky

Eklund told the cast at the beginning to have fun with their parts. 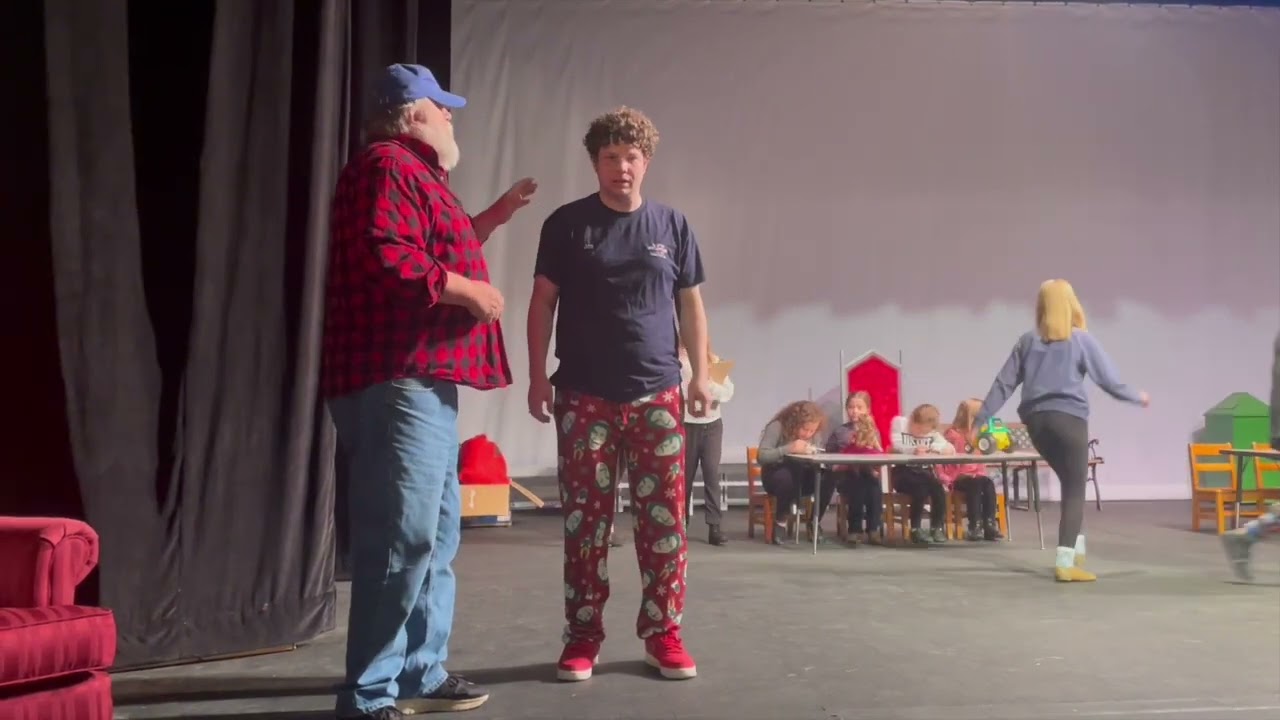 “We tell them to have fun and take chances — to try things, (in) different ways. You know, now is the time to take your chances, and then you settle into your character, and you’ll have an idea of where you want to go with it,” Ecklund said.

LBLT Board President Holly Weston said the Artistic Direction committee meets year-round to discuss shows for the upcoming season. Committee members meet monthly to discuss scripts they’ve read and make suggestions on shows for the next season based on community interest, actor interest, and shows that are feasible in the LBLT space.

Weston added a recommendation for the season, which is then presented to the Board of Directors for approval before LBLT can begin the process of applying for the rights to each show.

“It’s a much longer and more detailed process than most probably realize. … The committee is already mapping out ideas for not just 2024, but 2025 as well,” Weston noted.

According to lucilleballlittletheatre.org, based on the holiday film, “Elf,” this fish-out-of-water comedy follows Buddy the Elf in his quest to find his true identity. Buddy, a young orphan, mistakenly crawls into Santa’s bag of gifts and is transported to the North Pole. The would-be elf is raised, unaware that he is actually a human until his enormous size and poor toy-making abilities cause him to face the truth. With Santa’s permission, Buddy embarks on a journey to New York City to find his birth father and discover his true identity. Faced with the harsh realities that his father is on the naughty list and his half-brother doesn’t even believe in Santa, Buddy is determined to win over his new family and help New York remember the true meaning of Christmas.

“I love being on stage because of the feedback from the audience. It’s an adrenaline rush,” said Jon Thompson, who is portraying Buddy the Elf in the musical.

“Little Theatre has been a part of my life for longer than it has not,” Weston said. “I was first introduced to Little Theatre around the age of 7 when my grandmother would take me to see shows. Around the same time I auditioned for and got into the Junior Guilders organization, and I started participating in main stage musicals in middle school. After moving away from the area to attend college for musical theatre and dance, I really love to be back home and be able to continue to be involved with Little Theatre. I’ve met some of my closest friends due to being in shows with them. I met my husband indirectly through Junior Guilders. The casts I’ve been lucky enough to be on stage with are like family. On top of this, I love the creative outlet in my life when I’m in a show. And I love having the opportunity to teach dance and choreography to local youth and adults who are interesting in growing in this art form.”

Weston added the LBLT season runs from January to December. The main season offers six productions — one drama, 1-2 comedies and then a variety of musicals to round out the season. A youth theatre show is also offered each year, but is not part of the main season ticket package.

Jamestown continues to find itself on the periphery of the larger state and national discussion of migrants seeking ...

Hospitals Say Staffing Gaps Could Be Relieved By Medicaid Changes

ALBANY — Numerous upstate hospitals are wrestling with fiscal shortfalls and staffing shortages that could be ...

With only a couple more months of winter, concerns about the next steps regarding the issue of homelessness are ...