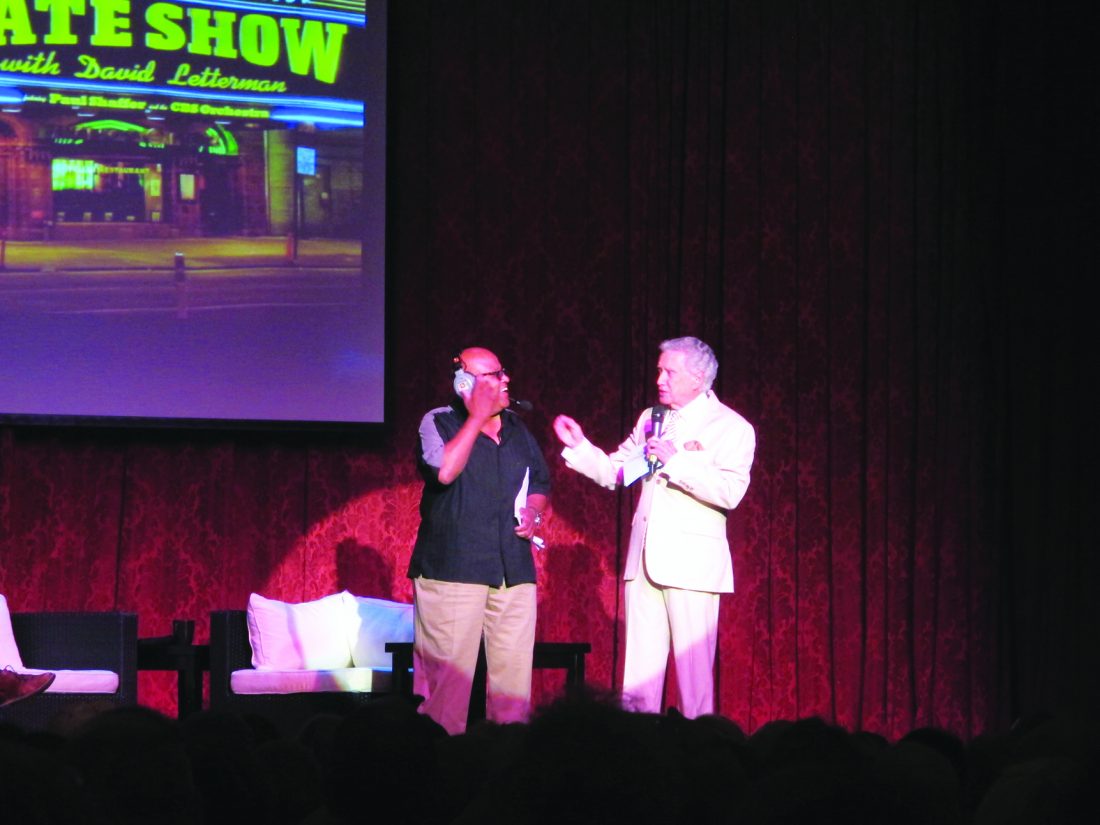 Biff Henderson, former stage manager of the Late Show with David Letterman, is pictured with television legend Regis Philbin in July 2015 at the Willow Bay Theater in Jamestown. Philbin passed away Friday night at the age of 88. P-J file photo

The National Comedy Center has added its voice to those mourning the loss of Regis Philbin, the genial host who shared his life with television viewers over morning coffee for decades and helped himself and some fans strike it rich with the game show “Who Wants to Be a Millionaire,” who passed away Friday night at the age of 88.

“From his days as an NBC page for Steve Allen’s Tonight Show to his role as Joey Bishop’s sidekick in the 1960s to the host of ‘Regis and Kathie Lee’ and ‘Regis and Kelly’ for 23 years, Regis was not only extremely funny himself but loved shining a spotlight on comedic talent,” Gunderson said in an email to The Post-Journal.

That affinity toward inspiring talent was evident during a 2015 visit to Jamestown during the center’s groundbreaking events to moderate a discussion with the senior production staff for David Letterman’s late night shows a few months after Letterman ended his 33-year career in late night television.

“As the most frequent guest in ‘The Late Show with David Letterman’ history and so beloved by Dave and his audience, Regis was the perfect moderator for this discussion,” she said.

“This is the beginning of something sensational — the National Comedy Center! Right here in Jamestown,” Philbin told the sold-out Willow Bay Theater crowd, according to the next day’s edition of The Post-Journal. “I’m happy to be here right now with you. Dave couldn’t be here because he’s hanging out with his Bison in Montana.”

According to Gunderson, Philbin was very vocal in his support of the center, referring to the art of comedy as “essential to everybody in the country.”

“After learning about our plans for the Comedy Center, Regis clearly thought it was a wonderful idea and located in the right place – Lucille Ball’s hometown,” she said. “His words of encouragement were greatly appreciated as the National Comedy Center began the three-year journey from groundbreaking to grand opening.”

“It’s part of their lives and that’s what it’s all about,” Philbin continued during an interview after the July 30, 2015, event. “But to think that no one in the country has thought about making a decision like you’ve made here, it’s unbelievable. I think you picked the right place – Jamestown. Lucille Ball was very, very funny in everything she did.”

During that interview, he said he not only enjoyed the panel, but also those in attendance.

“You had a good idea here (with the Letterman creative team panel),” he said. “I enjoyed it very much. I thought the audience was terrific. I think they enjoyed themselves and they were happy to be here.”

He added of the center: “It was the beginning of something that I think is important to the whole country, as a matter of fact. And I think you’re going to do a great job.”

Regis Francis Xavier Philbin grew up in the New York borough of the Bronx, the son of Italian-Irish parents and named for the Roman Catholic boys high school his dad attended. He went to Notre Dame University, and was such an enthusiastic alum, he once said he wanted his ashes scattered there.

In 1967, Philbin was hired as the announcer and sidekick to comic Joey Bishop on his network show. When he heard that he was going to be fired because of poor ratings, Philbin tearfully announced he was leaving on July 12, 1968, walking off during a live broadcast. He returned three days later after letters of support poured in,

After three years of commuting to St. Louis each week for a local Saturday night show, Philbin became a star in local morning television — first in Los Angeles, then in New York. In 1985, he teamed with Kathie Lee Johnson, a year before she married former football star Frank Gifford, and the show went national in 1988.

Gifford left the show in 2000. After a tryout period for a replacement, soap star Ripa (“All My Children”) filled the slot.

The same hustler who parked cars in Hollywood worked just as hard to land the job on “Who Wants to Be a Millionaire.”

Forbes reported that two-thirds of ABC’s operating profit in 2000 was due to “Who Wants to Be a Millionaire.”

Philbin logged more than 15,000 hours on the air, earning him recognition in the Guinness Book of World Records for the most broadcast hours logged by a TV personality, a record previously held by Hugh Downs.

Celebrities routinely stopped by Philbin’s eponymous syndicated morning show, but its heart was in the first 15 minutes, when he and Gifford — on “Live! with Regis and Kathie Lee” from 1985-2000 — or Ripa — on “Live! with Regis and Kelly” from 2001 until his 2011 retirement — bantered about the events of the day. Viewers laughed at Philbin’s mock indignation over not getting the best seat at a restaurant the night before, or being henpecked by his partner.

Ripa and her current partner, Ryan Seacrest, called Philbin “the ultimate class act, bringing his laughter and joy into our homes every day.”

“There are no words to fully express the love I have for my precious friend, Regis,” Gifford said Saturday on Instagram. “I simply adored him and every day with him was a gift.”

He’s survived by his wife, Joy, and their daughters J.J. and Joanna Philbin, as well as his daughter Amy Philbin with his first wife, Catherine Faylen, according to People.

The Associated Press contributed to this report.