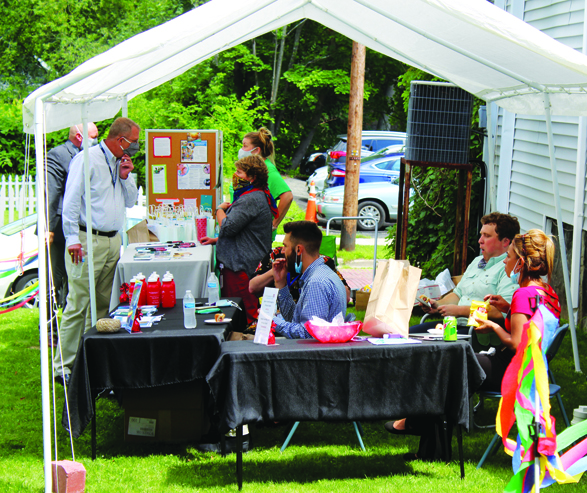 Local organizations helped celebrate the 30th anniversary of the passing of the Americans with Disabilities Act during a socially distanced picnic in the backyard of the Southwestern Independent Living Center’s 843 N. Main St. location with a showcase of their services to visitors.

The goal and mission of the Southwestern Independent Living Center, to executive director Marie Carrubba, is simple — to provide those living in the surrounding community and a chance for “equal access and equal opportunities.”

“That’s all anyone is asking — just to have the same services available as anyone else in the community,” said Carrubba, whose organization helped celebrate the 30th anniversary of former President George H.W. Bush’s signing of the Americans with Disabilities Act into law with a socially distanced picnic lunch at its location at 843 N. Main St. on Monday.

“It’s certainly worth celebrating and an event where you can have a socially distanced picnic here in the backyard is great,” Assemblyman Andrew Goodell, R-Jamestown one of several local leaders in attendance, added. It’s been thirty years of providing high quality services to the residents of Chautauqua County … and (the Southwestern Independent Living Center) has provided a tremendous service to a lot of people in our community and help them maintain their independence even though they have a disability and helping thousands of people with those critical issues.”

Since its founding and the bill’s passing, staff at the center have worked tirelessly to empower nearly 1,500 community members strive for their independence each year by helping them to address critical issues like housing and transportation as well as medical concerns, among other services.

“When you think about their mission and what they try to do it’s amazing.” County Executive PJ Wendel said. “It’s just trying to get people living on their own and getting them back into the community. That independent living is what they need and having that sense of independency is what they need.” 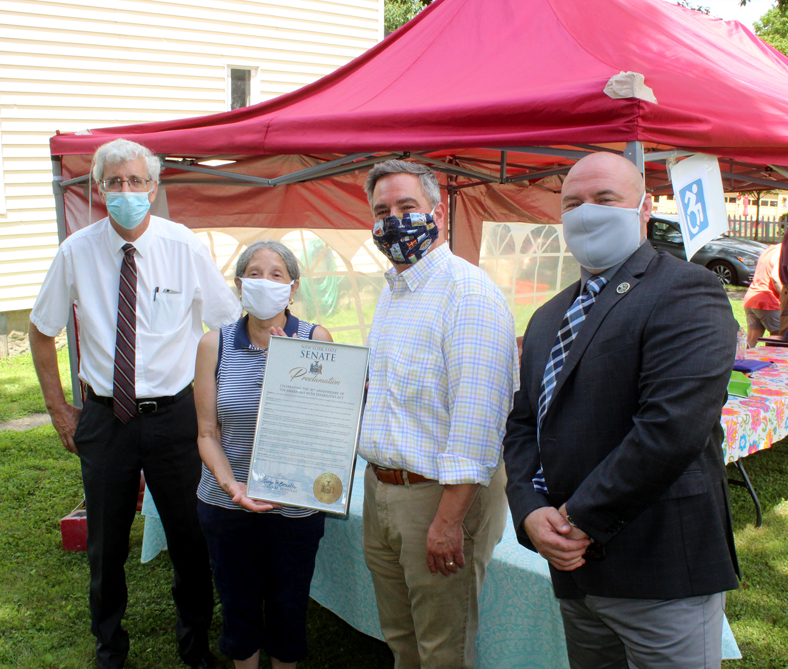 Those services are needed especially now amid the COVID-19 pandemic, he added.

“You need groups like this to help us get back to some sort of semblance of what we were used to while still realizing that safety is the foremost thought and help get people feeling like they were before,” he said.

“I’m just grateful for this organization for being here and recognizing this occasion today and the ongoing effort and fight and the collaboration you’re seeing in surrounding people with services,” added state Sen. George Borrello, R-Sunset Bay, referencing the additional community services that were in attendance at Monday’s function where he presented the center with a proclamation from the New York State Senate. “Now, the question is how we continue to fund all of these things. I think in many ways we’re bridging the gap of communication, we’re addressing the stigma that is often involved with people who face challenges. Now, we need to continue that fight by assuring that we don’t lose focus that services like this are critically important to fund.”

Agencies that were in attendance included The Chautauqua Center, The Resource Center, Hillside Children’s Center and other services.

“It’s been an opportunity for people to showcase what they do and let the neighborhood know that there are things they can take advantage of,” Carrubba said. “Most of the services are at no cost. It’s an opportunity to let people know that we are here, we are here to support them and whatever their endeavors are to stay as independent as possible.”

Luckily, legislation like the ADA paired with development in the city have helped to increase that progress, she said.

“The accessibility is huge for people with physical issues,” added Carrubba, the center’s executive director since its founding in 1983. “The city has been tremendous in supporting those curb cuts and making buildings accessible. All new construction has had to be compliant with physical access for people and the integration of services so that people can live and work in the community that they can choose and the housing that they can choose — it’s not segregated housing, they can choose like everyone else where they want to work and where they want to live and they are given equal access … It’s consumer driven, meaning the individual directs what services they want as opposed to being told what they have to do.”

“It’s much better than it was 30 years ago, but we still have a long way to go,” she said, noting that the employment of disabled citizens has also come a long way.

“There’s so much that people were not thinking about in terms of construction of older buildings in terms of what services needed to be provided and in terms of employment,” she added. “Thirty years ago most people didn’t think about people with severe disabilities working. That’s not true anymore. There are many people who are very valuable contributors to society and are employed. The Resource Center is the perfect example for that, where they are actually providing equipment for the military and all kinds of sewing projects and are assisting Southern Tier Brewing in getting out to market in packing and shipping. It’s been tremendous and that’s something people did not think about 30 years ago.”

Carrubba noted that the center is available for “anyone” with no restrictions.

Local organizations helped celebrate the 30th anniversary of the passing of the Americans with Disabilities Act during a socially distanced picnic in the backyard of the Southwestern Independent Living Center’s 843 N. Main St. location with a showcase of their services to visitors.