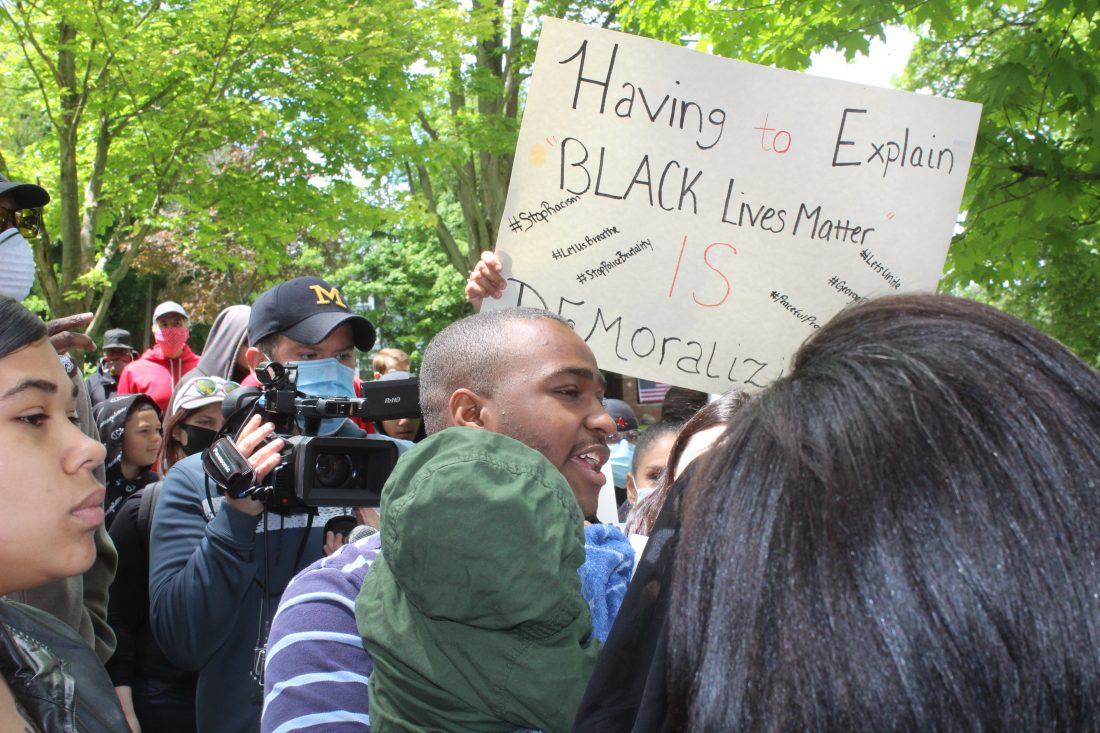 An African American man, he is also a new father.

And so, when his time came to address the crowd that gathered in Down Park on Sunday in protest of the death of Minneapolis resident George Floyd, his remarks were focused on the future that lies ahead for his eight-month-old son.

“As a new-time father, for my own son, how are we as a community trying to install what Martin Luther King Jr. said the best — to be judged not by the color of our skin, but based upon the content of my character?” he said, with his child perched on his shoulder. “Me, myself, I’m in the military. I’ve done great things for this country. Why am I looked down upon because of the color of my skin? I have no choice. Hell, if I could pick a color. I’d pick clear. Why should I be deemed by my skin?” 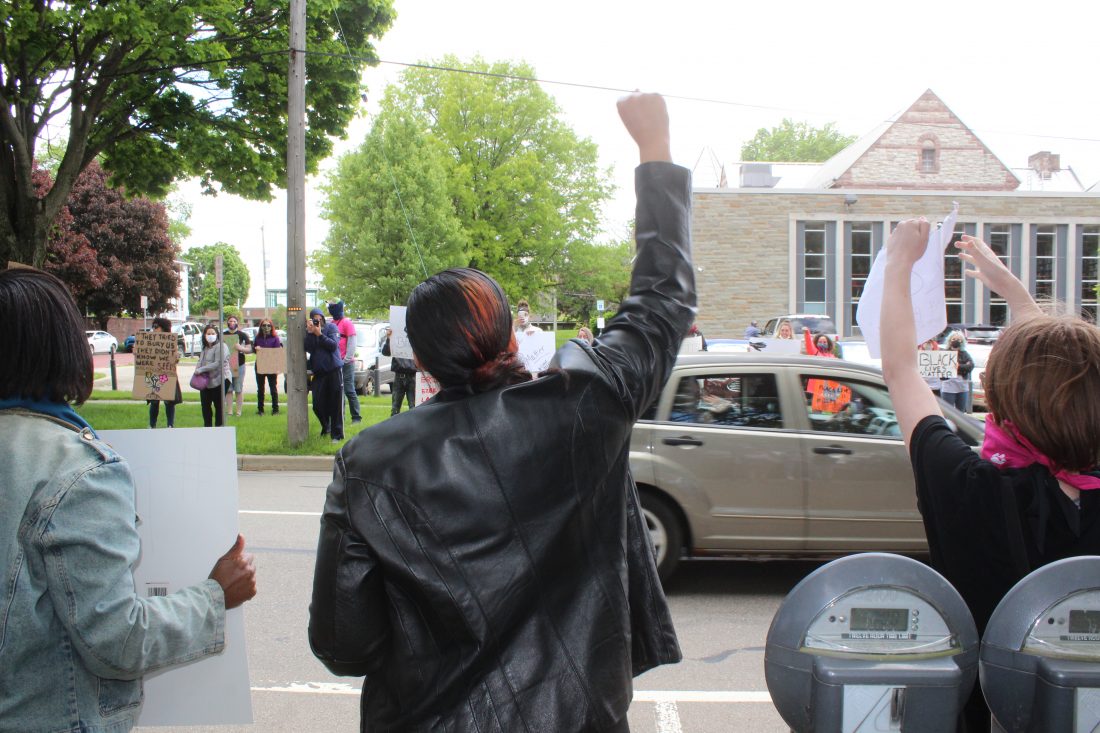 Willburn was one of nearly 100 people that gathered peacefully in Dow Park — steps away from a monument honoring Jamestown’s role in the Underground Railroad — six days after the death of Floyd. Derek Chauvin, fired Minneapolis police officer, was charged with murder and manslaughter in a complaint filed on Friday after being captured on video pressing his knee on Floyd’s neck, who after several minutes went unresponsive.

“We stand here for George Floyd,” the Rev. Chloe Smith, one of the organizers of the event and a local pastor, told the crowd. “We stand here for his family and we are demanding a change in our nation,” Chloe Smith. “We’re not going to be reactive, having to protest after something happens. We want communication with our law enforcement now. We want to connect with our law enforcement now.”

The demonstrators did have the chance to interact with law enforcement and local officials — Jamestown Mayor Eddie Sundquist, city police chief and director of public safety Harry Snellings and Chautauqua County Sheriff Jim Quattrone, all attended the event and addressed the crowd and media that had gathered in front of the park’s playground. 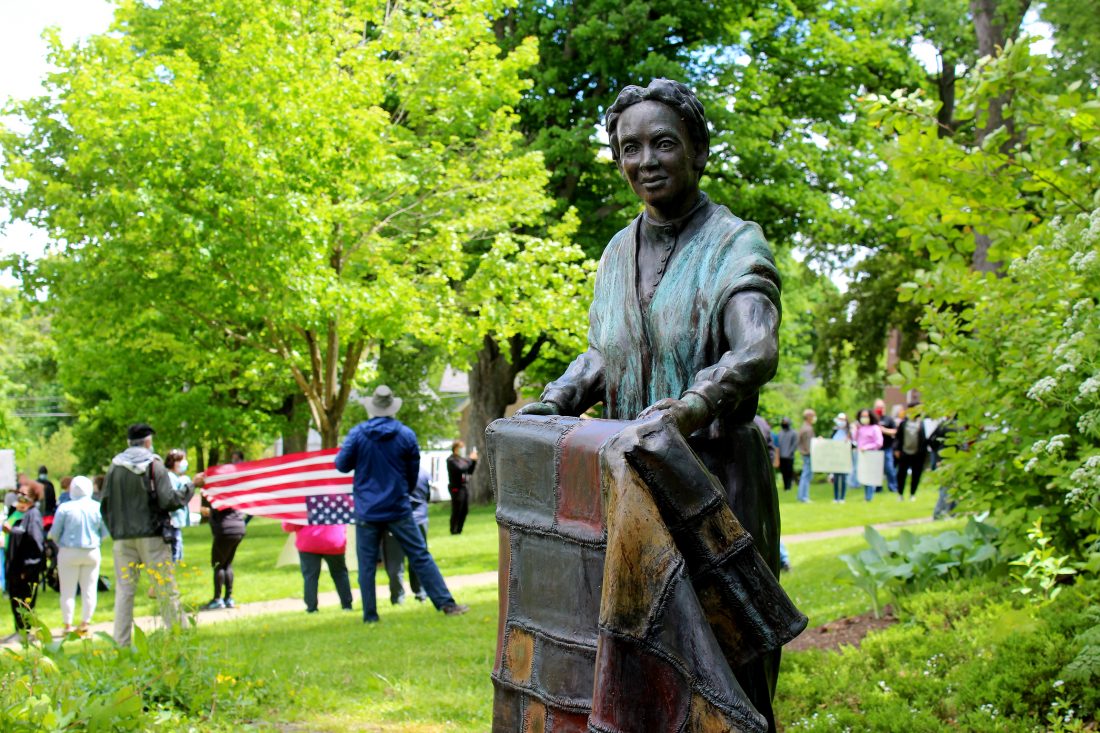 “I’m so appreciative of our mayor showing up, our sheriff, our captain,” Smith said. “We’re so appreciative that the leadership of this community came out to say ‘We are united with you, we see the changes that need to take place and that we are willing to make those changes.’ They are in agreement that this is just the beginning of what needs to be done.”

Sixteen-year-old Joshaia Houston was also one of the organizers of the event after starting a Facebook page entitled “Justice for George Floyd.”

“A lot of people had doubts, I knew that this would be the outcome: no violence,” Houston said. “We know what we’re doing and this is very peaceful and I’m very proud of everyone.”

Sunday’s demonstration came following days of nationwide protests after Floyd’s death on Monday. The Associated Press reported that a state of emergency was declared in Rochester on Saturday after demonstrators destroyed police cars, setting one on fire, and officers responded with tear gas canisters. Albany police meanwhile used tear gas and rode horses in efforts to discourage demonstrators that were throwing objects, while a person tried to start a fire in Buffalo’s city hall.

Camille Hodnett, a mother of three, also addressed the crowd on Sunday, imploring the local African American community to take pride in themselves.

“We can fight and scream for justice,” she said. “We want justice and we want it now. I still want justice and I still want it now. I’m not speaking just for me, but I’m speaking for all those children: those three young black men that I’m raising. Four now. I don’t want them walking around holding their head down. Hold your head but also carry yourself but carry yourself accordingly.”

“I speak for all of you — black, mixed-race, every single one of them who are fighting for justice,” she added, before pointing to the officers that had joined the demonstration. “I have these two men on my side wearing these badges and they’re still on my side. I’m not knocking them, we’re not saying it’s all the police. Parents, if you are not raising your children, raise them to be proud black men, proud black women. Teach them your history, understand where you come from and give back.”

“We have to have a change,” added Azaia Willburn. “I know there’s a lot of crime within itself, but we need healing first. We can’t get healing and start to heal until we get justice. That’s not something anyone wants to hear that we need to fix ourselves first, but you can’t fix yourself if you have scars. You have to open up the wounds, clean them out and then start healing yourself and healing your communities so we are able to then stop the crimes within our own selves. We must first stop and get justice for the hatred that we feel. Let’s change those policies. We need to police our police and we can do it without violence.”