Posters and signs from the final Justice June rally on Sunday at Dow Park. P-J photo by Cameron Hurst

Mayor Eddie Sundquist discussed the re-introduction of the Human Rights Commission and the selection of a new police chief during the Jamestown Justice Coalition’s final “Justice June” rally on Sunday at Dow Park. P-J photo by Cameron Hurst 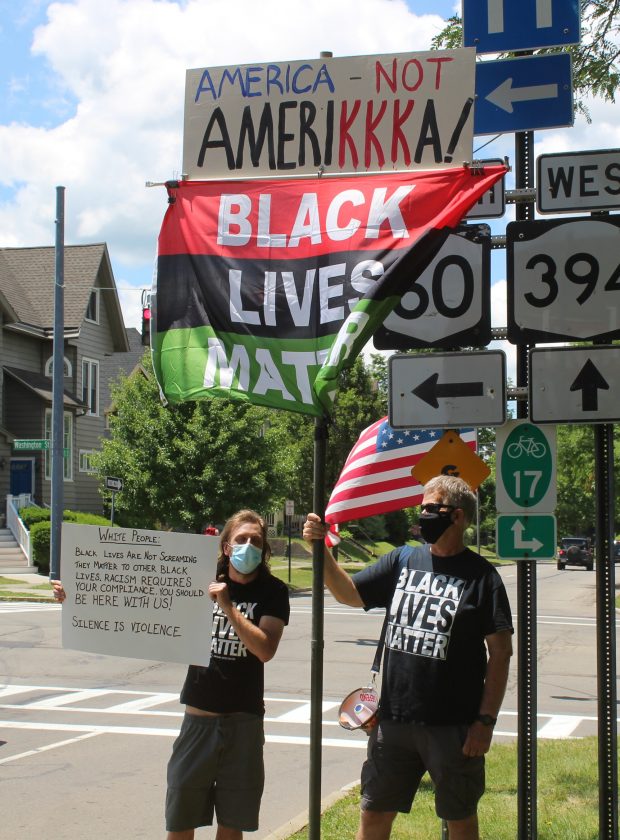 Posters and signs from the final Justice June rally on Sunday at Dow Park. P-J photo by Cameron Hurst

Organizers of the final “Justice June” rally hosted by Jamestown Justice Coalition at Dow Park on Sunday narrowed their focus to three local topics in particular — the re-introduction of the Human Rights Council, the selection of a new police chief and a movement to change the name of Jamestown High School’s longtime mascot.

The first two were main topics in a keynote address given by Mayor Eddie Sundquist, who, in discussing the commission, emphasized that it will be “help us as a city know where we need to go, help us as a city be more inclusive.”

He added, “So, as I tell you and as I’ve told all of our council members and media, the Human Rights Commission, their job is to help us as a city do our job better, help us re-craft and change the policies that have been going on for the last 30-40 years — these things don’t work anymore. They don’t work, they are broken. When something is broken, you fix it. We need to do better as a city and my goal is to have a Human Rights Commission that does that and works hand in hand with our city council, our police, our fire and our public safety to make sure we do better.”

Jamestown City Council President, Tony Dolce (R-Ward 2), who was in attendance, found Sundquist’s use of the term “whitewash” to be slightly problematic. 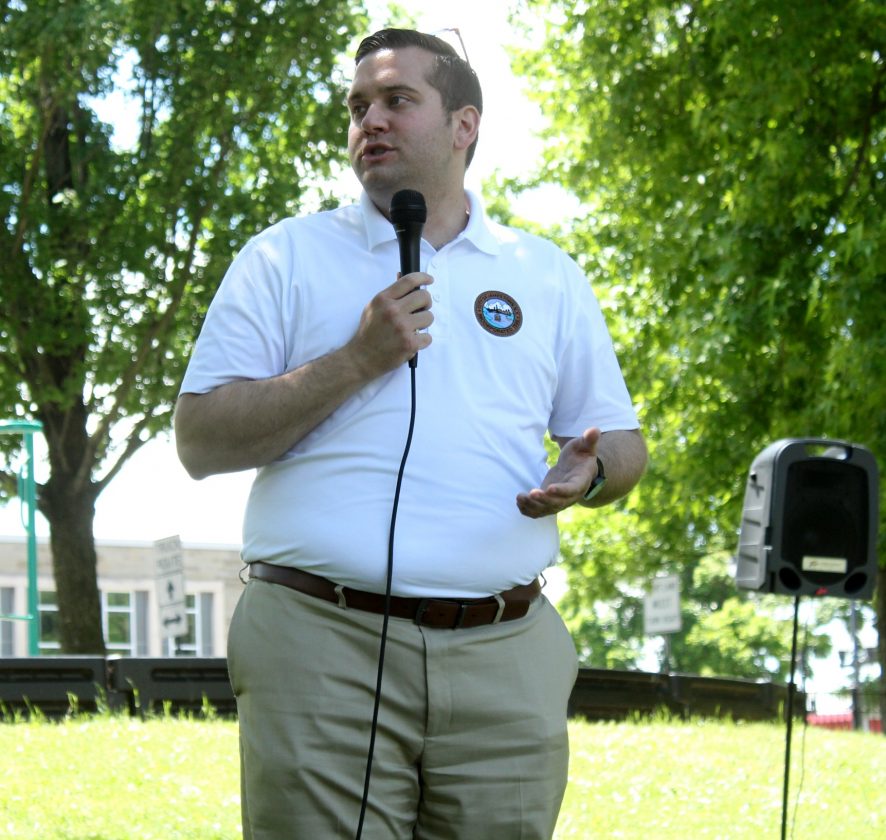 Mayor Eddie Sundquist discussed the re-introduction of the Human Rights Commission and the selection of a new police chief during the Jamestown Justice Coalition’s final “Justice June” rally on Sunday at Dow Park. P-J photo by Cameron Hurst

“It’s inaccurate,” Dolce told The Post-Journal after Sundquist’s addresss. “There has been no policy about hiring any particular race.”

The commission, which is made up of a body of 12 members, has already received 78 applicants and will announce its membership in the next several weeks, Sundquist told the roughly 125 gathered and encouraged those not selected to remain involved.

“I’m committed to every person that applied that we will let you know whenever there is going to be a meeting so that you could come, be a part of it and feel that you are part of this commission, but more importantly that you can bring a voice to what is going on in this city,” he said. “We want to continue the work that has been started right here in Dow Park.”

Sundquist also informed demonstrators on the selection of a new police chief to replace outgoing chief and director of public safety, Harry Snellings, whose retirement is effective July 10.

An acting chief will be selected to serve as the force’s leader during the selection process. Applications will open on July 1 and will run through the end of that month.

“We now have a hard job to really look for someone who is going to fit that role,” he said. It’s not going to take 30 days to find that person, that’s not the reality. The reality is that we need to look long and hard and we need to know as a community what we want in that position. We can go and appoint someone tomorrow and it’s not going to mean a thing. We need to have the right person for that job.”

The city will take internal and external applications, he said.

“I’ve already started receiving some from different parts of this state who want to come here to Jamestown to represent our community,” he said. “But, here’s the struggle we face: it cannot be just me alone that makes that decision. I am not the one point person for an entire community because we have one larger voice.”

A recommendation committee –that will include members of the community — will be formed, then, to help make the selection, Sundquist added.

“I am committed to putting community members on that to be a part, to listen and help us pick the next chief of police, “he said. “More than ever, that’s what we need. We need members of the community to help us in this process and once we get that new chief of police in place, we are going to rely heavily on the Human Rights Commission to help us fix some of these policies that have been lingering around for 50 or more years.”

The Rev. Chloe Smith, a member of the coalition, also addressed the crowd to discuss the city’s current situation and noted that the coalition will continue to be a partner in helping to move the city forward.

“We are the ‘Pearl City,’ but I am here today to make an announcement: to get a pearl, you know the shell, a piece of sand gets into that shell and begins to irritate and because of that irritation, something beautiful comes out,” she told the crowd. “This is not comfortable for me and it should not be comfortable for you. Change is not comfortable.”

Coalition member Autumn Echo, meanwhile, has served as the organizer tasked with leading a movement to change Jamestown High School’s longtime mascot, the ‘Red Raider,’ and discussed the movement with community members on Sunday.

“We caught some attention from alumni of JHS who are very passionate about their school pride, which is fine,” Echo told the crowd. “It is fine to have pride in your school and your accomplishments. But, it is not okay for your school pride to be more important than respecting different races and cultures ever.”

“If you want to say ‘All Lives Matter,’ then black lives need to matter and native and indigenous lives need to matter All of them,” she added. “If we are going to have a community that is ridding itself of racism, that is truly setting a precedent for anti-racism from the bottom up, we have to start with our children and what example are we setting for the youth of this city when they are playing sports, wearing logos, wearing jerseys that say ‘Red Raiders?’ when they are associating their pride with Native Americans being savages. It’s wrong and we can fix it for our children.”

She added, “If we change this, if we can make this change, then every single student who is attending JHS right now and going forward will have more pride than ever in the fact that they have a school and a system and a community that respects the people around them.” 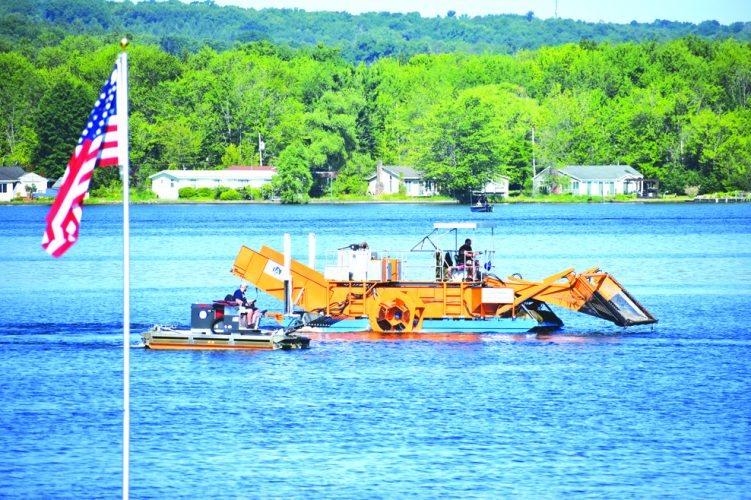