A man and his dog are pictured walking along a largely empty East Third Street in Jamestown on Monday afternoon. Gov. Andrew Cuomo said the Western New York region, which includes Chautauqua County, will be allowed to reopen some sectors of business starting today. P-J photo by Eric Tichy

Gov. Andrew Cuomo is pictured Monday during his daily press briefing in Buffalo. 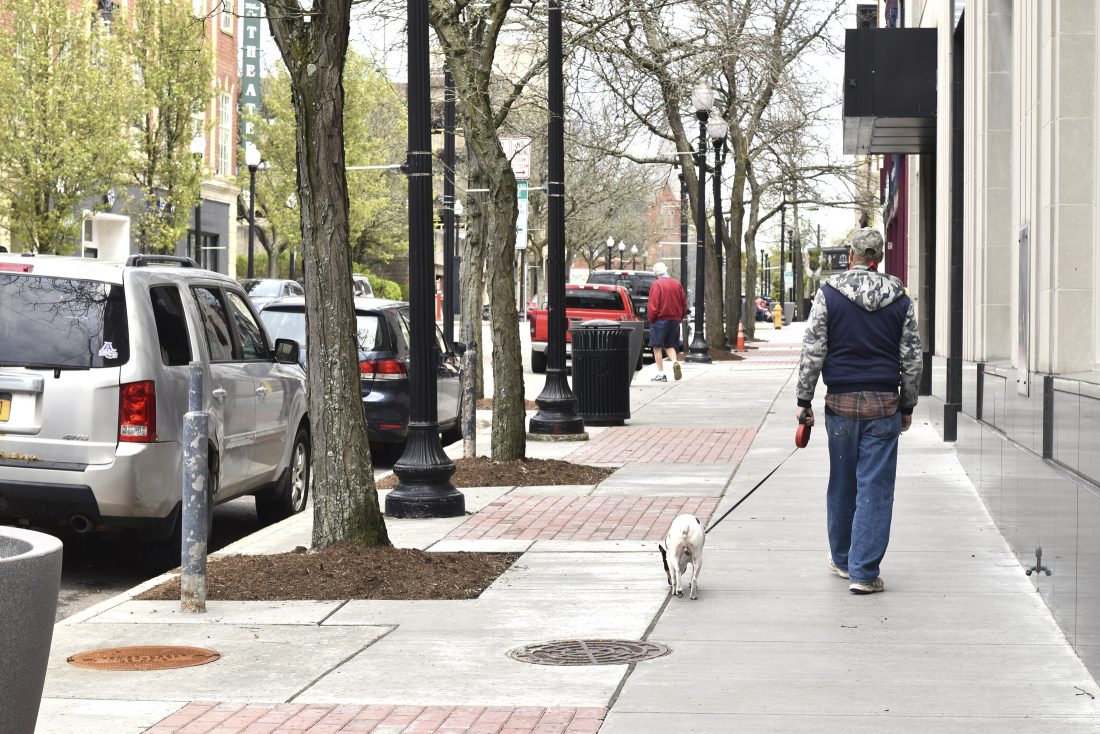 A man and his dog are pictured walking along a largely empty East Third Street in Jamestown on Monday afternoon. Gov. Andrew Cuomo said the Western New York region, which includes Chautauqua County, will be allowed to reopen some sectors of business starting today. P-J photo by Eric Tichy

In what has been a “long, painful period” amid the coronavirus pandemic, the first glimmer of hope to kick starting a largely stunted economy will begin today.

Gov. Andrew Cuomo made it official Monday during his daily press briefing at Roswell Park Cancer Center in Buffalo: the Western New York region will enter Phase One of reopening. The region includes Chautauqua, Cattaraugus, Allegany, Erie and Niagara counties.

Part of the governor’s NY Forward initiative includes four phases of opening for non-essential businesses across the state, each one requiring metrics to be met in each of the 10 regions. The WNY region joined others outside the New York City area that recently met all seven metrics needed to enter Phase One — construction; agriculture, forestry, fishing and hunting; retail, which will be limited to curbside or in-store pickup or drop off; manufacturing; and wholesale trade.

As of Sunday, Cuomo said the region had met six of the seven metrics needed to enter the first phase. The bulk of six of the metrics deal primarily with COVID-19-related hospital rates and death rates. The last metric involves contact tracing, people who identify those who may have come into contact with an infected person. The governor said officials within the region have identified enough people to be trained in contact tracing; the metric calls for 30 tracers for every 100,000 residents. 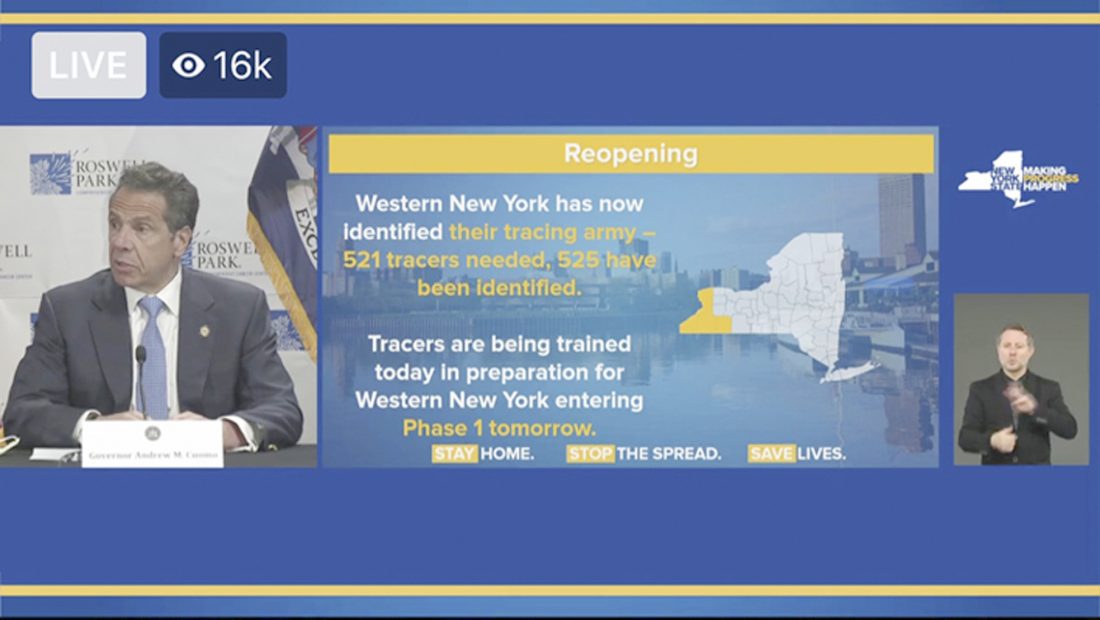 Gov. Andrew Cuomo is pictured Monday during his daily press briefing in Buffalo.

“Great piece of work that they did over the weekend,” said Cuomo, thanking local officials on the regional reopening committee that includes County Executive PJ Wendel and Jamestown Mayor Eddie Sundquist.

Wendel said area residents should still abide by social distancing and other policies when businesses slowly start to reopen. He said the relaxing of the mandates will only have a negative impact on the economy — noting that seven new cases of COVID-19 were reported over the weekend as the result of not following social distancing practices.

“We need to stay focused and continue that hard work and efforts,” Wendel said. “We need to make sure we’re following the rules. We will monitor this for two weeks. If you do something that negatively impacts this opening, businesses or a group of people, it could impact someone’s job, it could cost others a lot more. … We’re in this together.”

Mark Geise, deputy county executive for Economic Development and CEO of the county Industrial Development Agency; Dr. Robert Berke, county physician; and Steve Abdella, county attorney, will be in attendance at a press conference today at 10 a.m. to discuss Phase One of the reopening.

“The biggest thing has been guidelines and what protections need to be put in place in order to open up,” said Sundquist, who said the state’s website — forward.ny.gov — has resources for businesses and the public regarding each phase and its requirements.

Each business looking to reopen is required to develop a written safety plan outlining how its workplace will prevent the spread of COVID-19. The templates do not need state approval, but are required be kept on the premises.

“This virus is still around here and in New York State,” he said. “We need to make sure we’re vigilant and we’re still watching what’s happening.”

Sundquist said he is surprised by the lack of COVID-19 cases locally after State Assemblyman Andy Goodell, R-Jamestown, said last week that the city had no confirmed cases. The mayor attributed that fact to hard work by city residents and local officials.

“The fact that we have low to no cases mean that our residents took to social distancing early on,” Sundquist said. “We worked together with the schools to make sure they were closed. We have a great superintendent and school board that worked together to put these policies in place early on.”

Nonetheless, now is not the time to ease up.

“We don’t want people to become complacent,” said Sundquist, noting the two-week period between each new phase of reopening.

In Dunkirk, Mayor Wilfred Rosas said reopening in phases is the right move to make. He noted that the number of confirmed cases is much lower in Chautauqua County than that in neighboring Erie County and elsewhere.

“Our numbers have been significantly lower than some of these other counties,” Rosas said. “I still think that we have to follow the guidelines for social distancing and wearing face masks.”

The Dunkirk mayor said he has heard concerns from area businesses — some worried about the extended closure and others over reopening during a pandemic. He said local businesses need to have the option to open as many have taken “a huge hit” in the last couple of months.

“I think it’s the right decision,” he said, noting that there will likely be a “new normal” in the local economy, while some restaurants specializing in take-out orders have adapted well during the pandemic.

Further, Rosas said Dunkirk officials plan to announce at a Common Council meeting today that about $273,000 in federal stimulus funding will be made available to local business owners who are struggling financially as a result of COVID-19. “We do have stimulus funding to help our businesses,” he said.

Meanwhile, no new cases of the virus were reported Monday by the county Health Department, leaving the total at 53. There remains 14 active cases in addition to 35 recoveries, four deaths, 230 county residents in quarantine or isolation and 1,827 negative tests.

Manufacturing includes the production of apparel, electronics, machinery, plastics and rubbers, woods, textile and wood, among others.